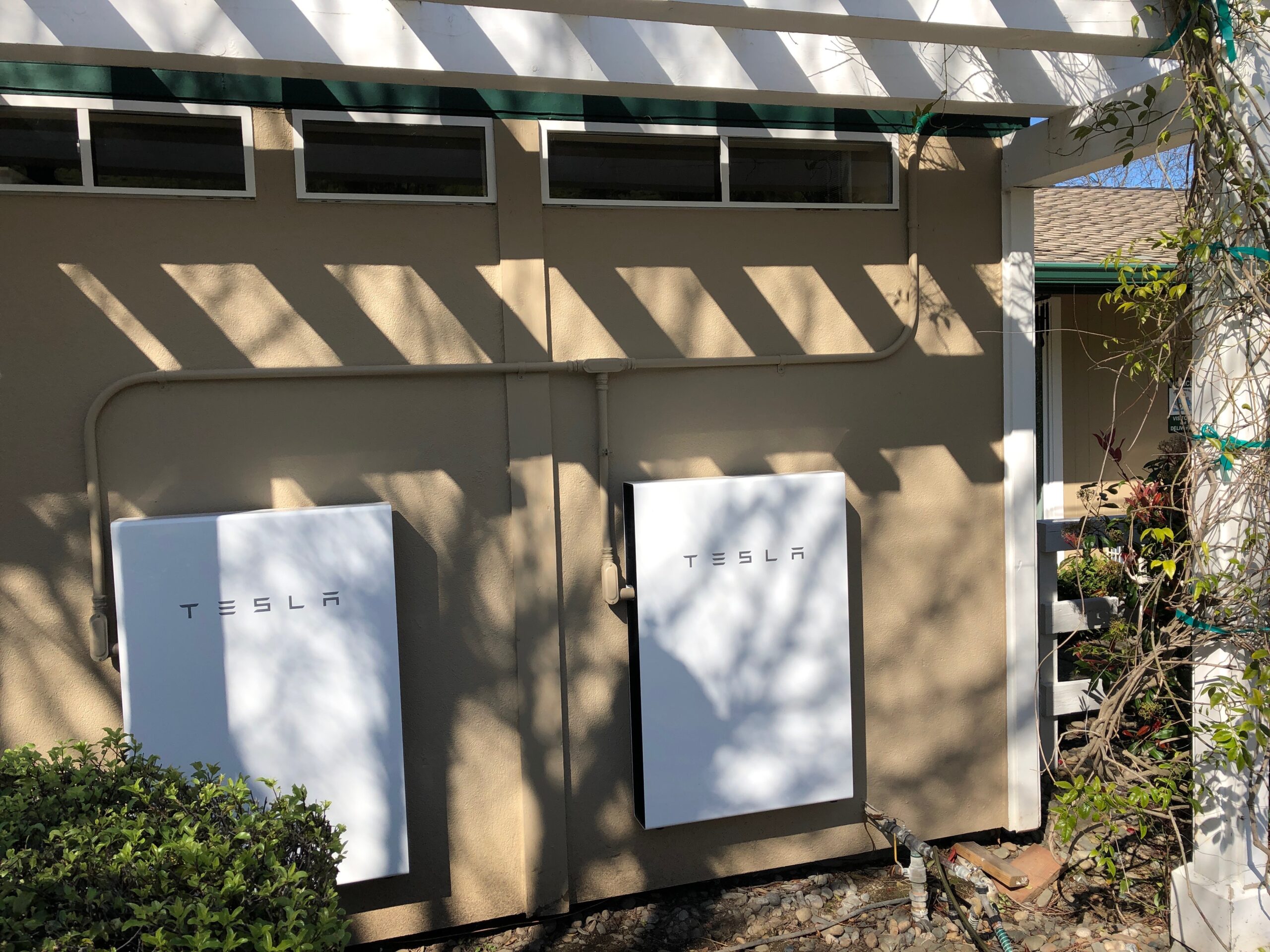 As detailed in the previous post, we decide to forgo installing a big diesel generator to provide backup power and instead opted to have a power wall installed instead. Thus way back in March of 2018 we pulled the trigger and started the order and install process with Tesla.

It took about two months to finalize the order and then it wasn’t until October of that year for the design work to begin. A tech came out and took many pictures of things and then he went away and we didn’t hear anything for another few months. Finally though our installation was schedule for early March.

March rolled around with its wind and rain and sure enough some electricians from Tesla arrived. It took them a full week to finish, although they weren’t here every day of that week.

They had a nice blank slate where the two wall units were to be installed. Here’s a shot of the spot from back when the new steel exterior ladders were being installed — there were a bunch of plants that dated back to the POs. We removed them all from that area of the house knowing not only would we need to for the install, but that it would make our house painter’s work a lot easier when he was here for close to a month repainting and sealing the exterior of the house.

The installers also brought with them many boxes as it turns out our spiffy new main panel that we had just put in not four years earlier had to be replaced for everything to work. The 2015 work also had involved upgrading our service from 175 to 200 amps which is something we would have had to do for this project, and power walls weren’t really a thing back then, so while this involved a do-over it was pretty minor one.

And of course it rained most of the days they were working. They had a small pop up tent they setup next to the utility closet and used the shelter of the eaves to keep the water off their tools and supplies.

There was much work to be done as many new things had to fit into the rather limited space within the closet.

Plus getting the battery units in place proved challenging, mainly because of the post that once held a hose reel. Since they couldn’t easily work around it, I just told them it could be remove it.

Finally they finished up and we had…stuff…lots of stuff. Here are three shots of the utility closet. First what it was like when we first bought the place, then after the main panel was redone in the fall of 2015, and then after the Tesla guys finished up: all that stuff on the right side is new.

Finally a shot of our new breaker box.

And of course there is what is apparently the brain box….the “Tesla Generation Panel” box. Right now as I type this we actually have a support call in with Tesla, as this modules ability to maintain connectivity to our wireless network es no bueno. Which means our power wall continually falls off our wireless network: no other device here has that issue. To mitigate it and thus allow us to work on some new home automation issues I’m currently waiting for Tesla to contact me back so we can sort out hardwiring this box and thus the power wall into our network.

That was the only post-install support that was done. Turns out we had a funky software issue that stumped Tesla support and it took a month or so for everything to finally function as intended. The issue was that while things were charging and discharging, we couldn’t actually connect via the Tesla app and see all the bits as intended.

While all that was going on though, the facilities end of Tesla contacted us and scheduled a time to come out and tidy up the exterior of the house. All the scrapes, scratches, and new conduit were sealed up and painted so that it all blends with the rest of the house. Thankfully we had lots of paint available as thanks to both the aforementioned exterior painting project and the fact that steel ladders were painted to match the house.

In this end this was very much a major home and life improvement project. Just a year later our utility here in California shut down power to large areas of the state during a period of time when high winds were expected, a they wanted to minimize the potential for their lines going down and creating yet another wildfire. We were without power during these shutoffs for several days, but we were virtually unaffected. During the day we would easily charge up the power walls and then in the evenings our draw down, even with the pool, hot tub and two water heaters chugging along, was surprising low: mainly because the pool pumps only run during the day and the hot tub does the most of it’s filtration and heating during the day as well.

We have had one power outage that happened at night during colder weather which resulted in the power wall draining down. Due to the aforementioned issue of it falling off the wireless network, we weren’t notified when the power went out in the early morning hours, and thus we didn’t shed any of the load: ie turning off the water heaters and shutting down the mini-splits. Thus we woke up to a dead house and had to wait for the solar to charge up the power wall. By 9am though we were back up and running, but that experience helped us sort out next steps for what to do home-automation-wise.

That would tick me off: “We have had one power outage that happened at night during colder weather which resulted in the power wall draining down. Due to the aforementioned issue of it falling off the wireless network, we weren’t notified when the power went out in the early morning hours, and thus we didn’t shed any of the load: ie turning off the water heaters and shutting down the mini-splits. Thus we woke up to a dead house and had to wait for the solar to charge up the power wall. By 9am though we were back up and… Read more »

yah but the battery plant is sized based on the solar and our solar is kind of small considering our draw: ideally we want to add more panels and at least one more battery in the future, but only after we finalize automatic load shedding.