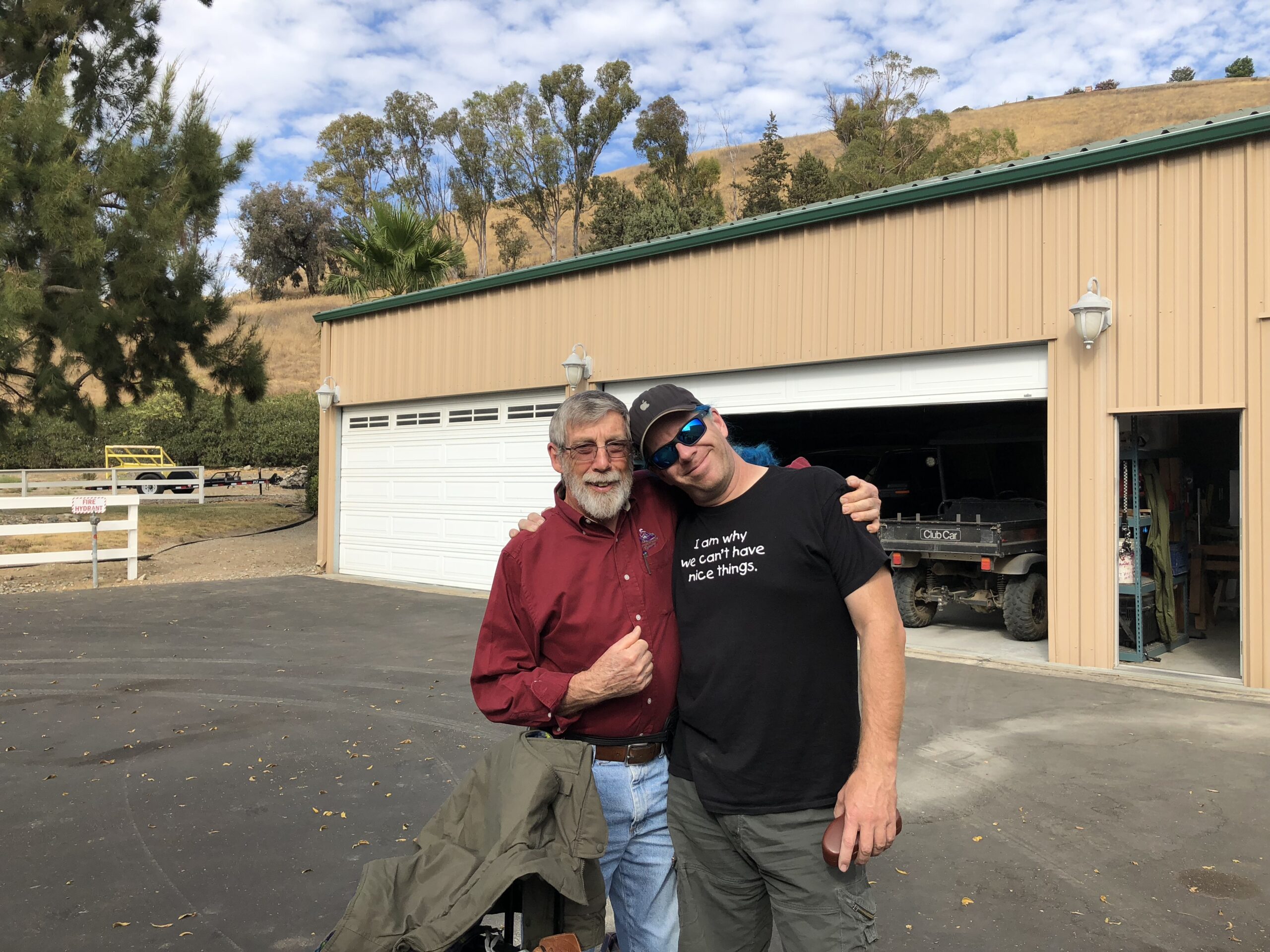 Visitors to PAWDF get to try out some of the machinery here or swim in the pool, or just admire the views.  Over the last year we’ve had quite a few visitors.  Instead of individual posts for each, here they all are in one go.

Way back in October of 2017 a contingent of Australians visited as part of a road trip along the California coast up to Washington. Sixxy (aka Jen) is a long time World of Warcraft friend who was on holiday with her husband, daughter, friend and friend’s daughter. They rocked up in their RV and stayed over. The next day I ferried them down the hill to pick up a rental mini-van which they used for the drive from Purgatory to Washington. The girls spent most of the day in the pool while the rest of us chatted and played a few card games (namely cribbage!)

Sixxy brought a special gift, too: a container of mac-n-cheese with a “Despicable Me” minion on it. This is fitting because the guild we’re both in (which predates the original movie by 5 years) is named Minions.

In July of 2018 Allandrick (aka Leigh) visited us. He’s an Aussie friend of Agent Smith’s now based in Northern Ireland. The first time Allandrick visited us he purchased my old Mark II 5D body. On this visit he used the camera when posing for a picture outside my window.

Here’s the shot from stega.org that was taken back in March 2017 when he first visited. During that visit we went down the mountain for dinner and during the meal we discovered he once played Warcraft and his home server was the same as mine. When he got back to NI he restarted his account and joined the guild. Huzzah. After all, it’s always more fun to kill monsters with friends.

Last summer, another Warcrafter visited us. I met Cristur (aka Agent Todd) when he was a student in one of my classes. We’ve become good friends in the ten years since, and yes, he’s in Minions too. While he was here last summer he crafted the awesome curtain rod for the studio building that was mentioned in the last post. He also got to sleep in the great room, as we had just finished ripping out the old furnaces (more on that soon) and I was in the middle of painting the guest room (more on that soon, too.)

Eric likes us so much that he visited us again over the Christmas holidays; both times he drove in from the Arizona and was quite content to hang out in the garage with Agent Smith, tinkering on all sorts of projects. An added bonus is that he’s the 3D printing guru. So in addition to lots of help and guidance, he also made me this adorable little stegosaurus toy.

Yet more Warcraft guildmates visited us in September. Frogprincess and Bigeasy (aka Brit and Nick) stopped over on their return trip north after a cruise out of Southern California. When they were here a local guildmate (Xel) met us for dinner down the mountain.

Since Xel is local he’s been up to Purgatory a few times. The first time back in 2016 was quite an epic quest as the road was closed off due to a downed tree, but he did make it here; and as another guildmate, Jesua (aka Tim,) was visiting we all went out for dinner.

I had another meal with Xel in between those two visits when another guildmate Laindra (aka James) visited us before heading to Comic-Con this past spring. Sadly, I didn’t take any pictures of that meeting, so this screen cap of his character (wearing a crown he “stole” from me years ago) will have to do.

Besides fellow Warcrack addicts, we’ve had a few other visitors worth mentioning. Back in September Agent Smith’s father visited us for the month.

Since we bought this place, his idea of a holiday has been to come stay with us for a month and work on various projects. The first year he helped pull down the old horse shelter and dog kennel, while on the second visit he helped us build the Great Wall of Purgatory. His third visit was filled with rebuilding Dumpy McDumpface and pulling down trees.

This past summer’s visit was no different. Various projects were completed, including refinishing my grandmother’s cedar chest and building the new race car (more on those projects eventually.) He was also treated to our first grass fire.

Lastly, just after Christmas, my cousins Elaine and Craig visited us. They’re the children of my great-uncle. Craig is from back east and was visiting Elaine, who lives a couple of hours away. I had baked banana bread, so we sat in the kitchen for a few hours talking family history and sipping hot caffeinated drinks. It was super cool that Craig recognized the kitchen table which originally belonged to my grandparents and which Agent Smith’s father restored for us.

In addition to the human visitors, my almost-daily visitors continue to be our nearest neighbor’s dogs. My secret is always having a bag of yummy treats near the door. They’re all very polite and each waits its turn as I pick out a treat that is appropriately sized for the recipient.

While I don’t have a recent shot of Happy, here are shots of Abbigail, Katie and Rusty.