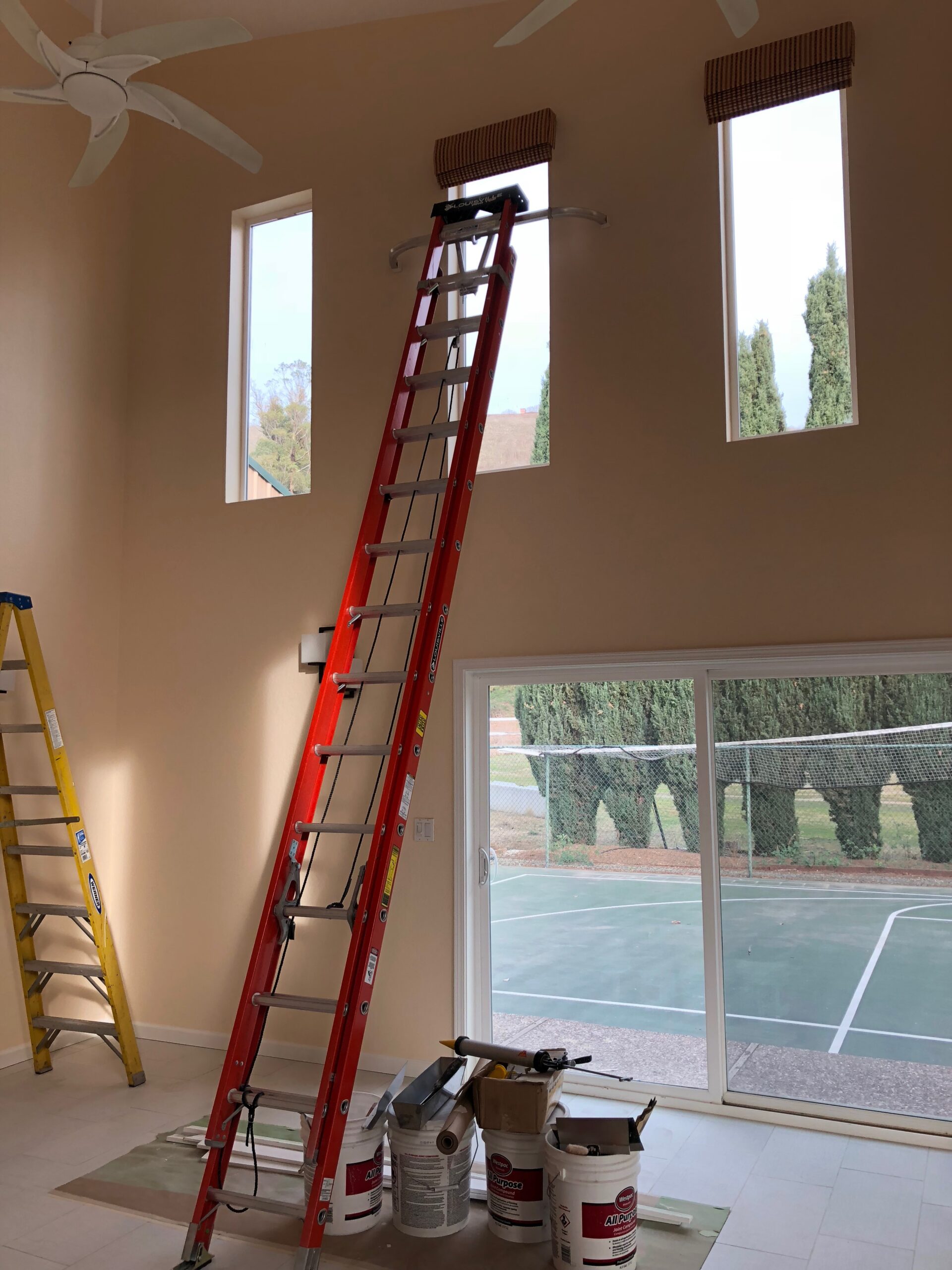 Continuing on from the last two posts, as part of the studio renovation we ordered in remote-control motorized blinds via Blinds.com and matching drapes.  Installing the blinds proved a tad tricky and instead of paying the GC who did most of the remodel/renovation work a chunk of change for him to do the job, we managed, with the help of our huge extension ladder, to get them in place ourselves.

The more difficult task actually proved to be finding curtain rods that would support the very heavy matching drapes. I didn’t want the curtains for the sliding glass doors to be separate panels, but instead a single panel for each door. This meant that each one was 104″ wide x 91″ high, and thus each drape weighs a lot: somewhere between 30 and 40 lbs.

The problem then became that all commercially available rods capable of supporting the load and spanning the necessary width have a central support, which for a single panel curtain simply wouldn’t do, so after a lot of research and thinking on both my and Agent Smith’s part, we decided to wait until a house guest with welding skills came to stay with us last summer.

So last summer a friend (aka Agent Todd) came to visit in June and he built us a curtain rod. He started off by making some brackets. Here’s a shot of them in progress.

We purchased some steel pipe from Home Despot to serve as the actual rods and some end plugs that could be threaded on to the ends.

The most difficult bit was the corner bracket. We need to do a bit of wall repair eventually, as Agent Smith and Agent Todd took a small chunk out of it when installing the rod.

Here are a few shots of the finished result.

And one last bit of decor arrived from Australia and was finally assembled and moved into place this past September: a Smith family heirloom to be exact. It now serves to stow away our small console video game collection.

And then there was the matter of the downstairs room. We purchased some shelves for inside the closet as well as a set for along the inner wall. While the closet now serves to stow away things like luggage and Christmas decorations, the shelf in the room is the staging area for stuff I need to get rid of (except for the birdcage, as that will eventually go outside.). Right now the space is a bit messy as I have a box of old furnace register covers and return vents to rehome, but in general the area works pretty well for us.

And so finally, after months of work and and even longer to actually post the full tale, the studio project is done!