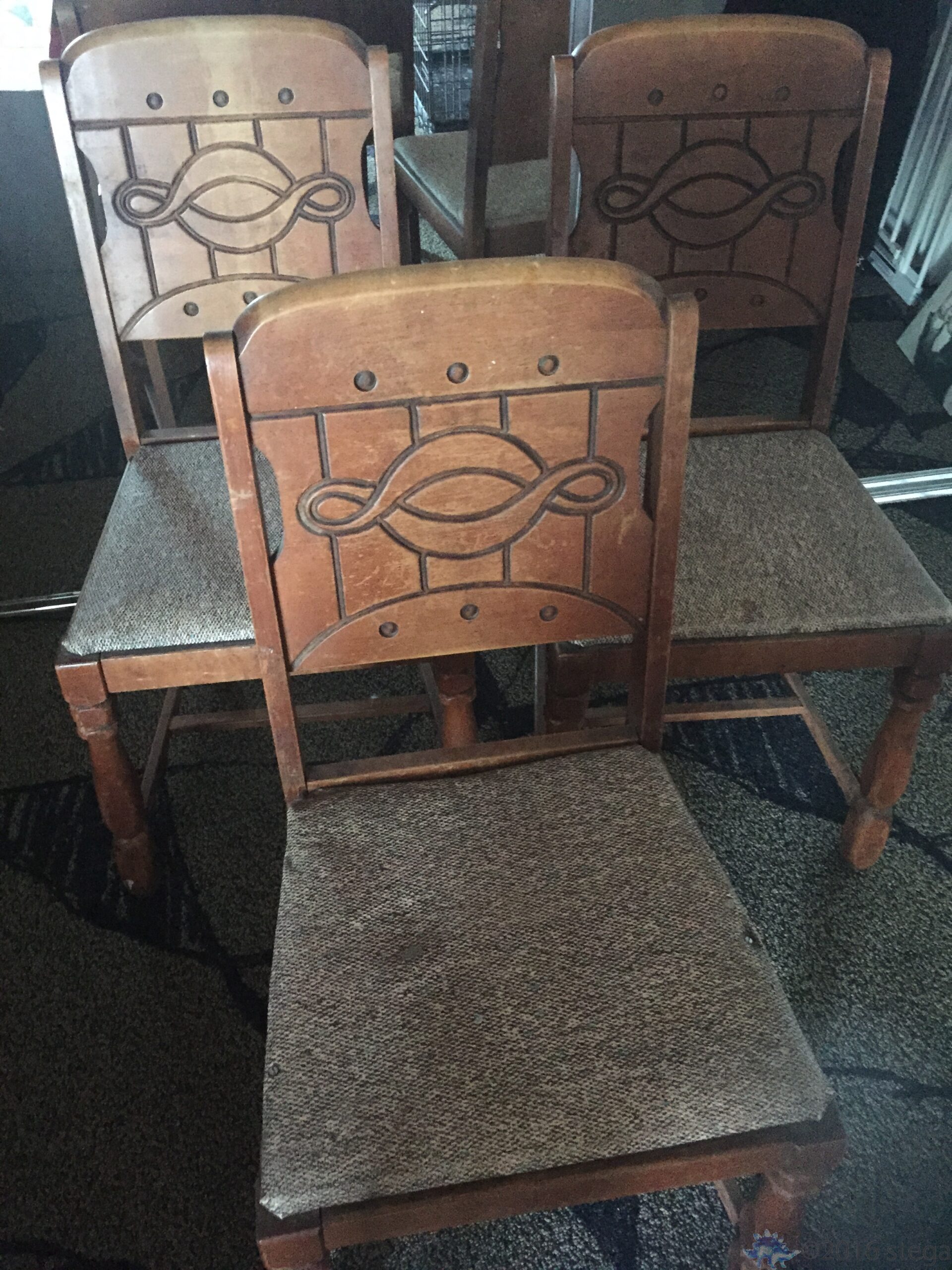 Way back in 2000 my grandmother moved out of the house she had lived in for close to fifty years and as part of the move a lot of items from the house were sold.  As one of her only two grandchildren I was able to cherry pick a huge amount of items for use in my own home.  My china set, a lot of my tools and a few bits of furniture were some of the highlights.

One furniture choice that I nabbed was an old wooden table and three chairs.  I always meant to refinish them but I lacked the skills to take everything apart, sand and plane and then reassemble properly. This past spring I had talked to a number of people who specialized in such projects but then the guy I wanted to do the work ended up out of commission after back surgery.

Here’s a shot of tag that was on the chair bottom:  we figure the set was purchased in Buffalo sometime in the early 1940s as that was where my grandparents were living.  Back then there was much discord in their respective families because my grandmother was not Hungarian (and one of the sole earners in her family) and my grandfather was not Catholic.  Supported by my great uncles though, they were able to elope and they did not return to Cleveland until my father was several years old.

There are just three chairs to the set and at some point in their history my grandfather added metal braces to the chair bottoms. The chairs had been stored away for the last few years as they were no longer particularly safe to use.  The table wasn’t in much better shape either as back when I first moved to California I attempted to start the refinishing process  only to give up after getting the top partially sanded and realizing what a sorry state it was in.  The joints were separating, the planks were warping and I soon realized it was going to take more than just a quick sanding and re-staining.

The table had thus been stored away for years as when we lived in San Francisco we used a tiny little drop-leaf table my friend E gave me as our dining room table. When we moved to Purgatory however, I set my grandparents’ table up in the kitchen and we used it daily.

Unfortunately it too wasn’t very stable and would shudder about whenever anyone sat down or stood up from sitting at it.  Here’s shots of of the table pre-work.

He arrived at Purgatory at the end of September to work on the Great Wall.  He has his heavy equipment operator’s license and, when paired with an excavator, was our primary workforce.  When the engineering process stalled out, he had spare cycles to burn and not being one to sit idle, he tackled my table and chairs.

After a trip to Home Despot and later to a proper woodworking shop up in Sonoma, he got to work.  Everything was taken apart, cleaned of old glue and debris, sanded and then slowly put back together.

Here is a before and after shot of the table.  I think the results are smashing.  (We are leaving the leaf in the table permanently.)

And here are some progress photos of the chairs. As you can see he did excellent work.  The cushions are all currently black but now that I’m no longer sick, I will be making additional covers for them.  I will also then be sanding down the four black chairs in the table photos. Those metal and plastic chairs are from a great aunt and were originally olive in color.  Once I repaint those chairs and create new covers for them we will have a nice little setup in the kitchen.