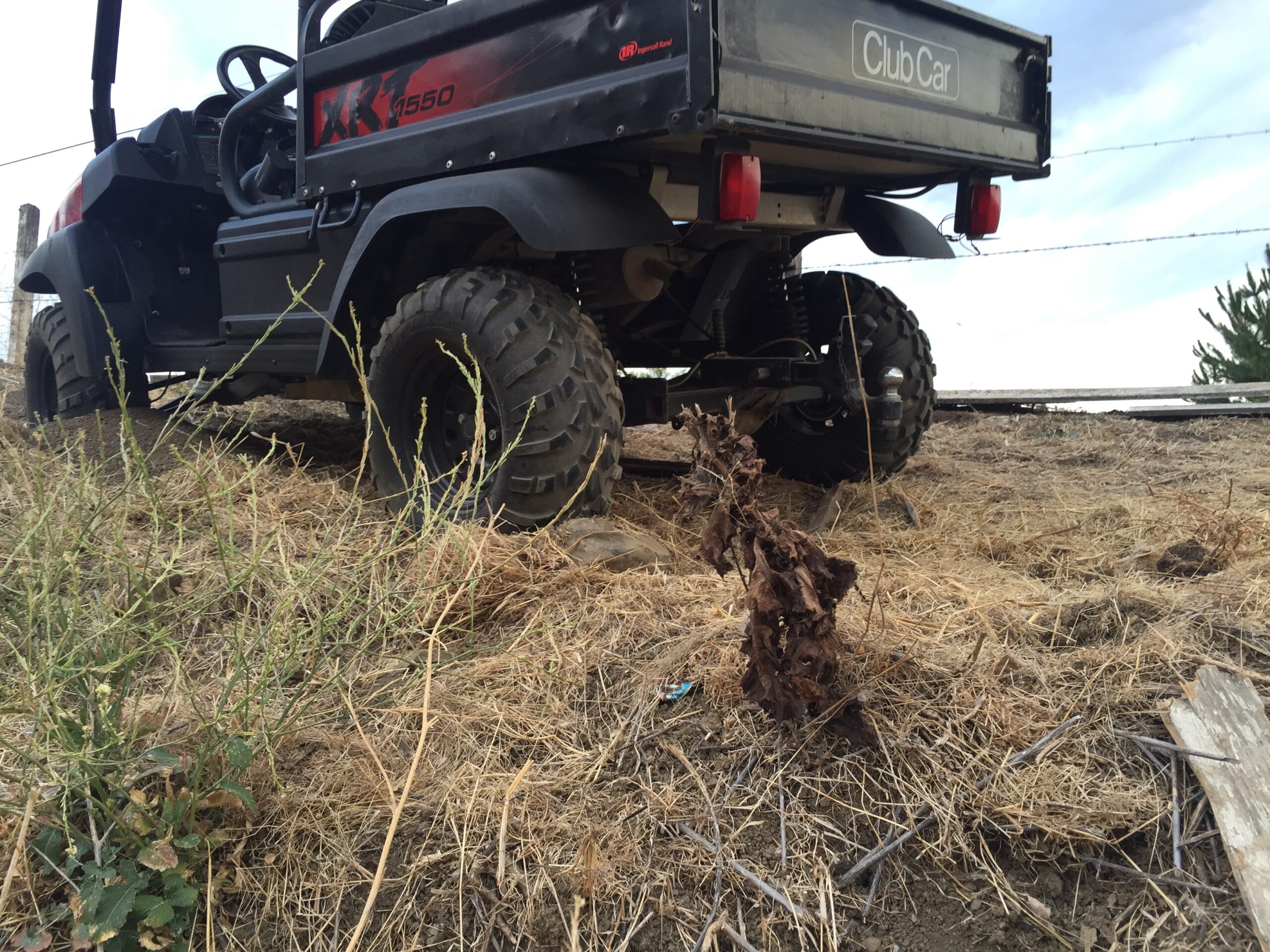 Having a handle on the various uses of the apostrophe doesn’t hurt either.

With the MiniTruck (Truckster, Truckette, Truckling… we need a name for this thing) acquired, it was time to put on the high-vis waistcoat, make like a good municipal worker and clean up some of the trash that’s accumulated down the bottom of the hill. Which, I might say, went just fine; the hill was descended, much trash was acquired and suitably deposited in the back of said sub-truck unit.

Which of course leaves getting back up the hill, and the real start of this tale. Because the previous owner had let someone else graze their horses on the property for far too long, most of the terrain is rather … loose.

Add to this a clutch that’s a bit grabby (the CVT is basically a giant scooter driveline and almost certainly needs a new belt and probably weights & rollers) and you have a recipe for digging holes rather than climbing hills.

Getting out of the bottom part of the property involves negotiating a narrow path along the bottom fenceline. At the critical point where I was digging, there’s a fairly steep drop-off down to the basin, and instead of going up, Truck Junior decided the path of least resistance was to go sideways. 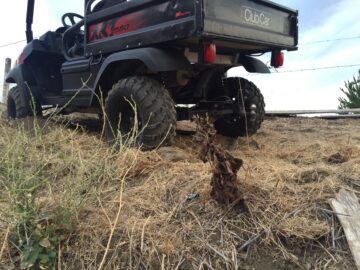 Not exactly easy to see here, but this shot was taken at eye level standing on the slope. The rock behind the left wheel started in front of it, but didn’t help any.

I wasted some time with a fence post, a come-along and some alleged 2500# wire I had just acquired from our favorite supplier of all things mechanical and Chinese in origin, but decided that I simply couldn’t trust that it’d hold. Perhaps I’ve watched too many YouTube videos where the poor soul standing next to an over-stressed wire instantly becomes two half-souls, but I decided this had to be done another way.

So, get a bigger truck, right? First order of business, get the VictimTruck back onto something more nearly resembling level ground.

You can see part of the wire rig in one of the shots above; I left it in place as a backup through most of the process.

Next step was to get the More Truck inside the fence. A secondary objective of the trash collection process was fixing the bottom “gate”, which had to be un-done, but then the remains of an older gate had to be dealt with if I wanted to get down the fenceline.

At one point it was probably a fine and sturdy construction, but time had not been kind to it – and neither was I.

Watching Fail videos is not particularly confidence-inspiring, I have to say. I was completely prepared to have both trucks slide down the hill, but apart from getting out every couple of feet to straighten the steering on the Truckling, the recovery was straightforward. Unlike its undersized competition, the More Truck has the whole creeping on loose surfaces thing down pat.

Trash was successfully delivered to the trash heap, and the Truckette returned to storage. As long as we keep it on the path, it’ll be fine. We’ll have to investigate improving the clutch action so that it can creep up with the competition.

Whilst it’s never fun to be racing against the fading light trying to dig your ass out of a hole, there are compensations.