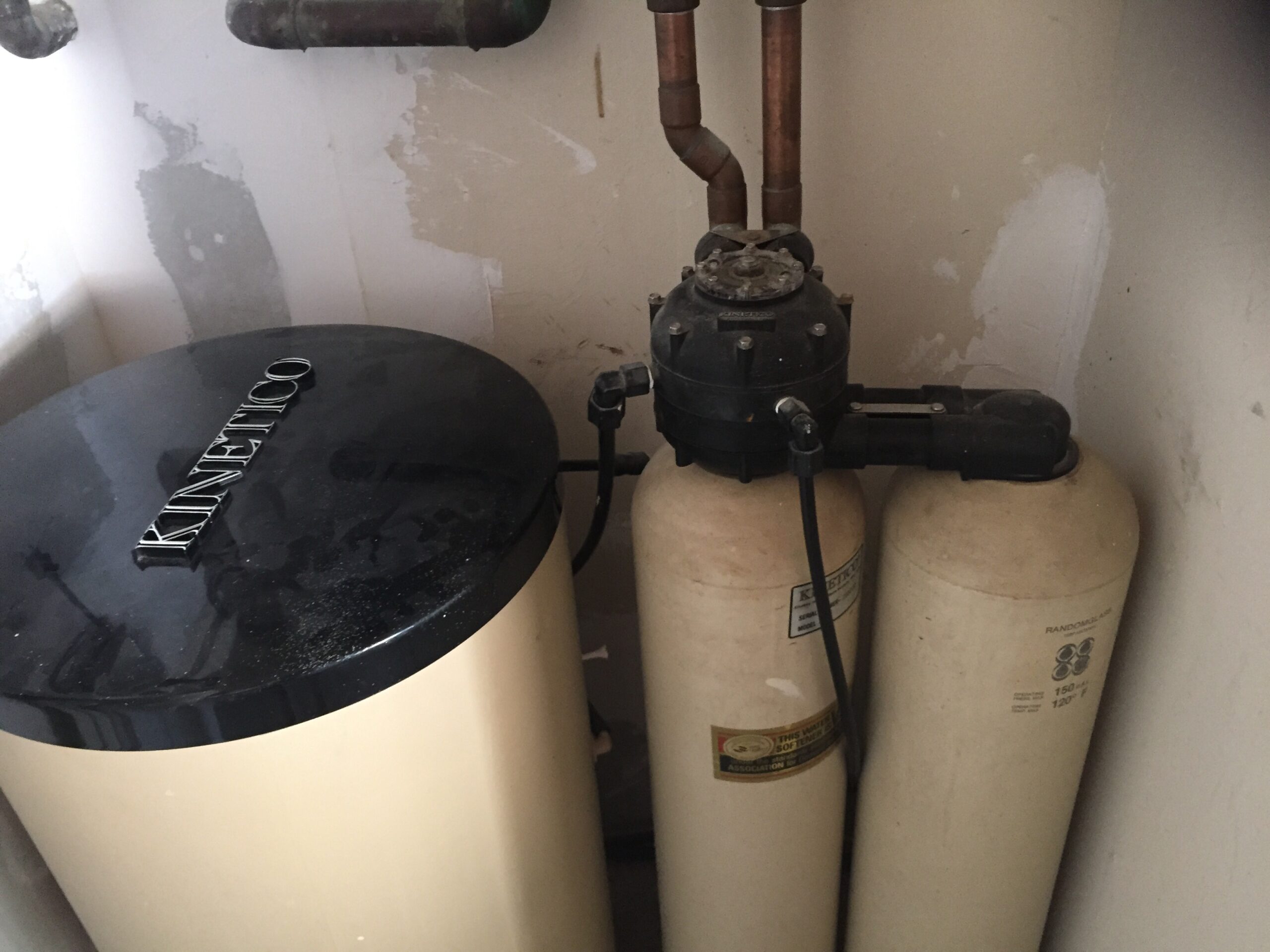 One of the smaller things on our list of house to-dos was to sort out the existing water softener.  Because we’re on a well, we really need one, else we get nasty scale stains everywhere.  Case in point:  we use small amounts of not one but two rinse aids in the dishwasher even with the old softener otherwise we end up with a film on our dishes.

The existing water softener was very very old.  I did some research online, and Kinetico, the manufacturer, stopped making tan tanks in the late 80s.  Although amusingly enough it was made just one town over from where my grandparents used to live.  The unit is not original to the house though as Kinetico was founded in 1970 according to their .  Still, the thing was old and replacing it  with a more modern system seemed like a good idea.

I did a bunch of reading online to determine what the new system should be and decided on a Fleck.  I then used my online searching skills to find a few places in the area that would sell and install the unit I wanted.  I decided to go with City Water Filter out of San Jose.  The guy actually steered me away from the Fleck head to one made by Hankscraft. 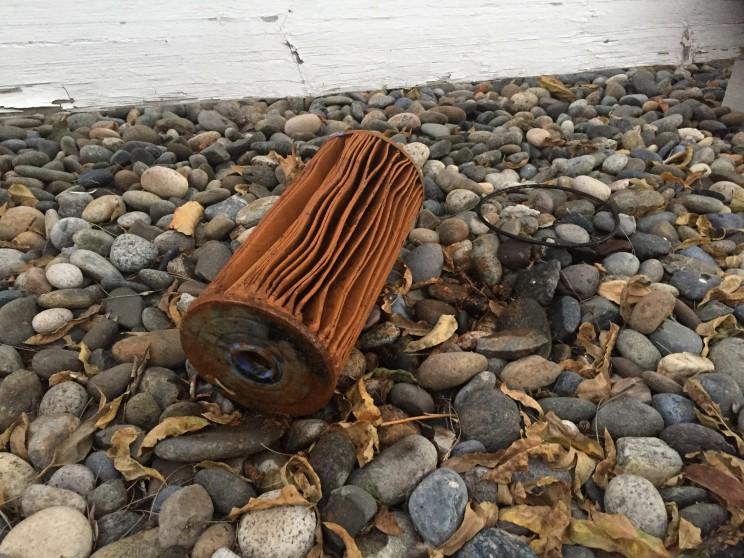 I called them yesterday afternoon to setup the install and they asked if they could do it immediately.  Figuring sooner is better than later I said sure.  While Friday traffic for them was a bit of a nightmare, they arrived at 6pm and promptly got to work.

The only real hiccup was when they went to pull the old system out there was no valve to shut the water off and we had a small flood until Agent Smith went out to the main junction and shut down all water to the house, so things got a little bit soppy.

Once the sediment filter was removed we got a good look at how much crap the previous owners had let accumulate due to (probably) not replacing it for a few years.  Pretty nasty.

Even the interior of the sediment filter canister was gross.  We’re pretty certain some of the crap was from the rust and sediment build up in the old well, so we’ll see what the new filters look like in a year when we replace them.

Which brings up a new term we use here at Purgatory.  Whenever AS or I run into some half-assed fix the previous owners did, like say putting in glass sliding doors at 10K a pop but failing to address the dry rot surrounding them, or putting in exterior wooden french doors with no awning or other feature to keep water from running down them in the rainy season, we say “They really ________’ed that one” where the _______ is the last name of the POs which I will refrain from typing here to minimize their exposure.  There are countless such examples as we’re pretty certain they were having income issues, but seriously, who builds a deck over their septic tank complete with a couple hatches so they can pump the thing and then never actually has it pumped?

But I digress, so here’s a shot of the new softener head.  It’s pretty stout and actually tells us what is going on.  Quite an upgrade from the old system that you could only tell was working when you’d hear the sound of water moving through it.  It’s more robust than the Fleck head as the plastic quality is higher and the interior bits are all ceramic.

The installers from City Water Filter did a simple hardness test on our non-softened water and we come in at a stunning 32 grain/gallon which means it is very very hard.  They also checked out the reverse osmosis system that came with the house and recommended a mineral filter be installed and then whole thing hooked up to our refrigerator since I like to use the tap from it for cold drinking water. As I type this I’m currently waiting for them to arrive to do that little bit of work today.  While we hate our primary fridge (more on why at a later date) at least this work will easily transfer to the new one we have picked out as it will be plug and play.

The guys worked for about 2 and a half hours and now we have both a sediment and charcoal filter in place.  They left us the original salt tank and I will clean it out this week and store it away as we may find a use for it later.

Here’s a last pic of the finished work.  You will note the random iron attached to the wall is now also gone.   Anyone need/want a relatively nice iron? We have no use for it.  Also now I get to try using the dishwasher with just one rinse aid!