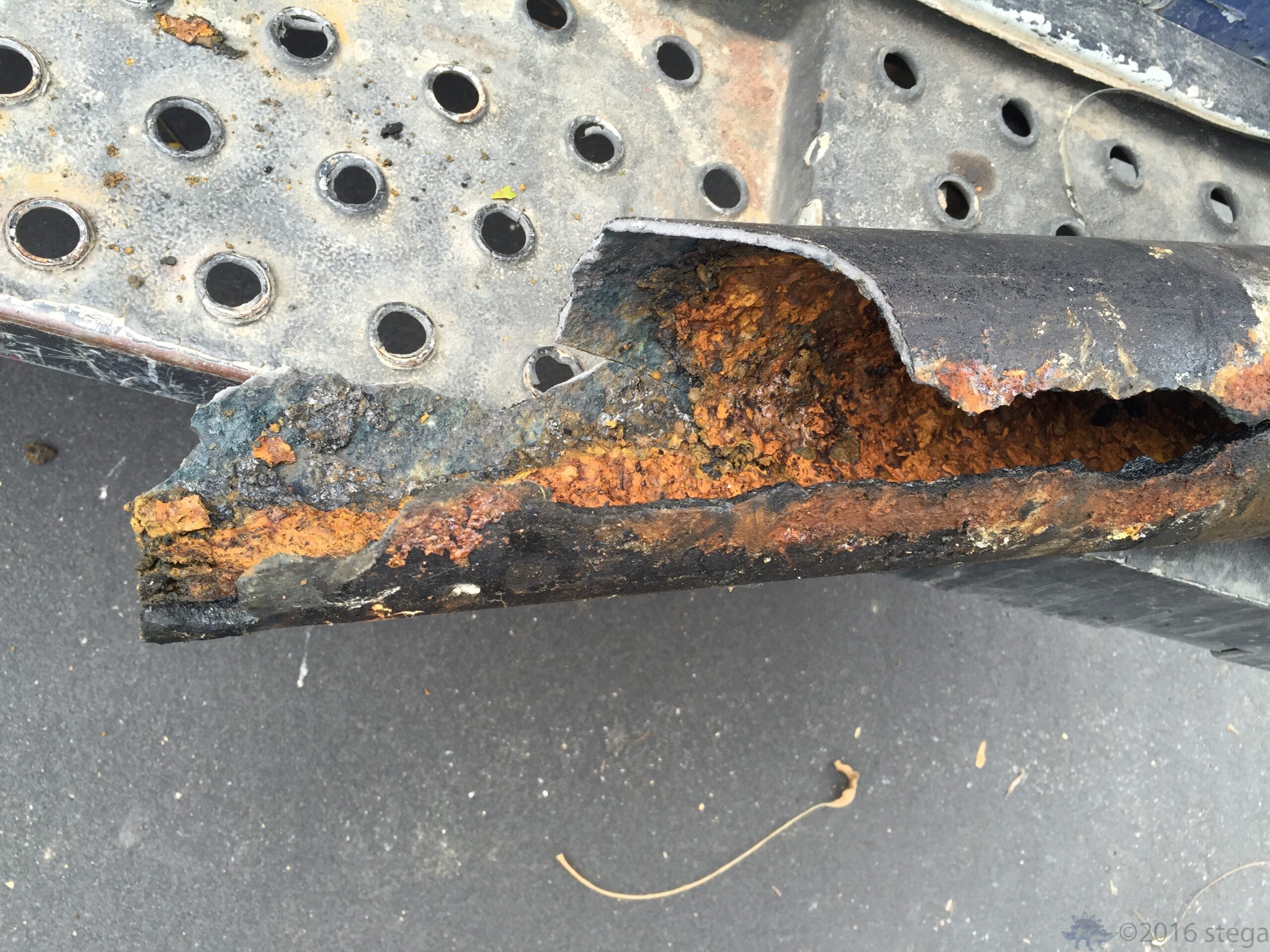 When we first took possession of the property we had the drain pipes in the south/west wing replaced.  We now know we really should have had the entire main sewer line done at the same time as a few months back, when we first started working on getting a handle on
things under the house we discovered that a leak where the new sewer pipe section joins up with the old line.

Since things were under “warranty” I called the outfit we had handle things (Rescue Rooter) and they said they would send someone out.  Then things got complicated as they had recently sent someone out to give us a quote on replacing a broken exterior tap head.  They quoted that project out at over a thousand dollars so we said “uh no thanks” and apparently they were then confused about that quote and the drain issue so it took a few weeks for them to actually come out and look at what was going on with the drain pipe.

Turns out the old section of pipe was cracked from where the new pipe joined it to where it then makes a ninety degree turn to then run through the north wing of the house and eventually out to the septic.  Of course this section wasn’t covered by the warranty as of course it wasn’t cracked as a result of the work they had done last summer.  And of course the guy who came out undid the fitting between the two and only then determined how dire things were and that the now broken pipe couldn’t be put back in place and I was now basically a hostage to them.  Still, did I grumble?  No.  They quoted me a not terrible price, yet still pretty steepand he then proceeded to put a new section of four inch pipe in place.  Of course the guest room and kitchen smelled awful for the rest of the day.

That wasn’t the only troublesome bit of plumbing to deal with lately.  A few weeks back I was sitting at my office desk working when I heard a very loud noise.  Now this was just after getting the furnace stuff sorted, so my immediate thought was that something bad had just happened until I remembered we have diesel, and diesel does not tend to go boom.  Outside I went towards the side gate, and low and behold water was gushing out of the pool equipment.

Here’s a shot of the equipment.  You will note directly below the electrical box there is a black section of pipe and you can just make out a small relief tap on the left side.  Well that tap had blown out of the pipe and hit the fence across the way, thus making the loud noise.  I quickly opened up the electrical panel and threw the breakers.  I then made a call to Genie (our helpful pool people) and they sent out a tech to try to sort out what was going on with things.

When the tech arrived he diagnosed a pressure build up and thought he might not have enough water in the pool which wasn’t the case, so he redid that section of the plumbing.  I suggested maybe it was a blockage somewhere in the plumbing but he didn’t think that would cause the issue.

Well..things were ok for the next week and then one day, everything exploded again, only this time since the new tap had been mounted at an upward facing angle we had our own little Old Faithful going off.  That meant to be safe and not be standing in water when dealing with shutting things down, I went into the building behind the equipment and flipped the main circuit from electrical panel for that area of the house.  Then I made another call to Genie and they sent the tech back out.

He still thought the issue was with our pool or possibly our pump so this time he redid the plumbing and left off the tap.  Since in both explosive cases I had noticed a tiny amount of water leaking from the pump a few hours before the actual explosion, we agreed I’d keep my eye on things.

And wouldn’t you know a few days later there was water leaking out from the base of the pump.  Not one to want things exploding a third time I shut the system down and called the tech back out.

This time he went through the whole system and finally found the issue.  Turns out the solar valve, the ONE portion of the pool hardware we have not replaced in the last year had failed. If you check the above images you’ll see it immediately below the patch of exposed plywood (which is where the electrical panel used to be and is now, as of writing this finally stuccoed and painted, but more on that later.)  Here are some shots of it after it was pulled out of the setup.

We have a very nice new valve in place and things have stopped exploding…for now.