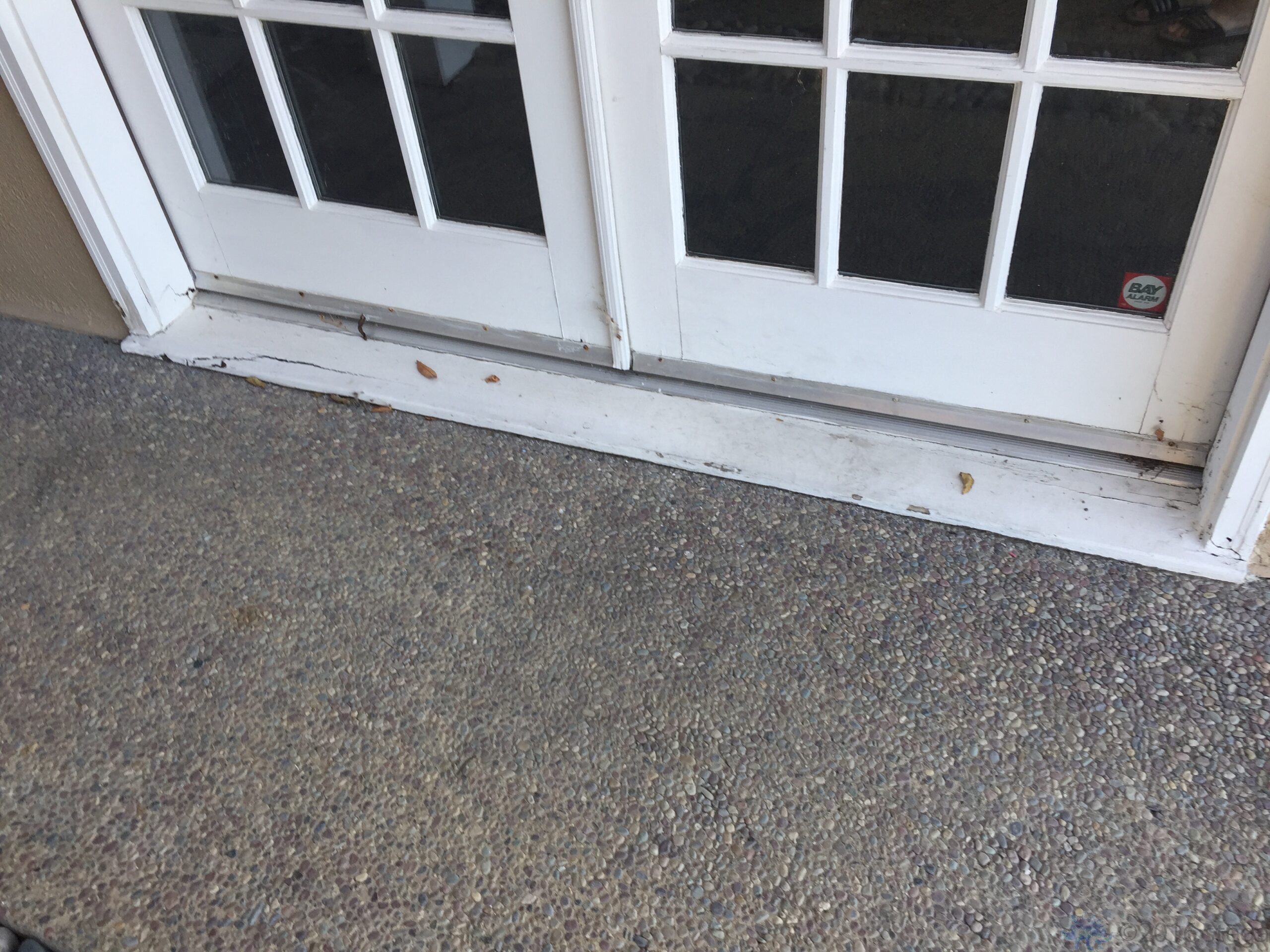 We knew when we bought the house we had dry rot issues to address.  Even through the fresh (but badly done) paint job the POs had slapped up onto the house, you could see where things were starting to fray.  We had enough on our plate immediately after moving in that we didn’t get to address the problems last summer, so this summer it was high on my list of things to sort out.

First there was the task of documenting the current conditions.  Here are some highlights.

First we have the pergola outside the studio building.   The previous owners, not known for their attention to details chose not to pay for a proper paint job when they got the place ready to sell.  As a result the tops of the beams of the pergolas and front arbor were not painted and in addition, the joints were never sealed. There was also the matter of the french doors leading in to the studio building from the breezeway between it and the main house.  You will notice the condition of the bottom of the door frame.  It had begun to rot out because the previous owners, in their infinite wisdom thought that a wooden door frame was a good idea on the exterior of a building.  Why we even have these doors is a mystery of missing logic as you will note in the above image there is a single windowed door (complete with a storm door in fact) not 12 feet away.  Plus four feet to the right of that door…a sliding glass door.  To add to the door insanity…there’s a another sliding glass door just around the corner opening out to the sports court.  That means there are four separate entrances into this building which when the previous owners lived here was used for five things:  their pool table, their video games, storing the incredibly fantastical amount of clothing the wife owned, and finally storing their wine and books.  The mind just boggles at the number of entrances/exits.

But I digress, back to the issue at hand…that being that various bits of this building and the house are slowly rotting away.  Here’s a shot of the arbor section above the pool equipment.  As you can see, lots of rot showing under the quickie paint job. Then there is the massive pergola outside the great room.  Here’s a shot of the front of the house which is really kind of the back of the house…as our house, while it does have a “front door” doesn’t really have the whole yard thing in the front since we don’t really have a yard…we have giant pastures instead. Then as you can see in these detail shots, the rot was pretty extensive. (In the shot below the black marks on the pillar are actually gaffers tape to cover large holes made by the rot. Oh look a beam eaten through by rot. Here’s a close up of the bits we taped over last winter to keep water out as best we could.

And to think most of this damage was totally avoidable.  If the previous owners had kept up with things and actually taken the time to inspect areas of the house regularly, the rot would never have gotten so bad.  They were apparently totally unwilling to spend money on their home but perfectly happy to spend money on clothing and jewelry of questionable taste.  Different people have different needs I guess and we really shouldn’t be too mean as they migrated to Wisconsin this fall.  That’s right–proving themselves the epitome of the term “helicopter parents” they followed their only child when she went off to college. Thankfully we found the house and bought it and can now take care of issues like this to the right.  This is the south east corner of the great room.  This bit pokes out about four feet from the main line of the south wing and the slow settling over the last 50 years couple with slipshod care mean a nasty hole of rot.  Thankfully all these issues, while not fixed forever, are being addressed, but more on that in the next post.