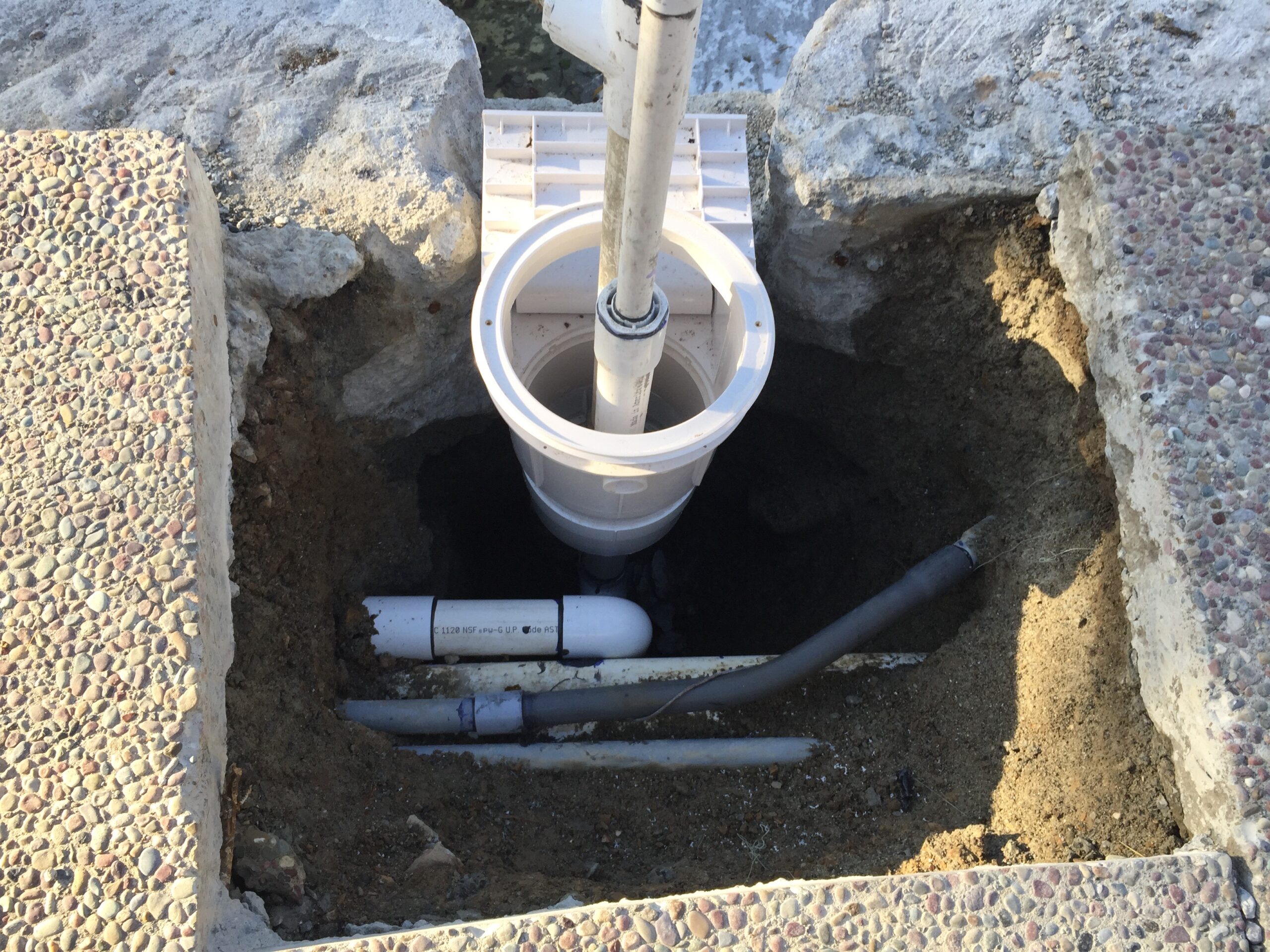 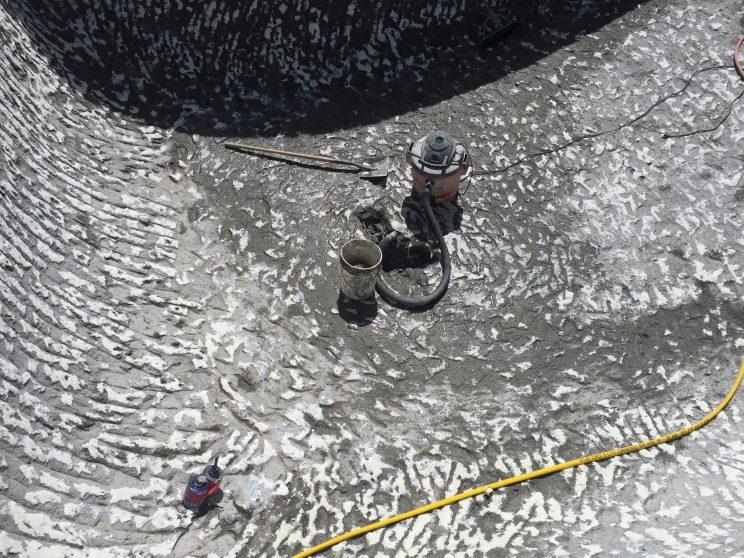 Once the surface was stripped, Adams got to work on the prep work.  To bring the pool up to code we had to have the bottom drain split into two intakes instead of the single intake we currently had.

And this is when we hit the major unforeseen complication.  At some point in the past, the POs or someone they employed had poured something down the pipe between the skimmer and the drain that completely blocked it.  The plumbers from Adams suspected concrete as nothing they could do:  not suction, acid or power flushing would alleviate the issue.

We had two options:  we could open up the pool shell to expose the affected pipe, find the blockage and replace the affected section or possibly all of the pipe; or we could abandon the drain and put in a side skimmer.  The second option while less invasive, would still be to code and would also mean a perfectly smooth finish at the deep end of the pool.  It would mean replacing the skimmer and drilling out a small section of the shell sidewall to install the components, but after doing a lot of research, including panic-calling our regular pool equipment people for their take on the situation (which I’m sure annoyed them greatly since we didn’t chose them for the project,) we decided to go the skimmer route. So a new crew showed up and began excavating for the skimmer. First they removed the old skimmer (and accidentally damaged the pool light conduit and wires which they promptly fixed and thus was something that didn’t even register on my “oh shit” radar.)

Then they very carefully drilled out a portion of the side wall while staying clear of the existing light fixture. It was during this somewhat crazy time that one of the foreman came to check on the job and we did a bit of pool archeology.  We know the POs remodeled the pool in 1999 or thereabouts based on the drawings we have and the info provided by Pool Covers Inc who did both the cover install for the POs and the cover replacement for us.

We now know that during that renovation, steps that once led out of the pool towards the sliding glass doors to the kitchen were deleted to make the pool a proper rectangle and thus allow for the cover.

Once the plaster was removed, the fill and resulting scar were clearly visible. This also means that all the concrete surrounding the pool dates back to just 1999–just not the square pavers that form a walkway around the house as those are original.  Since one of the current projects right now is working with a landscape architect to redesign the entire garden area including that which surrounds the pool, and we now have our own excavator, we are now far less attached to the rather ugly concrete currently in place. We also learned that the pool equipment was located elsewhere prior to 1999, although where exactly we have no clue.  The old pipes we found when when we pulled up the deck along the south pool edge last summer were part of the old system and the POs didn’t bother to remove them, they just built a deck atop them.  Not surprising at all as these were the same people who built a deck over their septic tank. During this process we attempted to sort out if we actually have a way to fill the pool that does not involve using a hose.  Sadly the answer to that question is no, as it seems at sometime in the past the POs blocked up that pipe as well.  We did though discover we have a drain pipe from the pool equipment out to the southern slope.  As an added bonus though we also discovered just how totally stupid the previous owners were, but you’ll have to wait a bit for that story.

Once the excavation was complete the pipe crew arrived in their pipe truck.  The truck was awesome:  it had every fitting you could want with various sections of pipes stored in the middle and up top. They built out the new skimmer in just over an hour. The next day a small concrete team arrived to patch things in, and most importantly, REMOVE the diving board base.  This was probably the one item in the project I was most excited about.  When we first moved in, the old diving board went into the very first dumpster we got in and filled.

Here’s a shot of Alf standing a top the dumpster with one foot on the old board.

The base, which was stuck deep into the concrete, was a nuisance.  You had to walk carefully around it else you’d bark your ankle on it and it just looked awful.  We had tried to get a few outside contractors to give us a quote for removing it, but none of them knew how to approach the issue. Thus, the one extra item we stipulated on the contract for the remodel was that Adams would remove it for us since they do that sort of thing often enough.

So the concrete team brought their big saw and got to work.  Here’s a short video of the event.

Then all the remained was to fill the bits in. And best of all, where the diving board base once was: At this point we were ready to install the new coping and surface!