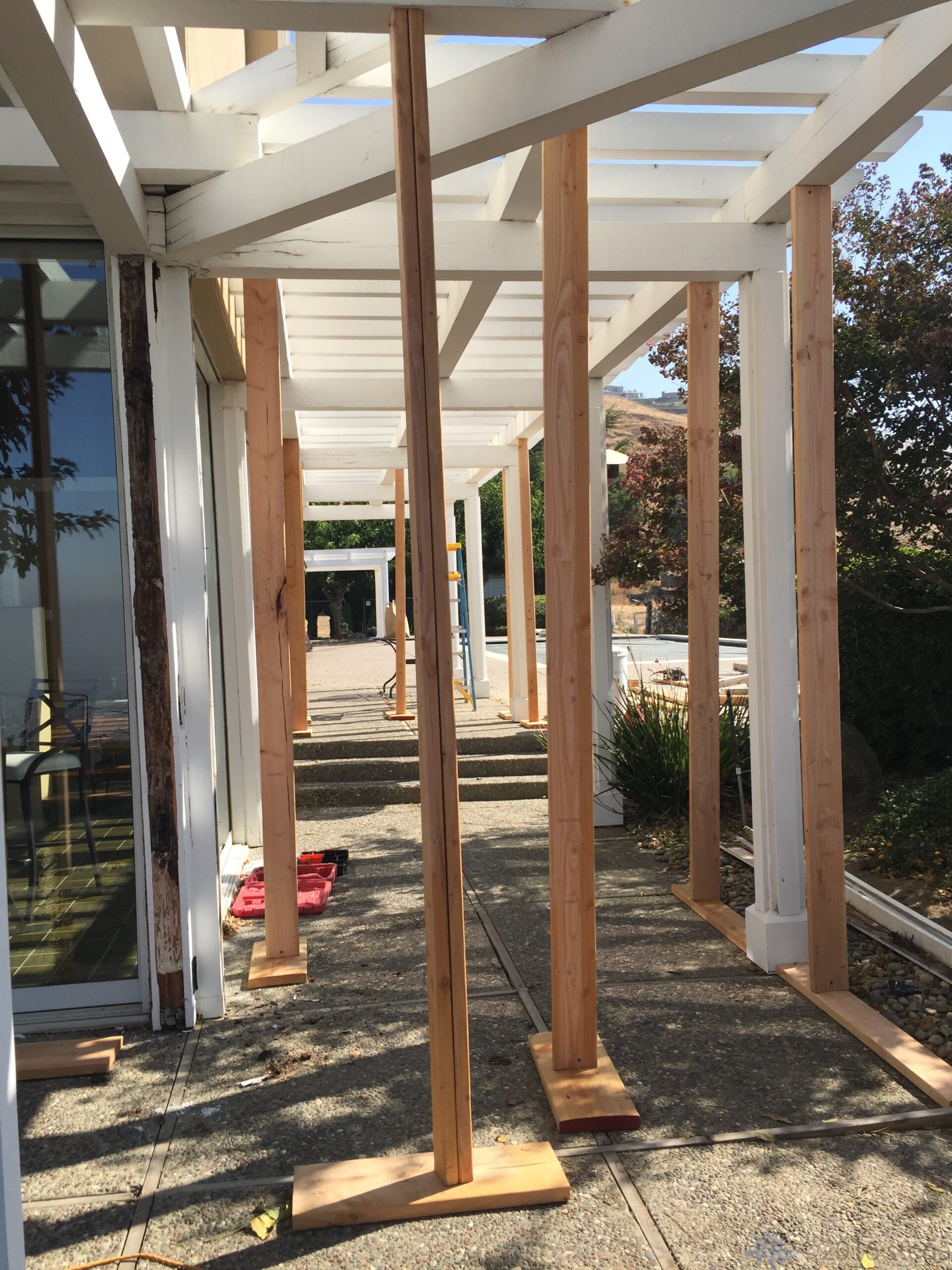 To keep our house from literally rotting away I originally intended to have the awesome contractor who took care of the utility closet door work and rebuilt the great room closet do the work, but he’s much in demand.  Agent Smith had a recommendation from a co-worker for a newer general contractor, so I met with him and went over the details.  He gave us a quote that wasn’t unreasonable and so we signed off on him doing the work.

Keep in mind the work we are having done is not a final solution to the issue, it’s more like a very sturdy ace bandage that will hold things in place and prevent future damage until a point in the future, say in 5 to 8 years, when we decide to rebuild a large portion of the house. With that said, Walter and his team from Mills Custom Homes got to work.  First there was the work to replace beams that were rotted out with sound timber and to in some cases add details that would serve to better protect what is now technically compromised beam work.

The lumber was delivered and the crew got to work.

In some areas, things looked pretty dire.  Here’s a shot of the arbor/pergola in the breezeway between the studio building and the main house.  The rot had gone from the board to eat out a section of the building behind it.  Not a good thing. We feared that it had spread and was festering behind the stucco, but we got lucky and just that section was affected.  We only found that out though by breaking away a portion of the stucco around the area.  Seeing as we already were having the area where the pool controller box used to be re-stuccoed, it wasn’t a big deal to have the guys investigate things further. Then it was just a matter of putting in yet another fresh piece of wood. More dire were the pergola and exterior beams of the great room.  Since the crew was going to be replacing some of the beams they needed to put in temporary supports in various sections. And then as the series below shows, in some cases the dry rot turned out to be pretty bad.  Thankfully it was still something we could deal with without taking apart the entire great room, and considering the size and construction of that part of the house, that’s a very good thing.

This is the worst of what we found:  the south west corner pillar of the great room.  The first two images show the exterior facing. This was removed to expose the beam which is what hold up that corner of the great room.  The beam is 6″x6″ and so the crew removed the rotted section and replaced with a 1″x6″ section and then bonded the two together and sealed them.  Then they replaced the frontal vertical with a new beam. That wasn’t the only supporting beam that had to be sorted out.  The arbor in the front of the house had also was suffering from heavy rot issues.  It was replaced with a new pillar which meant replicating all the facade/detail work even down to the base so that it would match the others. And of course there was the south west great room pillar.  This turned out to be not quite as awful as we thought and the crew put actually completely sealed the pillar by simplifying the detail work so that now there is just a simple flat section of wood work between the window frame and the edge of the pillar.

After all the wood was sorted it was time for painting but of course we then had almost an inch of rain and had to wait for things to dry out a bit.