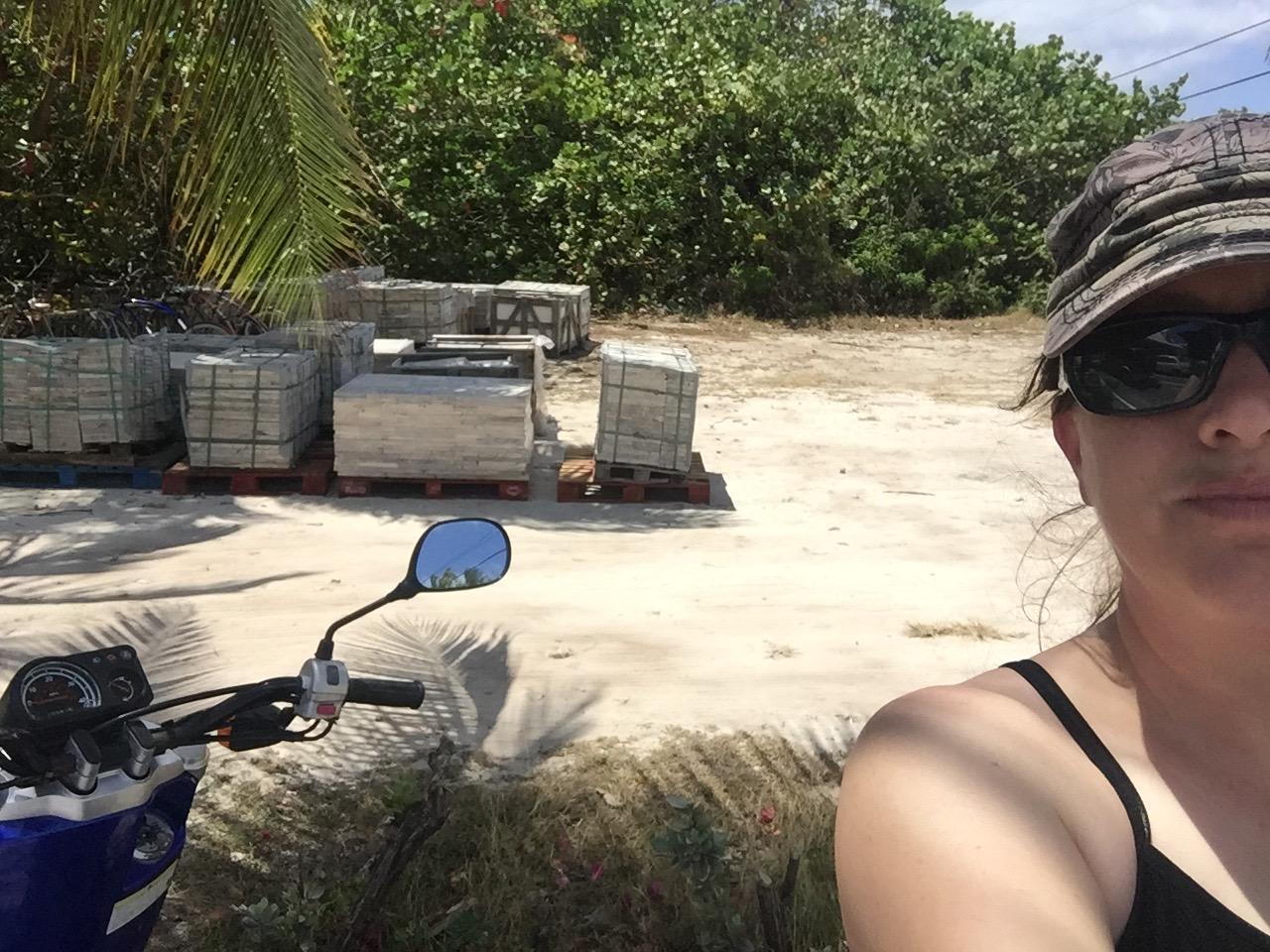 I did take a break my last full day — mainly because you’re not supposed to dive twenty-four hours before a flight. I ended up swimming out to Owen Island which is about a quarter mile from shore. It’s uninhabited and only reachable by boat/kayak/swimmers.

Here’s a shot of it from satellite imagery. For reference, the Little Cayman Beach Resort has the dock in the upper left of the image — right across from the channel.

The last morning (my flight out wasn’t until the next afternoon) on Little Cayman I rented a scooter from Scootens Scooters and rode around the island.

In addition to the diving, Little Cayman is known for the avian and reptilian wildlife. There is a 43 hectare seasonally flooded hypersaline lagoon called the Booby Pond on the west side of the island with a large lookout deck on the second story of the National Trust building plus a bunch of constructed lookouts scattered around the island which allow visitors to stop on their drive or ride along the sole road that circles the island and walk a bit deeper into the island and see some of the other salt ponds.

I stopped at quite a few of the walkways and took panoramas of the views. Here are six of them.

All too soon though my vacation was over and it was time to head back to civilization. My trip home didn’t get off to a great start though as my flight off Little Cayman was delayed which meant I missed my connection off Grand Cayman. I flew Delta which is something I will never ever do again.

You see at that time the airport on Grand Cayman was under renovations, so once I arrived I had to run roughly a half a mile because there was no way to get between where I arrived and the Delta counter. Only Cayman Air flies to Little Cayman, so I had to collect my giant bag (see the earlier post for details about that) and then sprint outside the airport, around all the construction and an open-air restaurant to get over to the departures side of the airport. When I arrived breathless and panting from the exertion, the Delta staff told me that even though there were 20 minutes until my flight was scheduled to take off, they wouldn’t get me on board. While I could understand that decision, they then were completely unwilling to help me find accommodation on Grand Cayman as there were no other Delta flights that day. I did check with the Cayman Airways folks but there only option would involve me sleeping in Miami for the night, but they did suggest I ask one of the police constables outside the main entrance for assistance in finding a place to sleep.

So that’s what I did and they were most helpful. They found me a taxi driver who found me a room that didn’t cost a fortune. Once I got to my room I spent an hour on the phone rebooking my flight with Delta — another reason to never fly with them again.

It wasn’t even six in the evening by this point so I decided to go for a walk as I remembered there is a great dive shop (Divers Supply) in George Town, and my super old Veo 250 dive computer was going to have to be replaced soon. I wandered down the road and spent some time looking at computer options but couldn’t make up my mind, but I did buy a stand-alone pressure gauge as I did at least figure out I was going to go with a computer that would fit like a watch on my arm and thus would need the gauge.

It wasn’t even seven o’clock when I finished up and my flight wasn’t for another 12 hours, so I wandered about the shopping center and into Club Havanna where I met a bunch of British and Irish ex-pats. Three hours and two martinis later I stumbled back to my hotel, showered, set my alarm to “extra loud” and fell asleep.

The next morning I was up very early and managed to make my way home without any further interruptions.