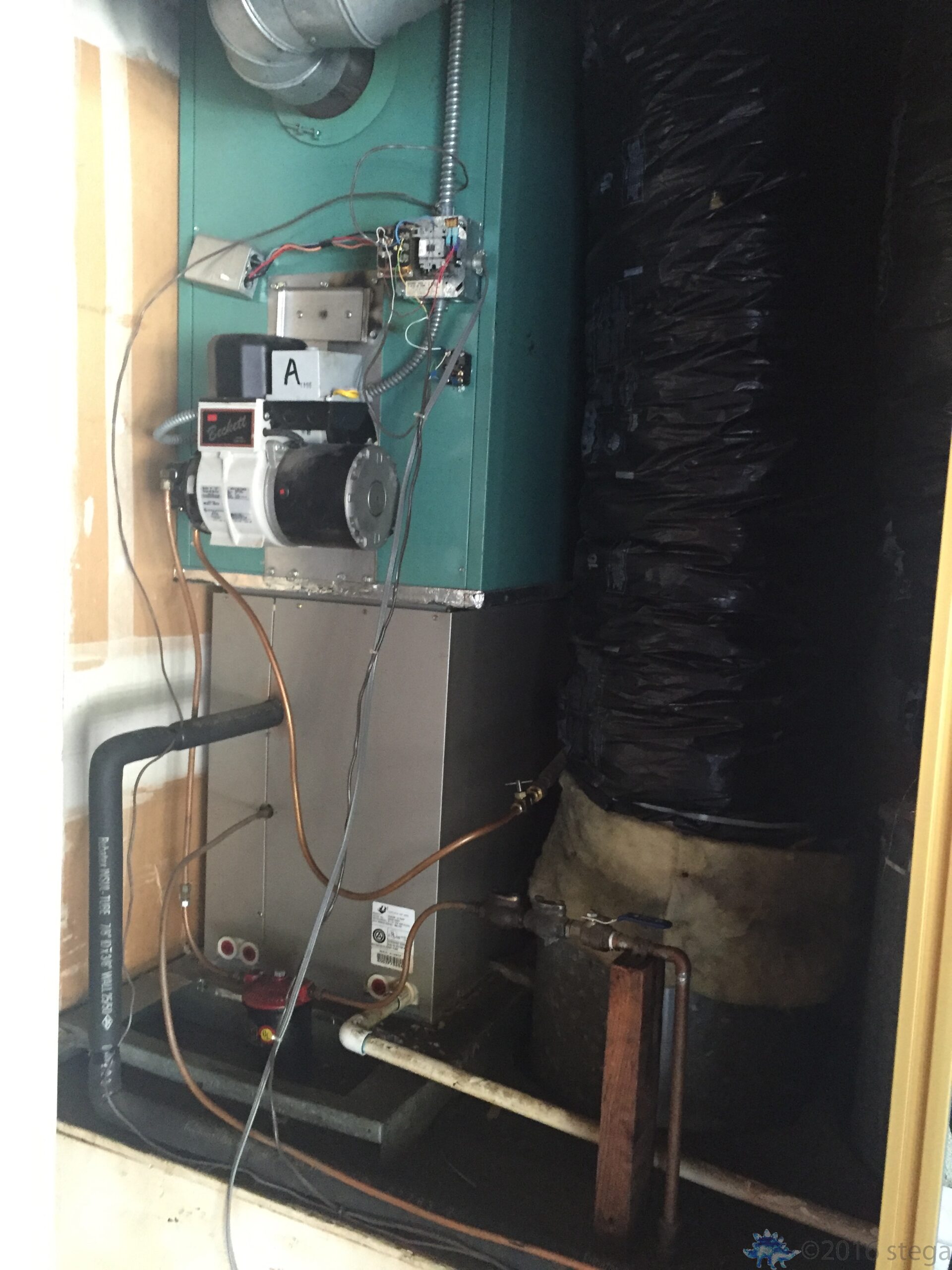 Following on from the last post, the tale of the furnace replacement continues….

Beneath most of the house is a crawlspace with a poured concrete floor. There are three access points to get under the house. One in the guest room closet, one in the coat closet near my office and a third in the closet of the blue room. Amusingly for a while after this project we had 7 holes…sort of. The extra four holes were left when we pulled out the supply and return ducts.

This is what it looked like after we had the kitchen drain pipes redone in the summer of 2015. The long boards provided access for one to slide along on their belly without damaging the large air ducts laying across the foundation floor.

Here’s a shot I took a bit further along. Along with the the duct work there were of course pipes for water as well as a lot of phone and electrical wiring just splayed about all over.

And in these photos below you may notice one very interesting quirk about our crawlspace. Any guesses before I tell you?

Yep, that’s right, a lot of the insulation was installed upside down. In the above photo you can clearly see that the paper side is showing. Now consider this: when this house was built, the construction was a bit unusual. Apparently the joists were put in place and then chicken wire was laid down across the joists to make pockets for the insulation which was then put in and then the floorboards were installed. We know this because when we had the entire crawl space re-insulated (more on that soon) the crew had to cut ALL the chicken wire out by snipping each bit as instead of being stapled in place, it was secured by the floorboards above it.

You can’t make crazy stuff like this up. Apparently the people constructing this place never though anyone would ever want to or need to redo the insulation. Apparently they figured diesel burning furnaces were the way of the future as well, as getting everything out of the hole proved…challenging…even by our standards.

Now getting back to the tale of replacing the furnaces…

After much research Agent Smith and I decided the best option to replace our twin diesels was to not replace them with another forced air option, but instead to abandon the tradition forced air furnace idea and instead go with ductless mini-split heat pumps.

Ductless, mini-split-system heat pumps (mini splits) make good retrofit add-ons to houses with “non-ducted” heating systems, such as hydronic (hot water heat), radiant panels, and space heaters (wood, kerosene, propane). They can also be a good choice for room additions where extending or installing distribution ductwork is not feasible, and very efficient new homes that require only a small space conditioning system. Be sure to choose an ENERGY STAR® compliant unit and hire an installer familiar with the product and its installation.

Like standard air-source heat pumps, mini splits have two main components — an outdoor compressor/condenser and an indoor air-handling unit. A conduit, which houses the power cable, refrigerant tubing, suction tubing, and a condensate drain, links the outdoor and indoor units.

Then I got to start making the calls and finding an outfit that didn’t suck to do the work. I narrowed things down based upon reviews, ability to install the brand we were after and overall first impressions and eventually chose to go with the Ventwerx, who happened to be the same mob that had come out to check over the AC units back in 2015. (I liked the guy who gave everything a once over and had kept his card.)

Basically after a certain point one deals with enough contractors for enough projects that one learns to trust ones instincts about first impressions. In the time we’ve been here we’ve only had a few dodgy experiences, but the majority of people we’ve hired to complete projects have done great, if not excellent work.

Thus it was on the morning of May 18th, 2018, a large crew from Ventwerx arrived to start the demolition.