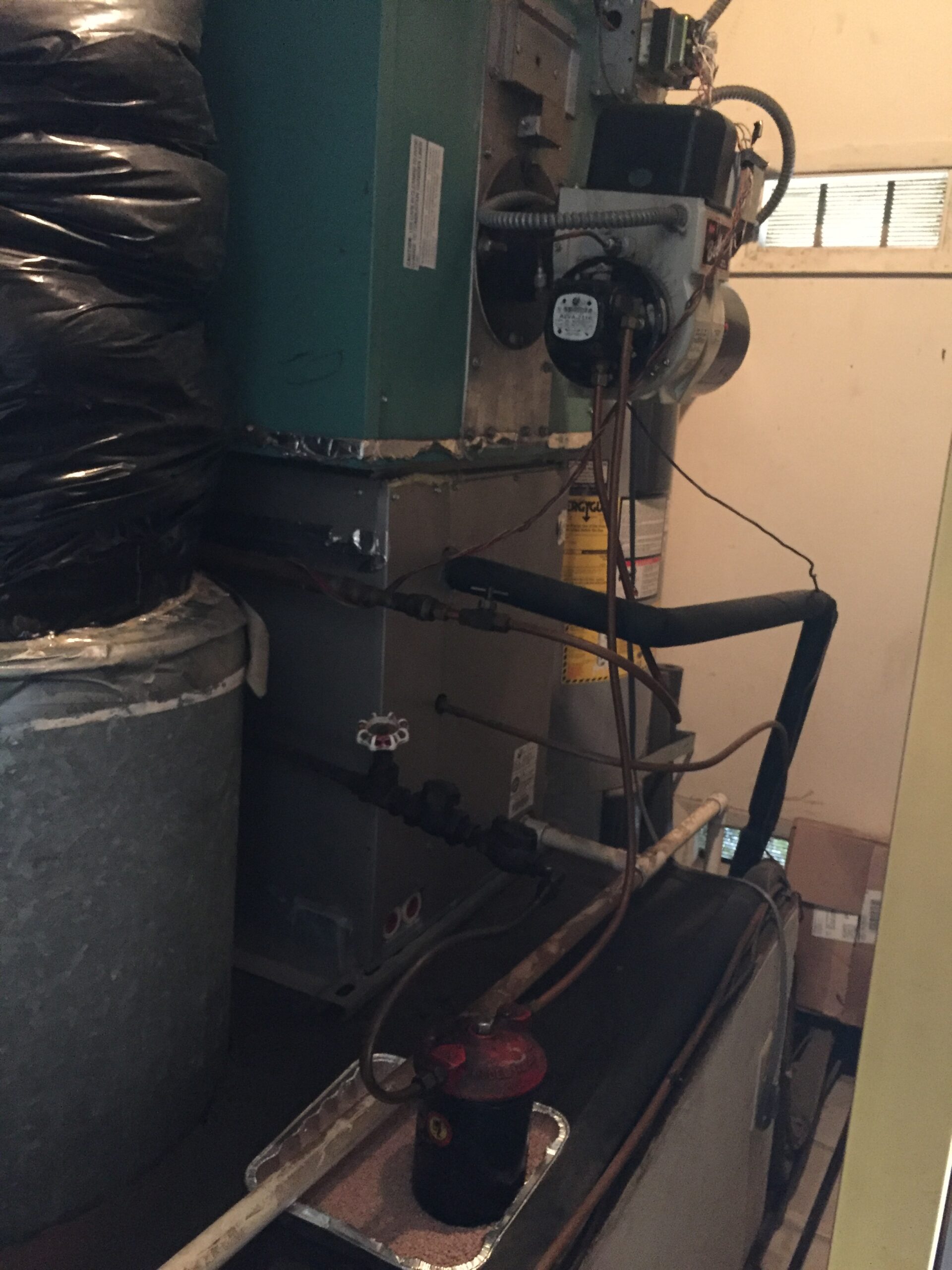 There was a lot of upheaval when we replaced our furnaces as we had a crew here for over a week and furniture had to be moved out of numerous rooms.

Of course the kitchen table and kitchen rugs had to be moved out to provide a clear path between the guest room and the sliding doors that lead outside.

We ended up putting the contents of the guest room in the downstairs of the great room. We hadn’t moved the TV back to the studio yet, so it was actually a bit cramped, but since we normally weren’t using the space, that wasn’t a big deal.

When the crew arrived they got to work trying to minimize the amount of mess they’d be making. First they sealed up all the holes in the floors and walls where we had ducts. Thus we had lots of patches of blue tape on the floors. If I remember correctly the total was 18 floor vent holes were covered. These would remain long after this project finished. On top of the floor vents we had five large wall returns scattered throughout the house plus four small wall ducts. These holes were much easier to close up, but more on all of that later.

The amount of filth and dust that was kicked up was simply incredible. There was no avoiding making a mess and while a lot of it was contained, pulling out 50 year old duct work is definitely not for the faint of heart of any neat freaks. The crew from Ventwerx did their best to minimize the amount of filth they brought up from down below. Drop cloths were used extensively and thankfully the weather was lovely so the crew didn’t have to worry about bringing mud into the house.

While the crew were busy prepping, a delivery truck rolled in with all the stuff they would be installing once done ripping apart the old furnace and duct work. Three large outdoor units plus all the wall units and tubing were dropped off, but they’d have to wait several days as getting the old furnace out turned to be quite an endeavor.

The crew started at the beginning and there was no going back. The old ducts were slowly cut up, crushed and brought out from under the house.

The above shot is only a small portion of what was eventually brought up.

While several guys were under the house working to pull up all the old duct work, another two were busy removing the old burners and condensers from the closet in Agent Smith’s office.

Now originally Agent Smith’s office was the garage of the house. So a big closet with a couple of diesel (heating oil) burning units wasn’t a bad idea. In the mid80s the POs made the garage into living space and removed the old doors of the closet and put in the big mirrored doors. They really seemed to adore their mirrors. Not only does every closet in this house with sliding doors have mirrors on those doors, but when we viewed the house prior to buying it, there were mirror hanging on the walls all over the place. This was just one of the many nutty things about the POs choice of decor. There were also the twelve TVs (one in almost every room!) not to mention their proclivity to cover every surface with framed photographs of themselves or the burglar alarm that would sound even when disarmed if you cracked a window in what was their daughter’s room. Take a look at the original listing images to see what I mean.

But I digress, the crew were pretty busy for three days pulling out the remains of the old system. Turns out the house had basically been designed and built to accommodate the original setup. It took a lot of work but the guys eventually got the main return and supply duct work out of the gaping holes in the concrete pad.

The pad for the garage and what was originally a mud room (but is now the eating area of the kitchen) was poured around the original ducts. They were encased in concrete and prying them out was a tad difficult. The above image shows the first stage of work as the burners, blowers and condensers were removed leaving just the diesel supply lines.

Below is a shot of what things looked like originally. Sometime in the mid90s the POs had AC installed and to do so, instead of puling out or modifying the the giant box the blowers sat atop, they had the condensers jammed in beneath the blowers leaving no space for any sort of filtration. Thus back in 2016 we replaced the return vents in the house with custom ones that would accommodate filters and that kept the air marginally clean for two years.

As you can see it all sat atop a wooden framed box that was hollow inside and connected to the duct work at floor level.

After much pulling and prying the guys managed to empty the closet. Here’s a shot of just about everything that was jammed in there (minus the plywood box.)

We had yet another dumpster from Ecobox delivered for this project and it was out behind the sports court waiting for all the debris.

We ended up filling the dumpster about halfway with all the old furnace bits.

Once the old was out, it was time to put the new in.