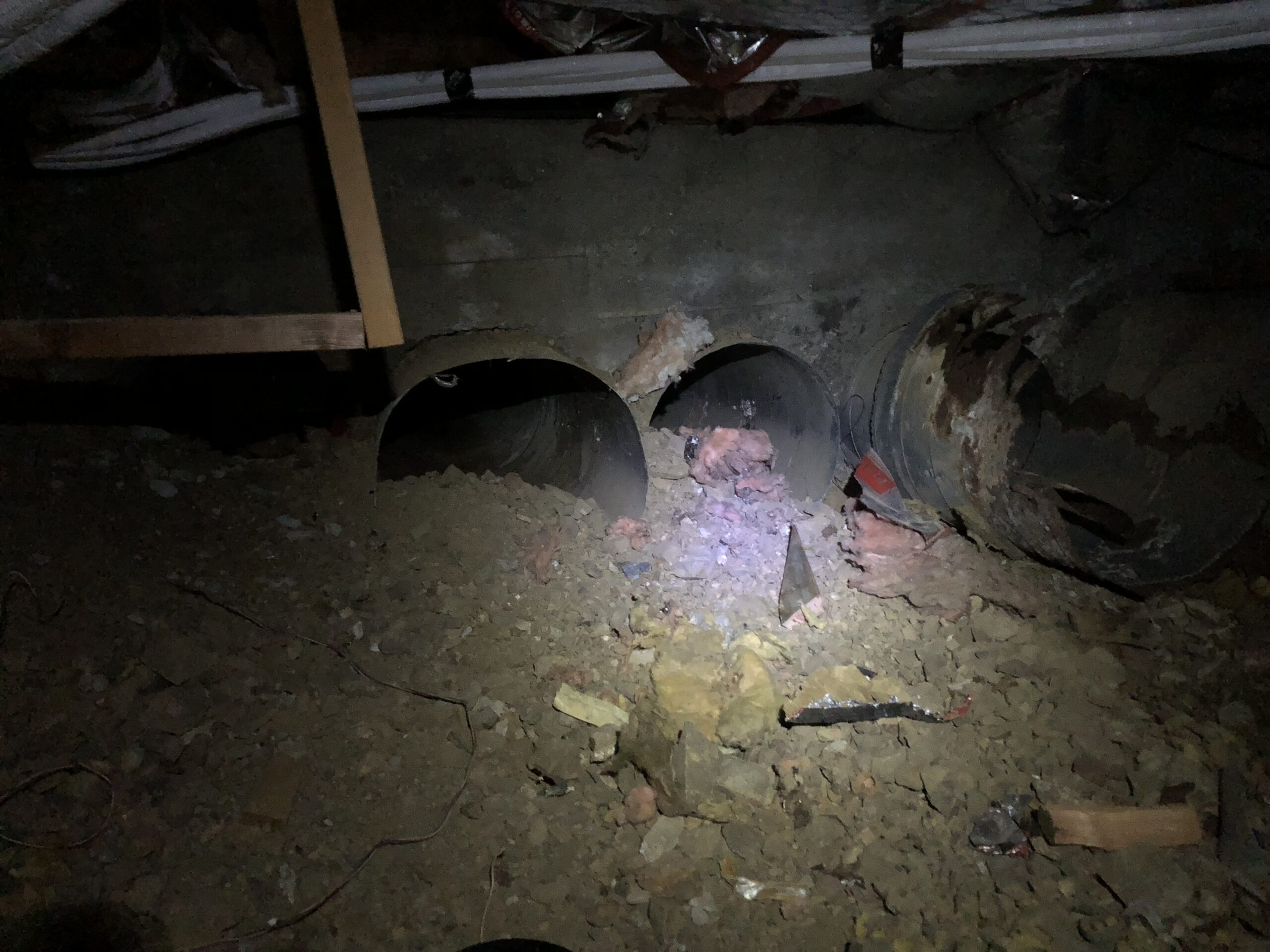 Once everything was out from under the house we were left with a few relics.

Where the return and supplies enter the crawl space it looks like a bit like the game Portals.

All that rubble is just that…general rubble that was probably left over after the house was originally constructed in 1967.

Here’s a shot of where those ducts came up to terminate into a wooden frame box with extension ducts that the furnaces and compressors then sat atop. (See the last post about that craziness.). If we wanted to get a couple of wombats and offer them the use of the old duct work as dens we could have a use for them, but considering how destructive a full grown wombat can be, leaving the metal ducts in place, as they’re encased in concrete, was the best option.

It was also pretty much impossible to pull out the vertical assemblies for the wall return vents, so they still exist in the crawl space and walls. More portals!

One thing we did not expect to find, and it was only thanks to one of the Ventwerx crew who alerted us to the issue, was this.

Yep that is a sewer pipe. The one leading from the master bathroom shower and toilet to be exact. And yep that’s a huge chunk along the top that has rusted out.

Granted the pipe in the image is original to the construction of the house and made of metal, but one big thing to point out is that when the previous owners wanted to sell this place, they went to Lowe’s and put down a chunk of money to have all four bathrooms and the kitchen remodeled. I’m pretty certain this would have been noticed by the installing contractors as it’s just a few feet away from the drain for the toilet. If the contractors were a reputable outfit they would have certainly brought it to the attention of the previous owners, and if the contractors did bring it to their attention, just like so many other things here that the POs didn’t actually have to look at, they chose to do nothing.

Granted, the guy who did the house inspection when we were in escrow did fail to notice the problem, but we can cut him some slack since he wasn’t spending several hours of time under the house in that particular location and there was a large duct blocking direct viewing of the issue- a duct though was most certainly shifted out of the way to permit access to put in the new plumbing for the shower.

We would have to wait to finish the furnace project before tackling the drain issue though, and there was one more gotcha waiting for us…