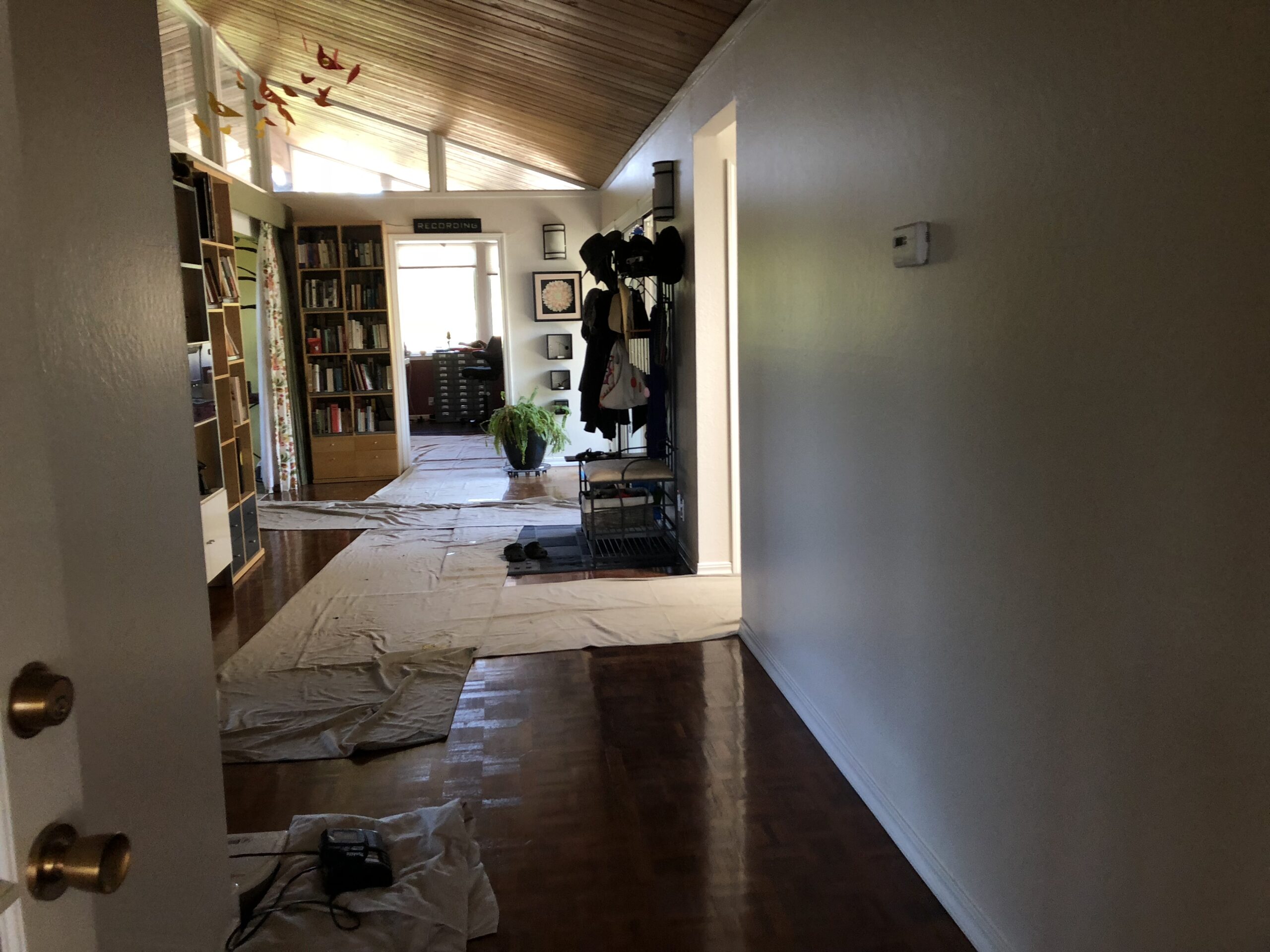 While the crew under the house continued to remove the old duct work, a couple of others Ventwerx guys got to work opening up the walls in various rooms. The new setup meant inverter fan units that reside outside the house and then connect via a couple of very small ducts to the units for individual rooms. The ducts run through the crawlspace beneath the house and then up through the walls. Each room unit then also has a drain (as they not only function as heaters but also air conditioners) which either tie into the sewer line or drain to the outside.

Needless to say we ended up with holes in almost every room.

The master bedroom started off with a rather small hole. Turns out there was too much stuff in the wall and they couldn’t get the ducting up and in place, so they had to make an even bigger opening.

The blue room was a much easier prospect as instead of overhead unit we went with a floor mount just below the windows. So only a hole for the ducts was made and that is hidden behind the unit itself.

The boys’ space was pretty straightforward, and since we were smart and wanted a unit installed in my office, we could use the same access hole for both: meaning no holes in my office, which is great considering how many holes had to be patched up when it was painted just a few months prior to this project.

In addition to those four rooms on the north side of the house, we also had wall units installed in the guest room, kitchen and Agent Smith’s office.

The original spot we wanted the guest room unit installed wouldn’t work, as that location is where the return vent for the old forced air furnace was located. You can see it in the image below. Getting all that metal out of the wall would have been extremely difficult, so we went with the less invasive approach and had the unit installed on another wall.

The unit for the kitchen required no holes as the crew was able to run the duct work through the pantry and then into the closet where the original furnaces, until just a few days earlier, had resided for over fifty years.

The same space was used to run the ducts for the unit we put in Agent Smith’s office which was originally the garage of the house and where the closet for the old furnaces resided. This space has no crawl space beneath the cement pad and can get pretty chilly. Prior to this project Agent Smith was also the one that got to listen to the rumbling diesel beasts every time they started up to warm the rest of the house. There were no heating ducts run to that space, but the heat bleeding off from one or both of the furnaces when they were running was actually enough to keep most of the chill at bay in — if you didn’t mind the smell of diesel. Our first winter here every time one or both of the furnaces rumbled to life the giant mirrored sliding closet doors would bang about. We dealt with that and minimized some of the diesel smell by putting felt tape along the inside edges of the front-most door.

Still once the installation work started, the crew moved along swiftly….