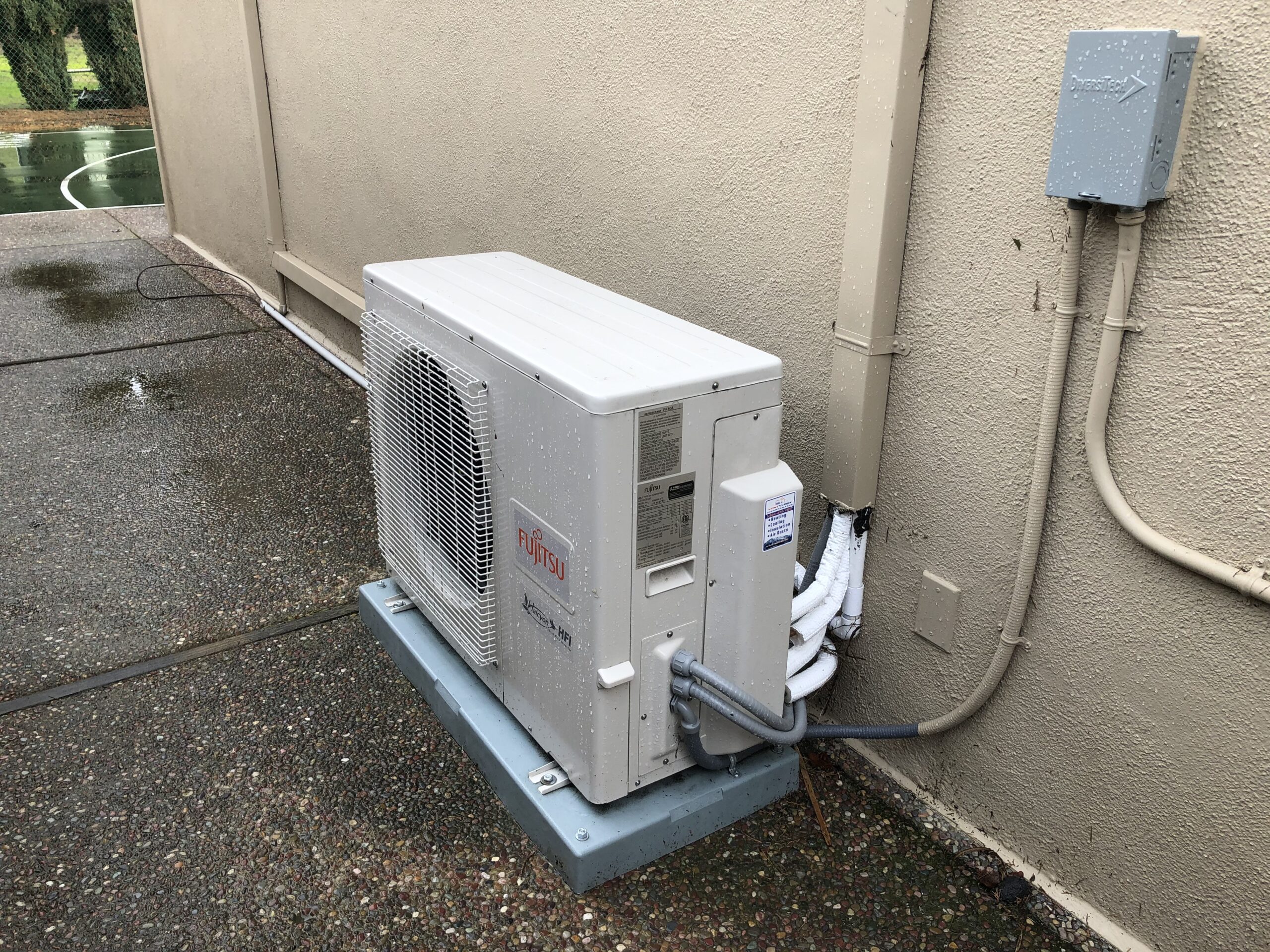 With this project, in addition to the uncovered drain pipe mentioned in the last post, there were two small gotchas. Originally the Ventwerx guy thought they’d be able to install both inverters/fan units where the compressors for the old air-condition had sat below the windows of the guest room and guest bath.

As they cleared away river rocks and were getting ready to set down the fan units they realized the bases need to sit about two inches higher than the current level. Their initial panic was assuaged though, as it was a very simple matter for Agent Smith to hop in the skid steer and head over to the remaining pile of asphalt spoils from when we had redone the driveway a couple years earlier, and scoop up a couple loads and bring them over to the install spot. The guys then tapped the stuff down, and made a nice little pad for one of the units.

Only one of the units actually ended up getting installed at that location, as the second gotcha was that the initial estimates were off and due to distance concerns, it was better to install the second unit closer to my office. Not a terrible thing, and this time it was me who hopped in the skid steer to gather up some spoils to make a nice pad for that unit.

After making the decision to replace the old furnaces with mini-splits we had some smaller decisions to make. Would we include the great room in the scope of work? There were already two returns for the old furnace in the east and north walls of the room as well as 7 floor vents, and evidently the original intent when the house was built was to heat the space. But this space measures 26′ x 26′ x 24′ which means it’s 16224 cubic feet of pretty much open air. Add to this the fact that it has 8′ and 9′ windows along the bottom of two exterior walls (facing south and west) plus three 10′ windows that start 10′ from the floor on the south facing. And if that isn’t enough, there’s a spare window on the east wall and the foyer is technically part of the space since there are no doors between the two (unlike the great room and kitchen)

Here’s what the floorpan looks like to make a bit of sense out all of what you just read.

And for fun here’s a bizarre panorama of the space taken when I was laying on the floor staring up at the ceiling.

So you get it, we have a giant space smack in the middle of the house. We could have put an inverter on the roof (there is power up there already) and run duct work down to a couple of wall units (or three) and then use up A LOT of kilowatts to make the space cozy. But heat rises and with all that glass the space actually stays a pretty constant cool, but not cold temperature in the winter. “Why don’t you just burn a fire in the fireplace?” some readers are probably wondering. Well, keep in mind that the fireplace is three-sided and there is space for three or four people to stand (or crouch) comfortably in the bottom. The chimney stack is then roughly thirty feet tall, so we’d have to burn real wood and A LOT of it if we wanted fire. The possibility of filling the entire space with ash and making the entire house smokey is not high on our list of things we’d like to witness.

Here’s a shot of the top of the chimney column. You’ll notice that thankfully there’s a screen around the opening and we haven’t had to worry about any birds or small critters tumbling down and dying in the fireplace.

Anyway, in the end we decided not to heat the great room. Two years on and no regrets.

Now the second decision we had to make was much easier. We’d been considering options to heat the studio building since the great flood. Originally we thought we’d put in a pellet stove but we weren’t keen on cutting holes in the walls or ceiling. After looking at the pricing for adding a third inverter and a couple of wall units, it made great sense to just get it done.

Since the studio sits on a solid concrete pad, we were able to just plop the inverter in place.

Then we had one wall unit installed in the main room and another in the upstairs area.

We’re quite pleased with the setup as in the winter months we can watch movies, play video games or workout without having to freeze or huddle under multiple afghans and blankets.

Now there’s just one more bit of this tale to relate…..