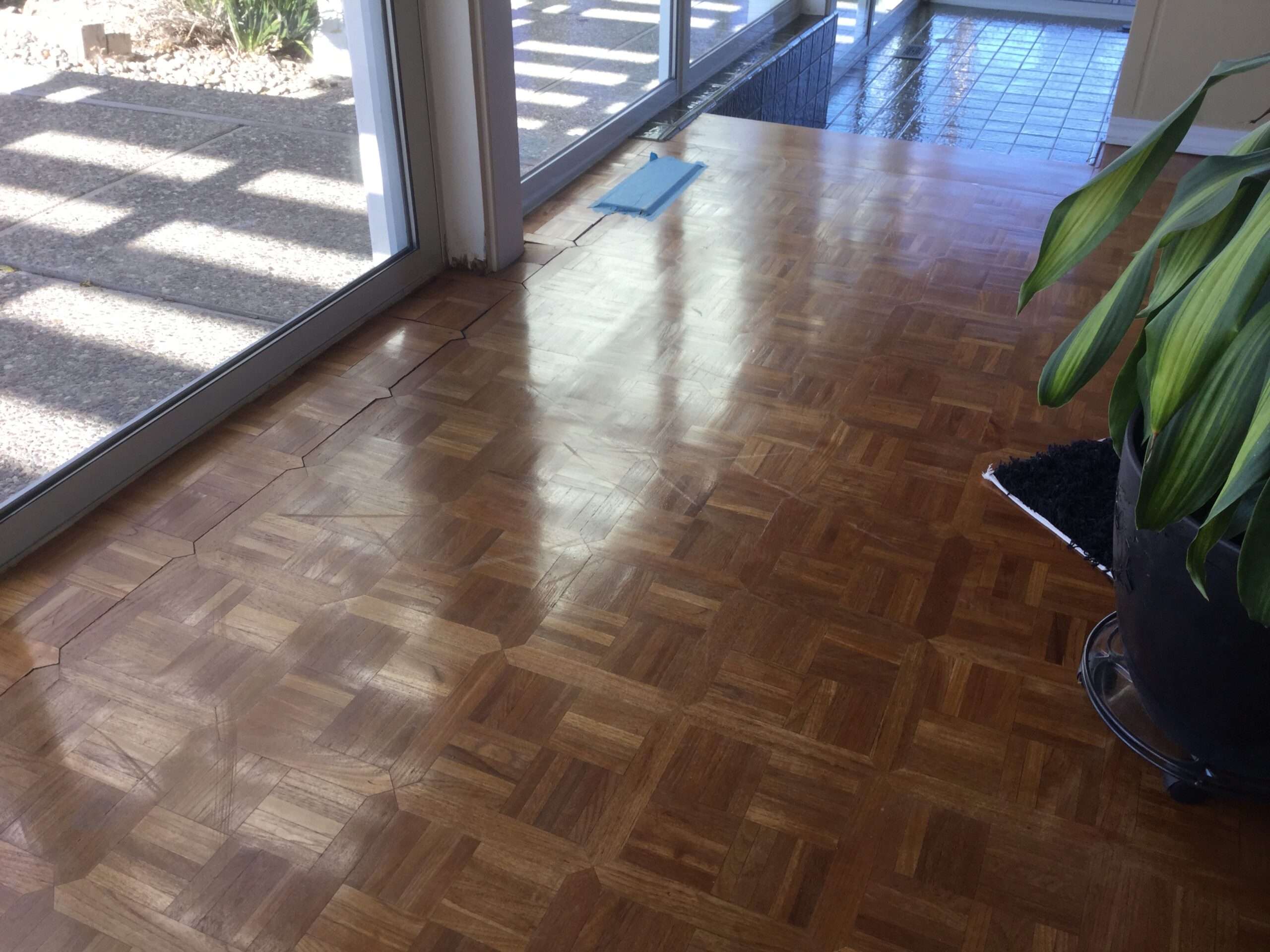 The house here, which was built in the late 60s has teak parquet flooring throughout the main living areas which include the north hallway, foyer and great room. We know from some old photos we found on Zillow of when the POs first tried to sell the house that the teak was also in the kitchen, but the POs ripped it out when they remodeled the kitchen in a rather questionable style.

When we first moved in I cleaned all the floors with Bona floor cleaner and used some Rejuvenate polish on them and that helped bring a bit of life into them. After the huge furnace project in the spring of 2018 we knew it was time to fully revamp things.

This was not only due to the tired condition of the floors, but also to the fact that now we had a bunch of huge holes in them. Five holes to be exact. These were all where old furnace registers were located and we actually had about eighteen holes throughout the house but for now we were just going to deal with the ones in the hardwood floors. (We did already take care of the old register in the guest room when I revamped that room.)

Anyway….the guys from Ventwerx and nicely taped up all the register holes so we had lots of blue spots like this one scattered about.

I did the usual thing and started researching online for contractors to handle the floor refinishing. I found a few promising options and a lot of unpromising ones. In the end, based on other reviews, I called up Scott Leslie of Leslie Flooring. He came out and looked at what I needed done and for the first time ever here at Purgatory, I went no further down the contractor calling/bidding path.

Now this was back in late spring of 2018, but after meeting with Scott, who can only be best described as a floor geek (which is a wonderful thing,) I knew I didn’t want anyone else touching my floors.

The only gotcha with this project was that the floors weren’t just going to need refinishing, they were going to need a lot of patching, and it wasn’t just the teak either. The bamboo flooring we had installed in the blue room and north office right after moving in also had holes: four in total. Of course there was a HUGE gotcha there as Lumber Liquidators had discontinued that particular type of flooring and of course I had returned the handful of boxes of unused materials oh so proudly to LL two and a half years earlier. Thus getting all the holes repaired was going to be….interesting.

Needless to say, it took a few months for this project to finally get started.