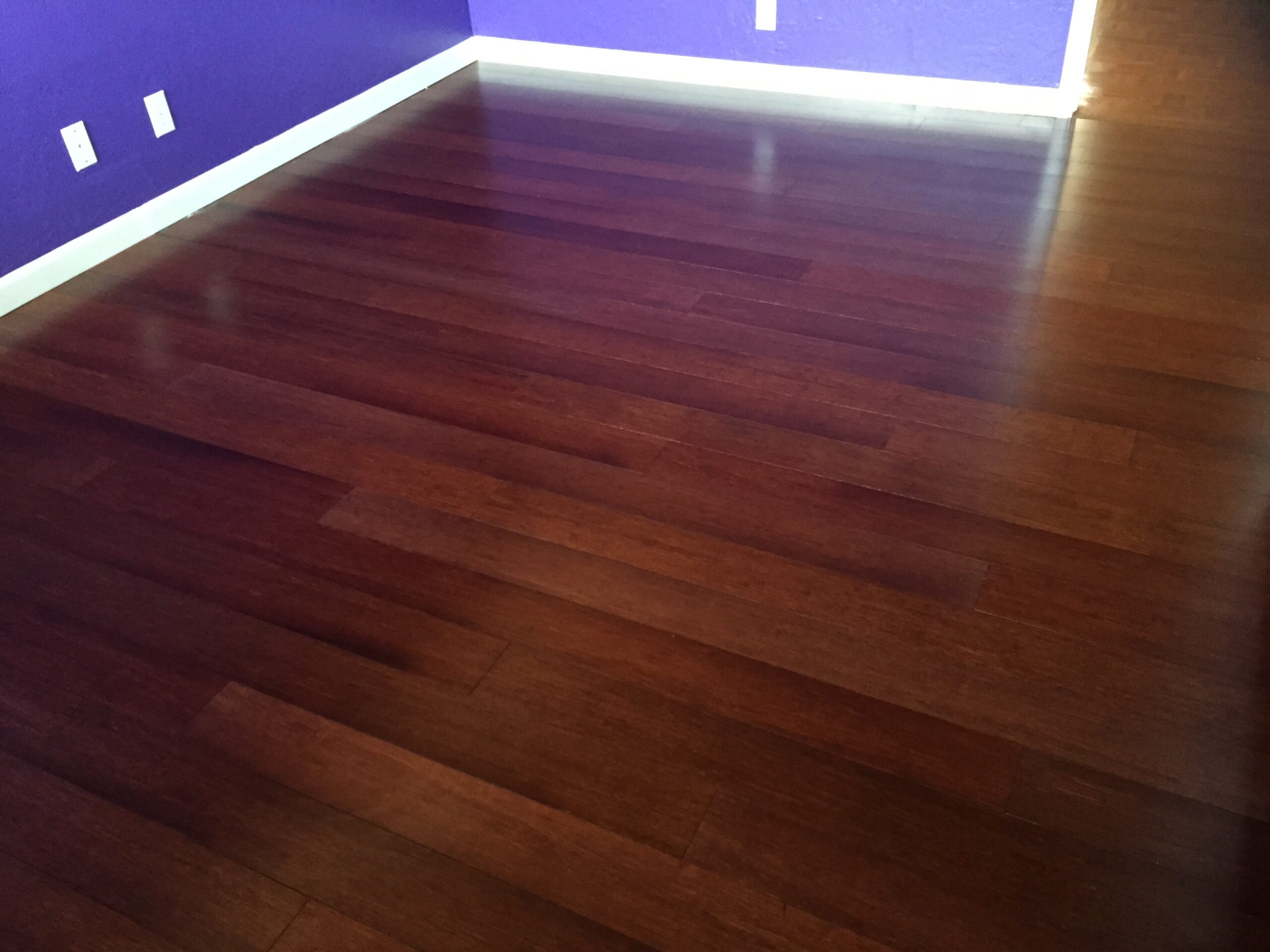 When we bought the house at Purgatory the carpets in the north office (now my office) and the PO’s daughter’s bedroom (the purple room) were in awful condition.  Even after having a service come in to clean them, long lines of embedded dirt were still present.

You can see the long stripe of filth in this image of the north office:

Thus I started looking at hardwood flooring.  I wanted something interesting but not too expensive. I started at a place in SJ called Grand Flooring, as their Yelp reviews sounded promising.  I went on an off day apparently and the lone sales guy was absolutely no help.  I did find a couple of ideas like this solid/engineered bamboo option.

And then there was the much cheaper veneer option.

But since the sales guy was no help, I ended up at Lumber Liquidators.  Agent Smith went with me for the first visit and found a few options we really liked.  Here was the reddish bamboo and a solid teak behind it.

In the end I went with a bamboo a shade less red.  I placed my initial order based on what I thought were the measurements of the space and they prepared the order.  Meanwhile I called their installer (a guy named Richard Smith) to schedule a visit so he could finalize the order.

He came out a few days later and measured only to find we didn’t need as much material as I had thought, plus we discussed moldings and the vents.  Originally Agent Smith and I thought it would be nice to have the vents that are made from the same wood and sit flush on the floor, so we wanted this added in to the order.  Of course that bit got all mixed up, but not as badly as what happened to the actually floor install….

I had no idea what a battle was in store, as the installer went off saying he’d call Lumber Liquidators and have the order adjusted, and, once it arrived, he’d be able to have it installed after it chilled out for a week getting used to the space.  So, the wood arrived, and I foolishly assumed it was the correct amount.  A week and a half later (the Friday after we moved in permanently to be exact) two installers with limited English skills arrived and proceeded to put things together.

Here are pics after the first day of work: the purple room was pretty much done and my office was moving along nicely.

Turns out Lumber Liquidators had sent the original amount of flooring, not the adjusted amount.  They also failed to send vents, T-molding and the molding to go between the floor and baseboards. (I chose to not have the baseboards replaced as when we have the rooms repainted, I may want to have them painted something other than white.)   I thought, well, mistakes happen, and since all that extra lumber/flooring was sitting in the space where Tenar and Thy’s cages were slated to go, and they had been residing patiently in the rather dark guest room since Tuesday night, I loaded all seven unopened boxes of boards into the back of the truck and drove them up to the Burlingame store from which we had ordered them.  (No need for a workout that day.)

The return went smoothly and a bit later I called to get the moldings ordered.  I paid quite a bit extra to get them in 3-5 days, and they did arrive promptly.  I then made an appoint with Richard Smith to have him come out and get things put together.  Of course he showed up Wednesday when I was escaping from the electricians (more on that project later) and I missed him.  And of course, when I did return home, I found out that Lumber Liquidators again got the order wrong.  They sent me the wrong moldings (they don’t match the flooring.)  Richard did take away the giant pile of debris his workers had left in front of the house though, so that was a pleasant surprise, but now I’m stuck — going in to week three of not being able to finish unpacking boxes and getting my office in order.