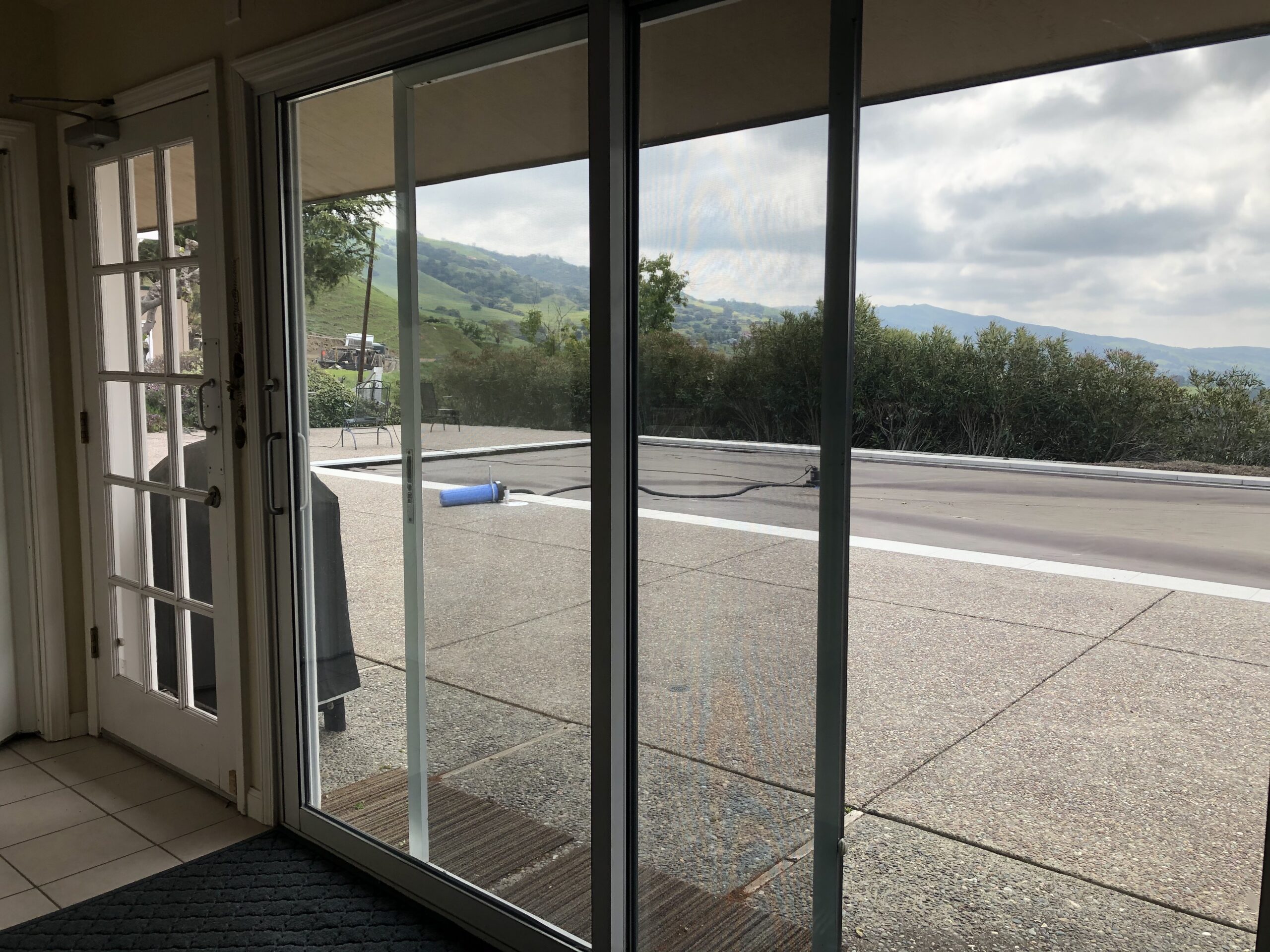 A somewhat odd fact about the living space here at Purgatory is that we have many exterior doors for both the house and studio building. The house has a total of 8 doors leading outside: 6 of which are sliding glass doors, then we have the front doors and the silly swing door in the kitchen. The studio originally had four doors into/out of the building: 2 sliding, the double French doors on the west side, and then another silly swing door, but when we had the great flood in that building, part of the renovations involved getting rid of the silly swing door.

Here are pics of the studio’s doors.

And here are some pics of the house’s doors.

So while the north hallway and master bedroom have simple singe-sliding door setups, the north office is actually a double sliding door, as the glass spans what was originally the house’s garage door opening. The total width of which if you open both doors is eight feet — which is half of the total expanse of glass.

Another oddity is in the kitchen which not only has a large sliding glass door but also a silly swing door. The POs were super proud of this feature. They explained at length when we were viewing the place how they added it and how it made life so much easier. We found it to be the opposite. Sure in warm weather just being able to push a door inward to enter from the outside was convenient, but the door was prone to being pushed open by the wind if it wasn’t locked, and even if locked, during colder weather the draft coming through was significant.

Im the end, we found that the easiest fix for now was simply to seal the thing up.

Maybe sometime in the future we’ll remove the door completely and just have a window in the space, but for now sealing it up s a great solution to an annoying issue.

Lastly there are two large sliding doors in the great room. One of which is a whopping 9 feet tall.

And now for the reason I thought to write this post….as I’m sure readers find this random explanation of our doorways interesting and all, but it really is just a long-winded lead up to the really interesting bit of home improvement. (Although sealing up the swing door in the kitchen is rather note worthy.)

During the furnace replacement project, one of the guide rails for the sliding door in the master bedroom got damaged by one of the workers. Nothing awful, but it made opening or closing the door difficult.

By August of 2018 though it was really starting to annoy us, so I did the usual research and found A1 Ontrack and a couple of tech came out a few days later. In almost no time they had the door apart, a new guide rail plus rollers installed and everything back together. The door can now be opened and closed with just one finger. It’s glorious.

I liked the work the guys from A1 Ontrack did so much, we had them out again to see to the other doors. Soon enough the double sliding door in the south office and the door in the kitchen had new rollers and were equally easy to open and close, plus they made some minor adjustments to the doors in the great room. (We’ll have the door in the north hallway serviced once the shelter and stay order is lifted.)

The interesting bit of info from all of these doors getting adjusted and serviced is that we learned that the doors, which are all Arcadia brand, are actually the sort of doors normally installed in commercial environments. Why they POs decided to go with such an option we will never know, but it fits the pattern: when they had extra money and did some sort of remodeling project they went a little crazy, but then when things tight and they weren’t so flush it was bandaids to hold things together which they then never removed and fixed properly.

Now the good thing about having such doors is they do seal against the elements quite well. They also make the house even quieter, but considering our nearest neighbor is several hundred yards away, it’s not like it really matters.

Perhaps the most interesting tidbit is that the POs didn’t put such nice quality doors in studio building. In there we just have your standard run of the mill inexpensive aluminum doors. Plus when they built that building they didn’t put a metal sill in for the French doors so when we moved in that was of course rotting out and we replaced it with a nice metal one during the first round of dry-rot repairs.

So there you have you have it: a very long-winded story about doors.