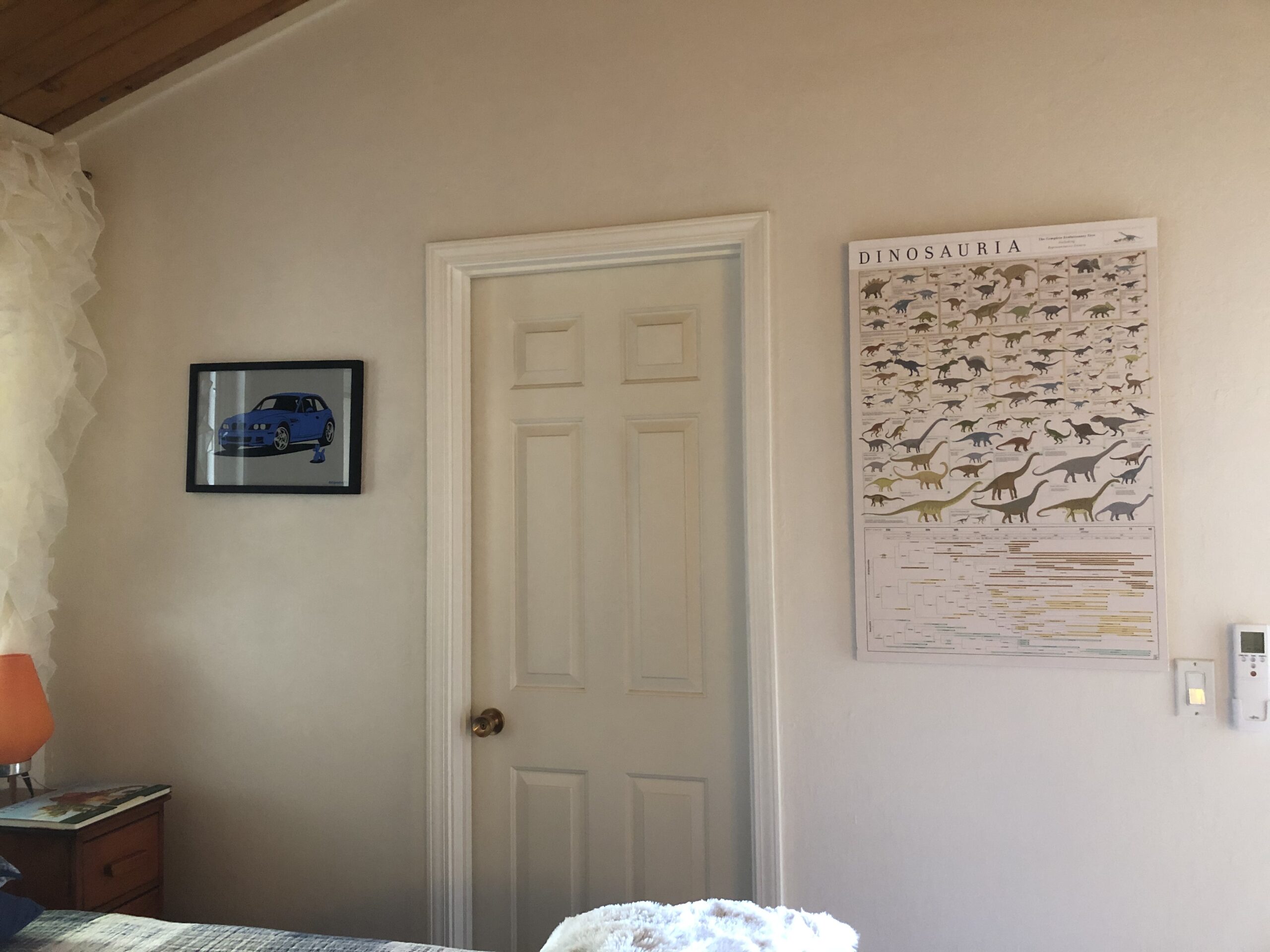 Once the walls were painted and the great tree was finished, it was time to add some finishing touches to the guest room.

First Agent Smith got busy and patched the hole in the floor where the old furnace register once was. A pretty simple fix and we didn’t bother to add a patch of carpet over the area as I decided to rearrange the furniture in the space and the bed would soon be covering that section of carpet.

By happy chance had found a really cute duvet on Amazon. It’s reversible and has a pretty patchwork look on one side and dinosaur’s on the other. How could I not buy it?

The one gotcha with this project is that while painting the tree I accidentally knocked over the floor lamp in the room — breaking two of the five glass shades. I ended up swapping the light for the one that normally resides in the blue room since we were due to have guests occupying the room soon.

I then resused the double curtain rod I originally purchased for the across the alcove of the north hallway that is commonly referred to as the boys’ space. Here’s a shot of the rod when it was installed there. Before we painted the north hallway I reused some curtains we had used on the French doors that opened out to the downstairs backyard of our old place on Potrero Hill.

After painting there space though I ordered a gorgeous set of drapes and valance for the space and squirrels away the big rod.

Here’s a shot of the dining room and master bedroom of our old house in San Francisco and said curtains. Digging up these photos makes me think at some point I should post about our old place, as we lived there for almost 7 years, which for me was the longest I have lived in any spot. Although we’re approaching five years here at Purgatory, so that record may eventually be broken.

But I have digressed wildly. The old curtain rod came in very handy and I ordered two sets of curtains: one basic blue to match the bedding and then a set of very flouncy sheer curtains. I’m quite happy with the end result as the curtains, which replaced some cheap honeycomb blinds that didn’t really fit the window, really soften the space.

Here are some shots of the mostly finished space.

The bedroom set in the guest room originally belonged to my maternal grand parents. When my grandmother passed away I took the dresser, mirror and headboard — which was once a desk but my grandfather crafted it into a headboard. There is a matching desk that my parents have at their house in Ohio, and this summer when we head there for a wedding I will pick it up and bring it back here as the space under the tree could actually make very good use of it. Amusingly enough the lights on the sides of the headboard once belonged to my parental grandparents. Sadly the old long wave radio on the dresser doesn’t work. Some day I may find someone who can repair it or mod it into something useful, but for now it’s just a nostalgic bit of decoration.

A few months after finishing the room I tried to find replacement shades for the ones I had broken and I failed miserably. That’s when Agent Smith got busy with our 3D printer. He crafted some incredibly gorgeous plastic shades that actually work better in the room than the old multicolored ones did.

I hit up Amazon and found some tiny shelves and a mobile of three swallows. The shelves were mounted on the walls where I had painted thick branches and the mobile was hung above the tree. Some small model cars and other car-related items went on the shelves and the end result is absolutely lovely.

A few finishing details still remain: besides the aforementioned desk, I want to replace the blind on the French door into the room and do something with the cover of the electrical breaker box, but the room is vastly improved over its original look and feel.

Here are three shots showing its evolution. First the original wide-angle, professional lit listing photo; then how the room was right after we moved in; and finally how it is today.