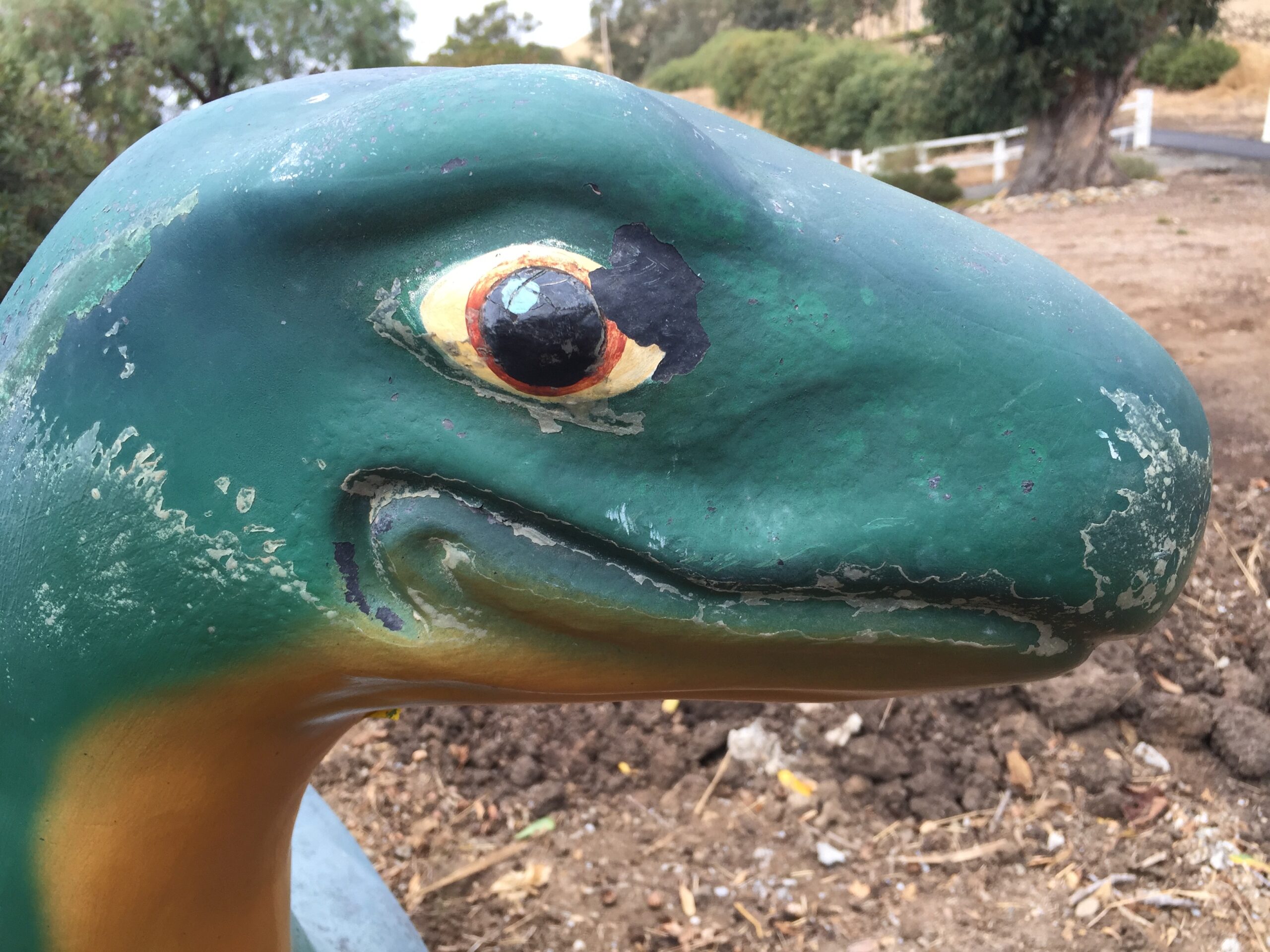 Over the last two years we’ve discussed the idea of finding a few dinosaur statues or sculptures to place here at Purgatory.

Well, to get to the point, yesterday our very first Dino-denizen arrived.

Of course there is a story behind it.

Two months ago I was going through the catalog for an estate sale and came across the listing for a fiberglass Brontosaurus. The description listed it as eight feet long by four feet tall and two feet wide.  That and this image to the left was it.

So I registered to bid, set a calendar reminder and a day before my birthday I settled in to watch the auction online — it being held in Southern California.

In the late morning on October 9th,  lot number 1168 was finally on the auction block.  A few moments later I had won it.

Then of course the matter of logistics reared its head; how does one get an eight foot long dinosaur from Calabasas, California to Purgatory?  The auction house provided me with a list of companies that handle the crating and shipping of the items they sell off, so I called them all and got quotes from three of them that ranged from 1.5K to 4K.  Ouch.

It looked like I would be flying down to L.A. and renting a truck to take possession of the dinosaur until the kind folks at Postal Annex (the fourth shipping company on the list) found a solution that was less than the cost of airfare plus truck rental and gas. Their call last week made my day, as I was coming to terms with the fact that I might soon be sitting on a jury for a criminal trial that was going to last several weeks and trying to sort out what winter projects I’d be able to complete or not complete and what contractor appointments I’d need to reschedule.  Plus there was the matter of getting both Barbie, our Ford F150, and another car in for service. After the initial call I waited patiently for an update and then, to my delight, Wednesday night the delivery guys called to say they’d be arriving the next day.  Promptly at one o’clock they rolled down the driveway and unloaded.

Our first dinosaur living here at Purgatory is residing in the north garden.  After replacing the septic tank two years ago we are finally in the middle of laying out the garden area.  The mounds of dirt will be covered with greenery come spring and the wire netting in the foreground is so we can plant things closer to the house and keep the roots a bit safer from the gophers and ground squirrels.

In addition, we had a half a dozen old bath tubs that were once scattered about to serve as water troughs back when this was a horse property.  I used Giggles to gather them up one by one and deposited them under the ancient fig tree.  They will be re-purposed as planters around the edges of the new garden.  Now that I’m not facing the specter of jury duty for several weeks, we plan on having the area ready for planting in the next week or two — we still need to order in some topsoil and I need to work with our regular gardener to layout the planting plan and drip irrigation. And of course our new friend will be the center piece of the garden.  Pretty spectacular.  And one last bit of info for our new friend, prior to coming to live with us here at Purgatory, it resided in the garden of the late Carrie Fisher.  I do not know if he/she/it had a name when gracing her yard, but I’m tempted to contact the auction house and ask if they know….