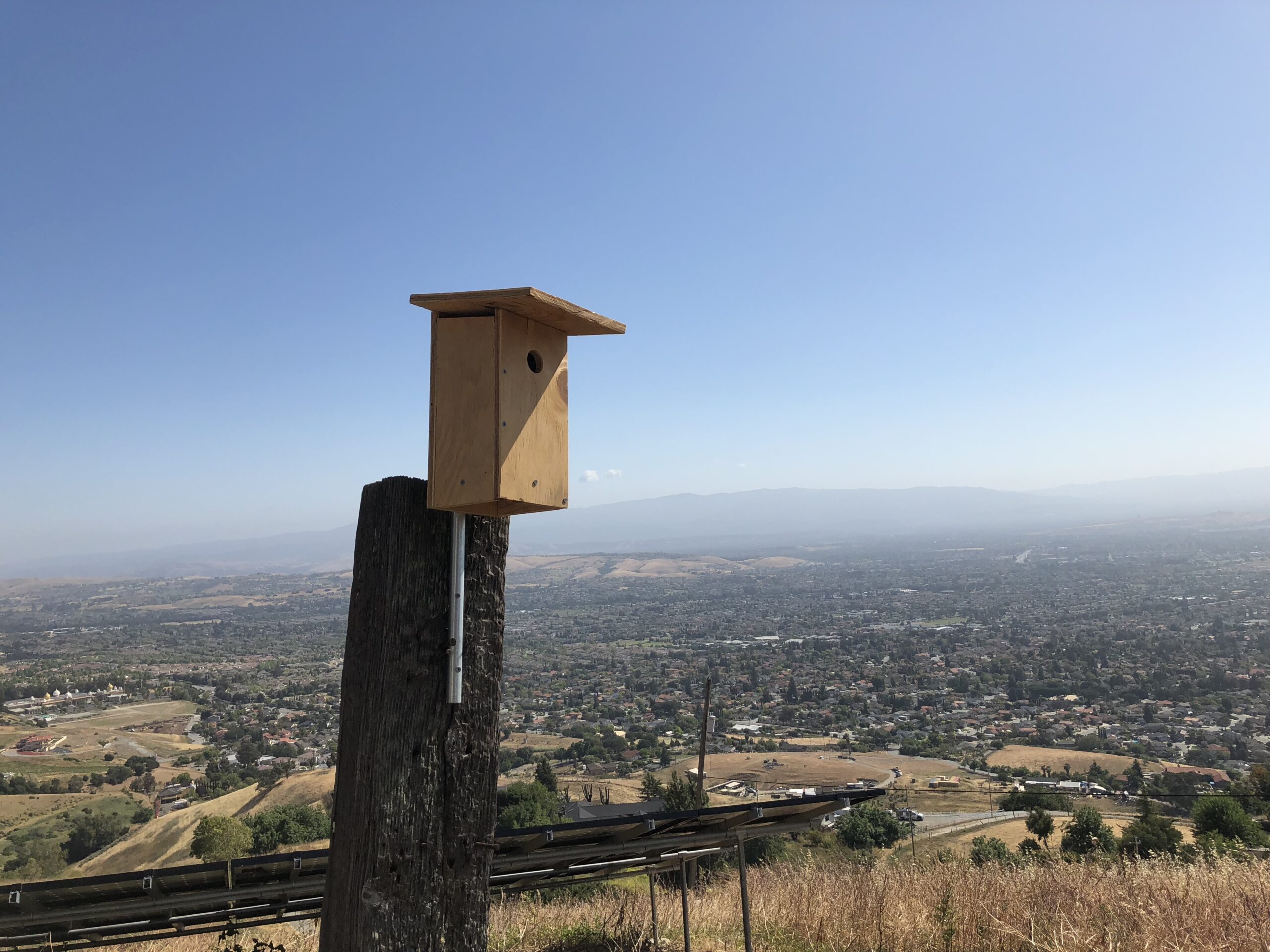 Finally a story I’ve been wanting to tell for ages but forced myself to get through the backlog of other stuff first.

One of the things on our wish list of ideas was to add some bird houses to various locations around the property. In February of 2016 I attended a presentation put on by SCVAS — our local chapter of the Audubon Society. Bird house size, hole size, access, plus care and maintenance were covered at the talk, but since we don’t have a typical backyard and we didn’t have the ability or time to manufacture our own boxes, we waited to procure boxes until we had our fences in order and the mowing situation in hand.

Here are the original notes from the presentation though: bad spelling, grammar and all.

Side open and downwards so you can just peak in

Dimensions and entrance hole size: web search: make it so only the bird species you want fits

Kerfs help some birds climb out –little ladders below hole inside

Plywood is most liked (see if I can up cycle)

Pole mounting with something like a stove pipe that collapses inward to ward off snakes and other things.  Could make it telescoping

Both of which we can harass them and remove eggs

Insecticide is an issue

Can log if you check regularly: see note sheet for schedule

About a year later when we finally had come to terms with a few of the realities of having so much land, I contacted the SCVAS and asked about buying a dozen or so boxes, but since they don’t normally get requests for large quantities, they really didn’t know how to help me. I pinged them again in December of that year and serendipity helped that time. Turns as a Boy Scout had also just contacted them with the desire to craft a bunch of bird houses as part of an Eagle Scout project.

So I was put in touch with his advisor and father and after a few back and forth email exchanges we met in person, discussed the project and I started thinking where ten nesting boxes would end up here at Purgatory.

In early May of 2018 everyone was ready. I headed out in the excavator in the morning with Agent Smith and we piloted some holes for the posts on which we would mount some of the boxes. Just as we were drilling the last hole the small troop arrived.

All told we put up 12 nest boxes that the scout built for us. Two western bluebird boxes out by the main gate, another by the house yard gate with one down near where the old kids play area used to be and another in what we refer to as Squirrel Corner (it’s where we have the most luck killing the destructive ground squirrels;) then two more in the old rodeo ring down the hill and another out by the solar panels. Two nuthatch/titmouse boxes were also installed: one up by the well tank and another under the big fir tree next to the garage.

Here’s an action shot of the box out by the house yard gate. We had a visitor that day in from Zurich and he wanted to assist a bit.

And here’s a shot of Agent Smith with the small troop after we installed the last house. Now all the remained was to see if any birds wanted to make use of them….