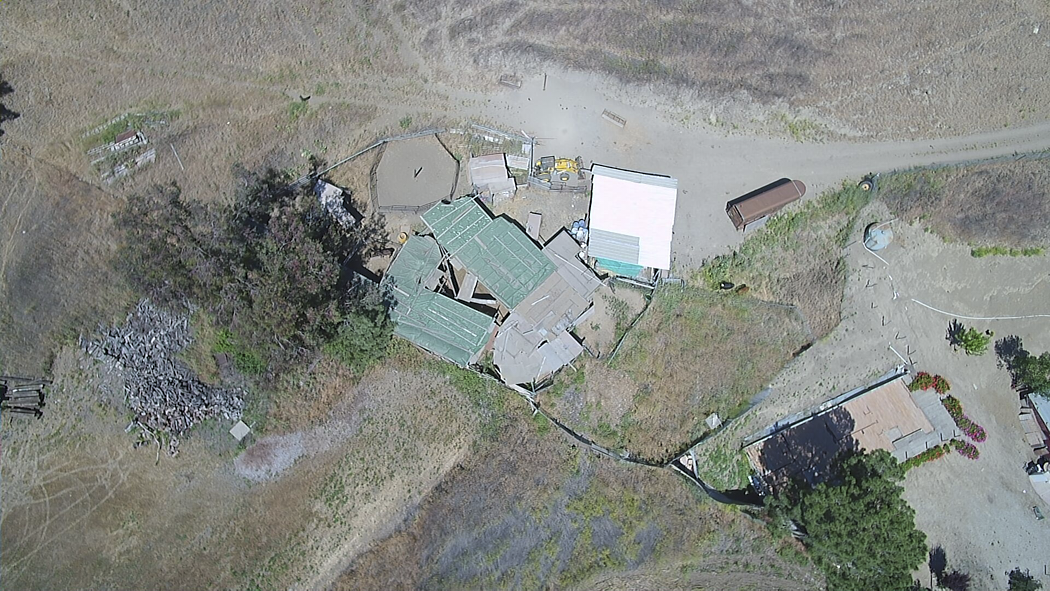 Way back in 2017 I wrote about the issue of manure seeping out of the neighbor’s animal pens. Two years later the place was finally sold to new people who moved in and kicked out the guy who had the animals that made the manure.

Part of the eviction was that he was told to dismantle the pens. Since the pens built along the property line served in lieu of a proper fence, that meant when the new owners brought in their own livestock there were many problems.

It was not a fun time.

Here’s an aerial shot of the pens as they stood at the time of the property changing hands. Of course all that stuff was built without permits: county code says no buildings larger than one hundred and twenty square feet. County code also says animal waste needs to be dealt with, but both those rules were ignored for years.

The new owners were new, so we gave them the benefit of the doubt. Sure they had a bunch of really loud parties, a ton of cars were driving down the lower road as they were apparently growing weed to sell, and they were in general loud and obnoxious, but at least they said they wanted to do something about the horrible mess of the animal pens and the general lack of a fence.

So we offered to help them. We provided both a dumpster and space on our land for said dumpster. Then when the first dumpster (which we covered the cost of) was full, we were more than happy to have the next one (which they covered the cost of) put in the same spot. This was because the area where the animal pens are located is quite a fair distance up the hillside from their main house area.

We also helped move several tons of the compacted manure as we do after all own several useful tools for doing such things. Once things were a bit tidier, Agent Smith, his father and a small work crew we hired lined up some new fence posts.

That’s when things got weird. The property line is a straight line. In the above image you can see how the old fence had bowed out. This is because the fence line is on a hillside which mean the dirt and manure from the pens pushed it westward…..which is downhill.

Now the new neighbors took offense when the new fence line we put in was not also bowing outward. So that night after we had put in the post and run the stringer, they went up there late at night and moved everything.

That solved that problem.

We had to explain to them how wrong they were and if they didn’t trust the straight-line already running down the hillside, they could hire a surveyor to sort it out, but because everything up here shifts, they’d most likely find out the entire fence line in question needed moved uphill/inward loping off five to ten feet of their western border. 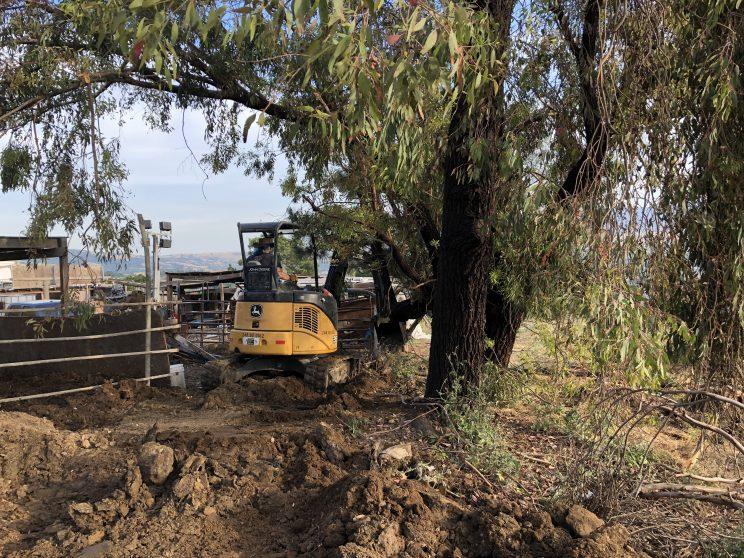 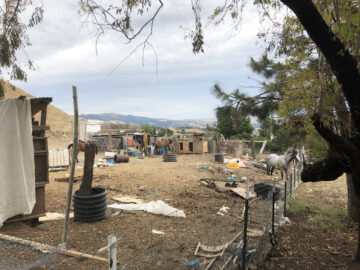 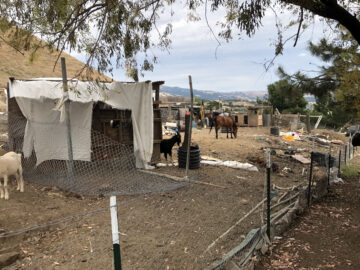 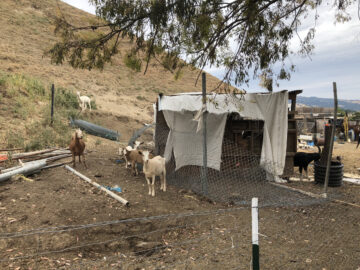 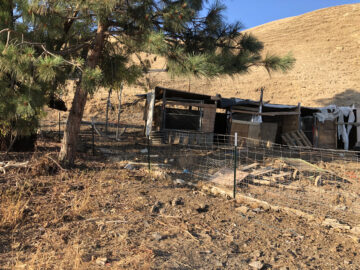 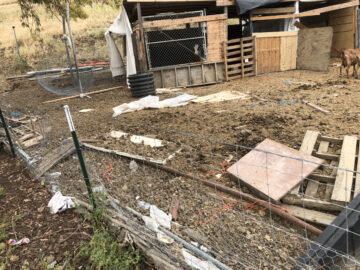 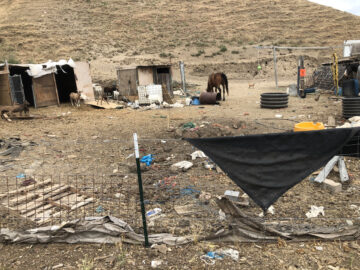 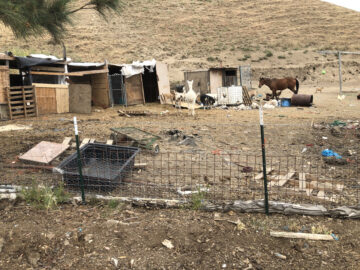 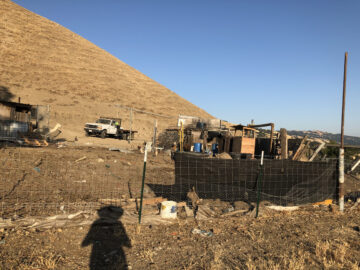 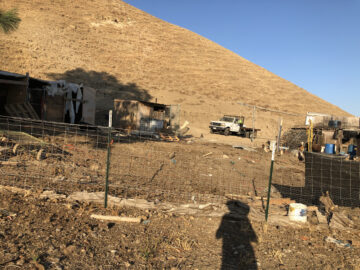 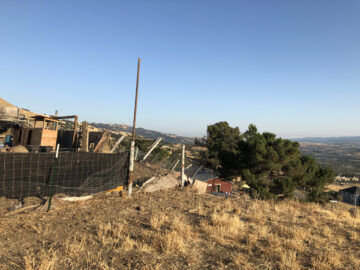 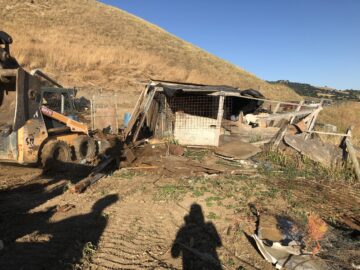 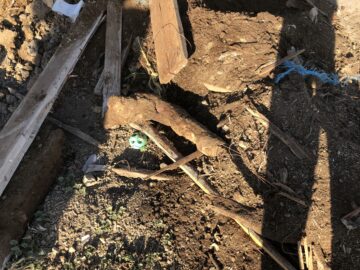 The new fence finally went in but then….they got goats. And soon we had goats getting onto our land every day.

It was not a fun experience. Thankfully our gardener is really good at roping goats.

It’s been a while since their animals have gotten over the fence, but that’s only because the neighbors got rid of all the goats and sheep. Now just have horses and a very lonely alpaca. (Side note: they never sheer or groom the alpaca so it’s not a pretty thing.)

You can just make out how wonky all the green fence posts are in this pic below. That’s all because of the horses. (The red posts are on our land and I’m not sure what the previous owners were thinking. When we moved in there was just a single line of barbed wired strong across them and it was annoying so I removed it.)

So the horses have completely trashed the fence and I’m currently sorting out how to address the issue. I’m probably going to go with six foot T-stakes, 48″ mesh wire and then a barbed stringer across the top….maybe two. I may even have a crew lined up to do the work, but I won’t know for a while yet.

That of course doesn’t address the ongoing mess that is the only flat spot where the animals congregate. They’ve torn out the shanty pens and had someone work to level the area, but they have overgrazed the land which means it’s always going to be a big oozy mess of mud every winter. 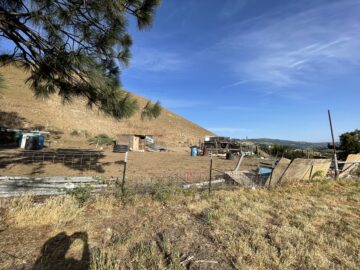 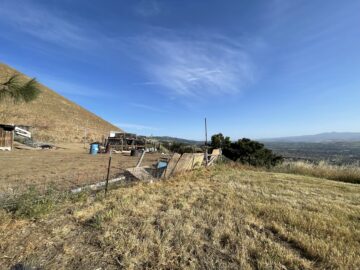 To top off this entire delightful story with a lovely icing of disgust, the new owners have a lot of people living at the property as well as a lot of visitors. These people use the edge of our property as a rubbish bin and I have to go down there every few months to pick up used food containers, empty beverage bottles and beer cans as well as all sorts of other “goodies” that they toss out their car windows.

Next up: overgrazing your land is bad….m’kay.