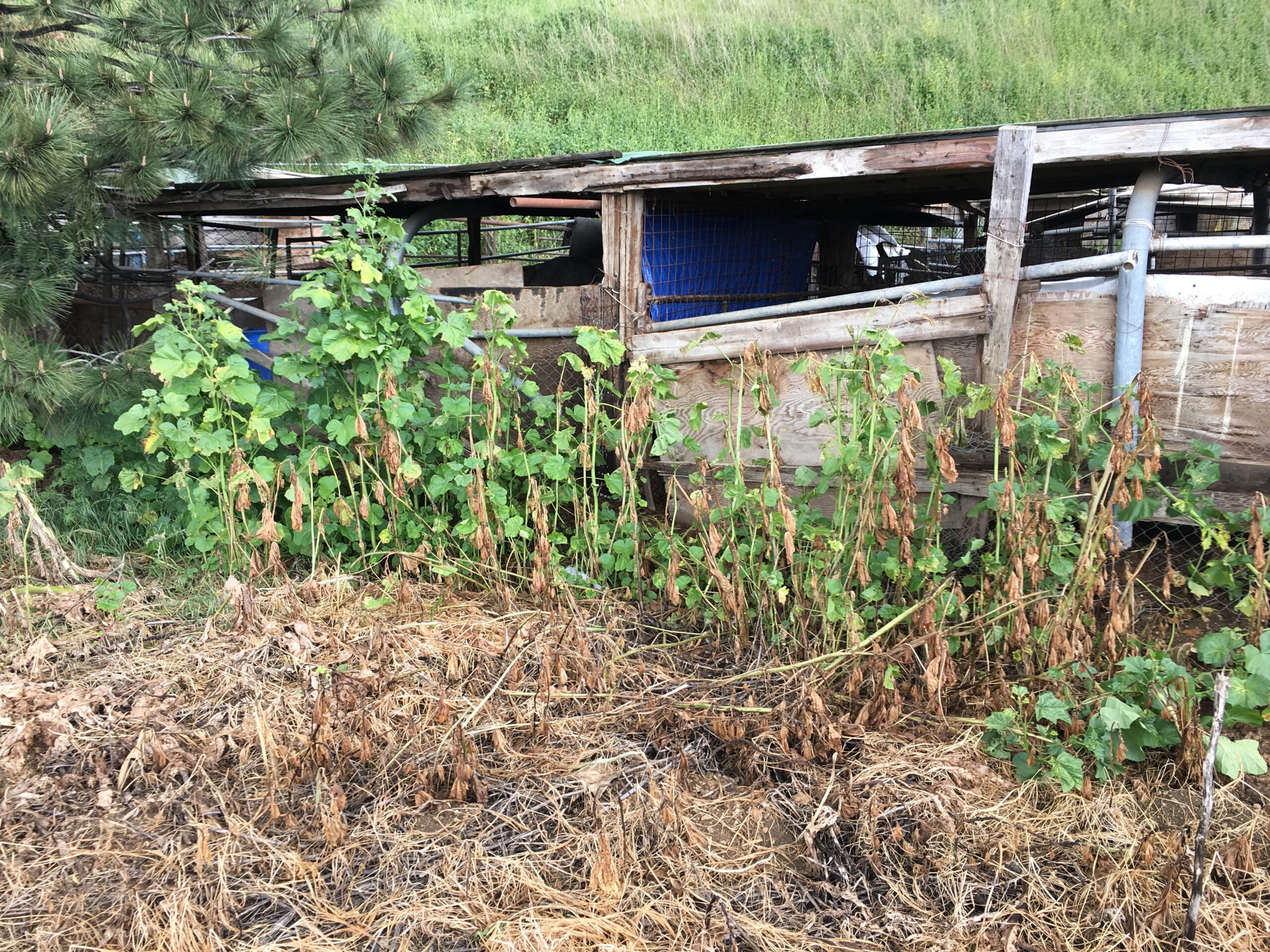 The neighbors with whom we share the eastern fence line rent out most of the eleven or so acres they own to a guy who has constructed some very dodgy animal pens.  Most of the land is steep hillside and these pens are built right up to the fence line and in some cases are now falling onto our property. To give you an idea of what you see in the above picture:  the trees are on our side of the property and the pens which house some horses and the asthmatic donkey are creeping down the hillside to join them.  On the far left side of the image you can see a steel fence post.  When we had the perimeter fencing redone last fall, we were unable to put fencing any further along the property line because of the condition of the animal pens.  We had tried reaching the people who own the property over the previous five months–I left notes at their gate after popping over when I saw people were home.  Then the property was up for sale last summer and we visited and spoke with the listing agent and asked her to have the owner call us so we could discuss what we wanted to do.  I then called twice and left voice mail with the listing agent reiterating our request.  When our scheduled time to do the fencing was near, I ended up doxxing them and located their Facebook accounts.  I sent the couple living there messages explaining who I was and that I need to talk to them about the animal pens and fencing.  They responded with a terse “here’s the number for the guy who has the animals, now go away.”

So we called the guy and spoke to him about the issue and that we would very soon be putting in new fencing.  English is not his native tongue so being clear and concise was our primary concern.  We pointed out that the waste products from his animals was spilling out onto our land and that coupled with erosion was causing the structures to now be on our property.  We were very understanding though, as by this point the property, which had failed to sell the past summer, had now entered the foreclosure process.  We agreed to wait to see what happened with that process.

Here’s a close up of some of the mess. Then here are more shots showing the extent of things. As you can see in the last picture of the series, the plywood walls end and a stone wall with iron posts at the top.  This wall then continues down pretty much to the road at the southern end of both their and our properties.

Here’s a long shot of what I mean. So when it came time to do the fencing we simply could not address this section. (Our lovely fencing crew puled out a ton of garbage that had been tossed over the stone wall though.)  All we could do was wait. After watching the auction site each month to check the status of the property and seeing that each month there was a reprieve, last month we tried again to resolve the issue. We recontacted the owners once again via FB as that’s the only contact info we have, despite providing them with our info on multiple times.

The response we got was less than encouraging.  It was basically “fuck off how dare you complain”–although they did say they’d speak to the guy with the animals. So I responded summing up much of what I already typed here about how we’ve been trying for almost a year to talk to them about the issues and we’ve been ignored at every attempt.  I pointed out unlike any of our other neighbors, they alone have ignored our attempts to be friendly and sort out any issues amicably. I didn’t get a response.  We are not encouraged.

At this point we have only a few options left.  We can get overly aggressive and use Tony to just push all the crap back onto their land while the animals are inside their pens–and there are A LOT of animals. In addition to the three or so horses, there’s at least one donkey, a dozen sheep and some goats that we can see.  And of course this doesn’t include the cows that graze the land. Another option is to involve county code enforcement.  This seems a bit mean, but we’ve spent a year trying to resolve the issue ourselves and gotten absolutely nowhere, so at this point it may be our only option.

Lastly, while the pens are an eyesore–here’s a shot of what we see from the south wing of the house from which you can make out the pens between the two trees–we’ve asked the landscape architects working for us to include a screen of plants that will shield us from seeing the pens and we’d be fine with them existing if there weren’t spilling physical crap onto our land while at the same time also sitting on our property.