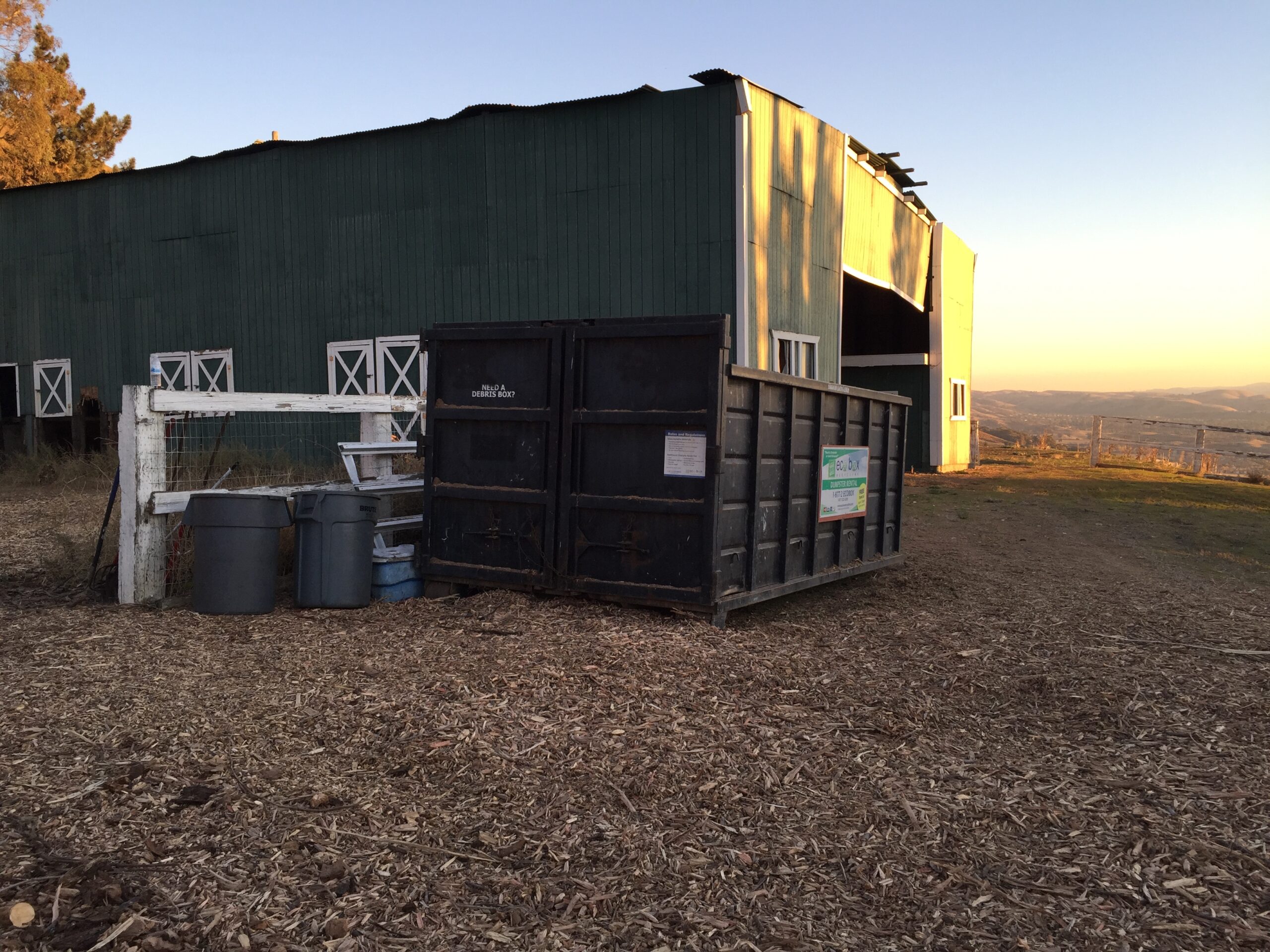 One of the less than lovely things the previous owners did while living here is that they never properly disposed of things.  Namely yard waste, tractor tires, bits of concrete, old fence rails and deck boards.

As such the area next to the barn was a giant trash heap: and when I say giant I mean about half the size of a football field and between four to six feet high.  To give you an idea, here are some pictures we took this summer.

There’s also this image (panoramic) I took last month.  If you pop it open you will see the trash heap from the back side and thus hopefully understand how truly mammoth the problem was.  Out here, such a mess is a definite fire hazard and we were worried about being cited for it.  Apparently the previous owners had no such qualms though.

The guy who mows the pastures stopped by when AS’s father was visiting, and he kindly provided me with some names and numbers for contractors who specialize in tree trimming and chipping.  I met with two of them and made arrangements with the one I liked best (Tree Techs By the Bay) to do the work.  While rain delayed things by a week, last Tuesday they arrived and started the work.

Here’s a shot after the first couple of days.  Everything you see on the ground is fresh.  They had to clear enough space inside the area first. Also that is the first of THREE dumpsters they managed to fill.  And I checked, they were very organized about arranging the un-chippable boards and other things they found.

This is an early pic after we managed to get the chipper inside.  On the first day I was actually of use as they didn’t have a 4×4 truck that could easily move the chipper on the wet surfaces.  So little me got to hop in our truck (Barbie), back her up to the chipper, and after they hitched it up, I backed the chipper into place for the night.  I was very proud as it was the first time I’ve driven the truck with something attached to it.

Here’s a pic of later in the week when they had actually made progress inside the pit.

This being Purgatory though, by Thursday we hit a snag.  Because the previous owner’s method of dealing with the pit had been to just run an excavator over the top of the trash to flatten it down, we were left with this sort of thing.  What you see are layers of compacted garbage.  Tree branches on one layer, old fence rails in another, with a tree stump and logs underneath it all.

Still the guy’s persevered and by Saturday this is what the area looked like. Since it is somewhat sheltered, we may eventually plant more trees in the space, but one delightful little discovery was the prescence of a handful of walnut saplings (you can see them in the below pic.)  These little guys managed to sprout from walnuts carried back to the pit–probably on limbs cut from the two large trees we know were planted by the family that originally built the house.  They somehow make a go of it– growing up above all the garbage–and are now pretty sturdy little guys.

While the crew will be leaving with me with a few small piles of palm fronds like the one pictured below, the area closest to the barn will soon become an organized little composting area.  We have already ordered our very own chipper (although much much smaller than the one these guys have,) and we will get a proper composting bin for our kitchen waste.  (One other thing they did was to clean up the skirts of the fir trees you see in the background.)

The crew took Sunday off and were back Monday morning to finish the work.  All the bits trimmed from the trees (another post will following detailing that work) were chipped as well as some branches and debris from back on the other side of the barn.  This not so great shot shows the piles of chips we have over there (those animal pens on the fence line are our neighbor’s.)

But the fun news is that they uncovered this relic:

It’s some sort of farm machinery and when the wind dies down, I will have to take some better photos so we can properly identify it.

Still, it was a chaotic week at Purgatory, but things look so much better and we now have a lifetime supply of wood chips.

taken from the same angle as the first one.