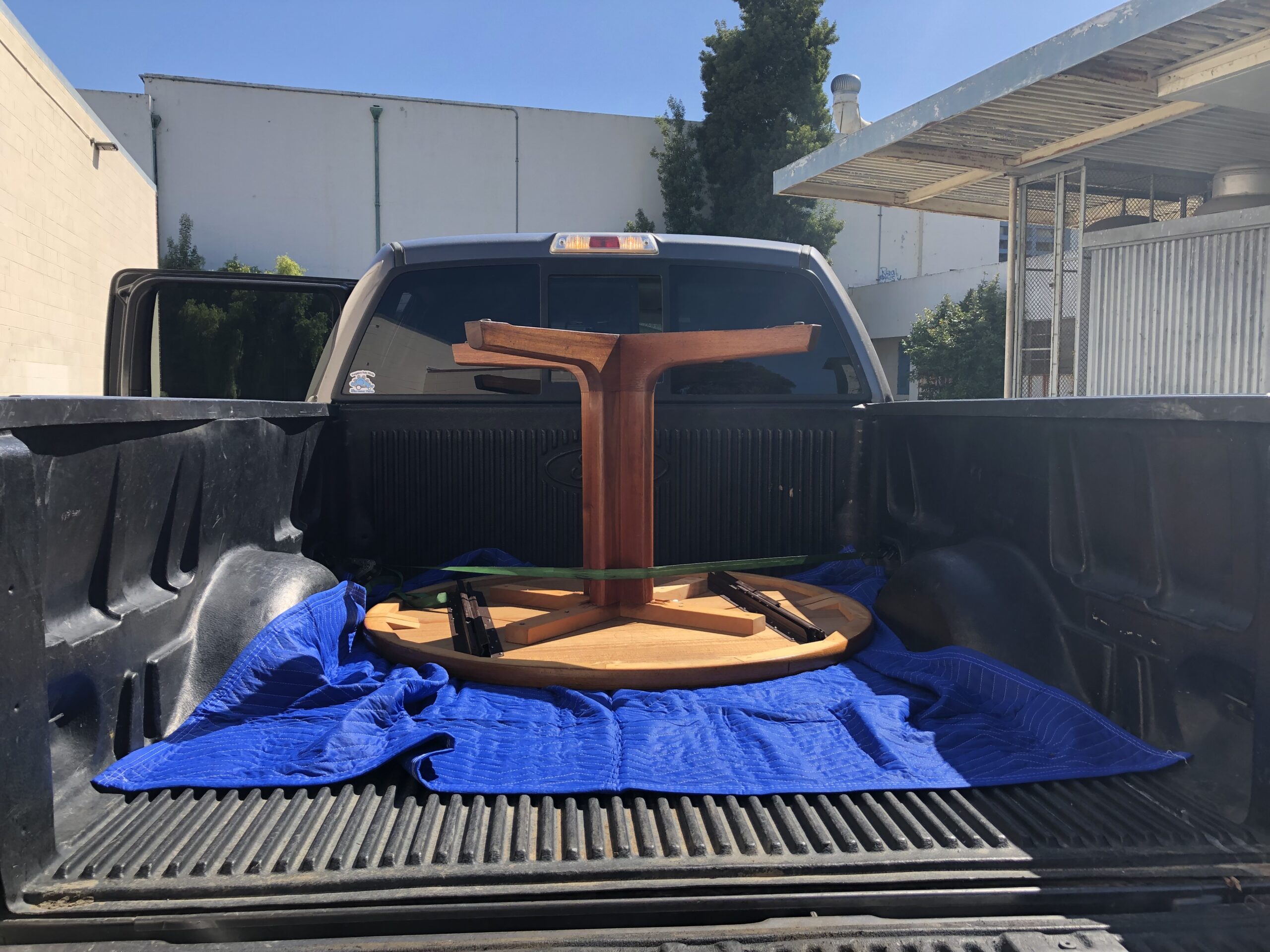 Way back early on after buying this place Agent Smith and I discussed ways to furnish it that did not involve rushing off to IKEA, Restoration Hardware or some other mass-produced furniture outlet. Instead we thought we would take our time and perhaps investigate the estate sales market.

A few years into living here and the opportunity to find, let alone attend suitable estate sales was proving difficult. Then a friend recommend a couple of local auction houses that not only handle interesting art and trinkets, but also furniture.

I perused their offerings online and then back in May of 2019 I found what I thought would be a suitable table for the great room. A lovely Mid Century Modern table with two leaves and some water damage….

So while visiting family in Florida, I bid online and managed to win the table for far far less than anything I could have picked up new in a store. Once home I made arrangements to drive up to Alameda to pick it up. Thankfully we have Barbie and thus bringing home furniture isn’t a terribly difficult thing. I’m actually getting good with straps too!

The water damage was more extensive than I originally thought as you can see in the images below, but when Agent Smith’s father visited a few months later, he made very quick work restoring the veneer and he even raised up height by about two inches by building some extra blocks for where the legs meet the underside of the table.

Here’s a shot of the refinished table and then one of it with some placemats I found on Etsy.

A word about the chairs, as you will have noticed I only mentioned buying a table and that is because I got incredibly lucky: see a California based chain called Orchard Hardware Supply which was purchased by Lowe’s and then eventually shuttered was a store we often frequented. Shortly after moving in I picked up a small little table and two chairs that were technically patio furniture from Orchard. For several years they sat in the upstairs of great room as our sole bits of furniture.

I ended up kicking myself pretty hard over the fact that I only bought two chairs, as the more we used them the more I became convinced they would be excellent dining chairs. Problem was I had just purchased two of them and the company that made them had changed the design slightly so I couldn’t simply just buy a couple more. Fast forward to early 2019 and when the local Orchard was liquidating stock, I popped in and in the jumble of eucalyptus wood chairs made my Outdoor Interiors there were two of the original design and even better, they were on sale.

So for well under half the cost of some fancy-smancy thing from a place like Crate and Barrel or even IKEA we now have a gorgeous table and chairs that totaly work in the space. How awesome is that?

But I wasn’t done with what is now my very favorite auction house….