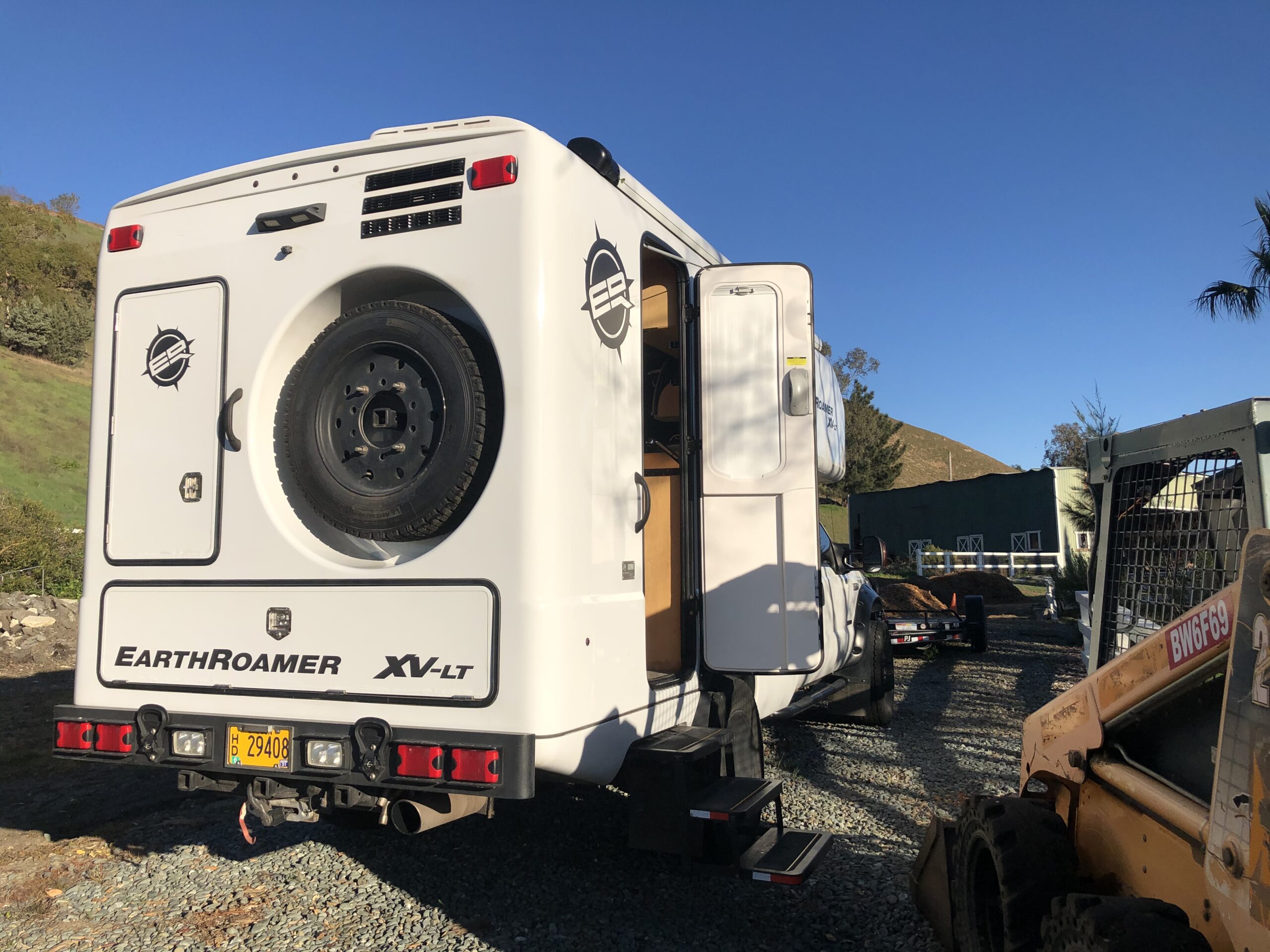 As most of the world knows, a lot of the state of California is currently on fire. Right now the area where Purgatory is situated is currently beset with wildfires that were started by a a bunch of lightning strikes that occurred a week ago. Thankfully we’re all safe and right now it looks like we may be out of danger. Fortuitously, back in February we finally purchased an RV that met our weird and various needs and she has come in quite handy.

Here are some pictures of Midge — a 2007 Earthroamer. It’s a fitting name since she is a Ford and our F150 is named Barbie.

It took us several years of looking at RV listings online as we wanted something similar to the cute little Toyota Hylux we rented and drove from Adelaide to Darwin the year before we bought this place.

But in the years of searching we digressed as our needs for an RV were a bit non-traditional. While it is just the two of us (Agent Smith and myself) we wanted to be able to travel with the boys, who by the way if you didn’t know have their very own instagram account. In addition we wanted an RV that could tow the race cars. (Yeah you read that right — we now have several, but more about that in a future post.) Over the years of searching our — well mainly Agent Smith’s — search net morphed into various forms. For a while he thought a big diesel pusher would be adequate or a converted bluebird (aka school bus,) but getting something that large up our narrow and winding roads could be an issue. Finally we narrowed things down a bit and went back to smaller options. In February of this year we found a suitable option for sale and made the journey down to Palm Springs to see it. While a bit rough, and wreaking of sandalwood, it was deemed suitable, so we bought it.

So I said we made the journey….all four of us went down to Palm Springs in the Carrera. I tried out a new travel option for the boys: a new carrier with a divider to keep them from bickering.

The carrier was basic and more like a prison cell, but it was mostly successful. The drive home after purchase was a bit more exciting, as while Agent Smith drove Midge north, it was just me and the boys in the Carrera for many hours and needless to say by the time we got home they were pretty pooped out. They were more than happy to sleep in the next morning and thus let us sleep in.

Since February, the rest of the world has obviously changed over to our way of life and is also “enjoying” our pretty normal shelter in place life style. We’ve used the time to get Midge ready for our use. This process involved lots and lots of cleaning — mainly to get rid of the disgusting overpowering smell of sandalwood, but also to remove the grime created by the fact that the previous owners had a small child that made lots of small messes. Agent Smith replaced the cab stereo head unit and redid quit a bit of the electrical wiring for the audio as well well as the optics for the rear view camera, plus we had our Ford techs down at Mission Valley Ford handle replacing the breaks which were….well awful.

This is what the inside of Midge looks like. As you can see she’s a pretty compact beastie. Built atop a Ford 550 truck, not only does the cab comfortably seat four, but she has a full kitchen, bathroom and tons of storage space in the back section plus a king-sized bed with decent headroom above the cab. Her exterior boasts even more storage and there are solar panels on her roof to power both battery setups.

We picked up a couple of travel cages for the boys and those fit nicely across the collapsed passenger seats. Plus I had some new cushions made that, while not perfect fits, are much better than the vinyl ones she came with — although we’re keeping the vinyl ones as they’ll be useful for when Midge is off to the races.

We did some light shopping over at the Pyrex.com and Corell.com websites a few months back and picked up some dishes, knives, utensils and spare storage bowls.

The dishes however are prone to rattling about in Midge’s storage cabinets, so I took some spare headliner material we had left over from a Mini project and whipped up some nice storage envelopes for them.

They fit nicely in one of the cubbies above the sink.

Anyway, since California is on fire…

…Midge is currently sitting out in the courtyard packed and ready to go. Our area was placed under an evacuation warning and then an evacuation order late last week. We did leave, but returned once things looked safer per the reports and maps. The evacuation orders were pretty broad and while portions of the fire did make it into the valley to the east of us, by Sunday CalFire had managed to stomp it down through a combination of dozer lines and retardant drops. Add to this the predicted second lightning storm was minimal and at least in this instance, everything up here survived without issue.

#SCULightningComplex fire threat to #SanJose is currently minimal. The line on the western side of the fire on our city border is well enforced. We’ll continue to monitor the situation and encourage residents to be ready for changing conditions. Follow @calfireSCU for updates. pic.twitter.com/zcRSuGN83u

The pic on the left shows the lake at Grant Ranch which is in the valley on the other side of the small mountain we live upon. The area behind it is all burned: it should look much like the foreground.

And here’s a satellite image from yesterday showing the same area from above. The white dots are the Lick Observatory and you can just see the green oval of the lake at Grant Ranch on the left side. All that misty white stuff across the image — that’s smoke from the embers burning themselves out. Lastly, the dark brown areas…they should look like the bottom left area of this image, but well….fire.

The Lick (link is to the wikipedia page) was the one point amidst the 360,000+ acres of land that burned where much effort went into keeping it intact. While the crew from SLO stationed up there did lose a structure (one of the staff housing units,) all the telescope domes and visitors center survived the night, but it was not an easy job. Here is the video from HamCam2 during that really scary night.

Now, because the Diablo range/East Foothills are primarily grasslands, just about everyone who lives up here adheres to weed abatement standards set by the county.  That means if you don’t have livestock to graze the land, you mow and/or disc each spring to create fire breaks around all structures as well across larger pastures.  Two years ago we did have a 40 acre grass fire that almost reached our south pasture. In the below video you can see how the grass just down from where the video was shot had all been mowed and then down near the road it’s all clear as well.

Because a lot of the vegetation on the west side of the range is abated/managed and we do not have the steep and deep canyons, fires on this side are somewhat easier to combat compared to over by Mt. Hamilton.

While writing this post, the evacuation order was lifted and thus life should start its return to some form of normal. Although the short time spent in Midge made us realize we needed a few extra comforts — like a dedicated vacuum, a better way to keep the dishes secured (handled!), and some containers to make better use of the long storage cupboard next to the bathroom.

Still we’re now ready for the next great escape.

One addendum: I said that the lines for what areas were under evacuation warning or orders were broad, but they were also a tad confusing. When the first series of orders went out, we were left to interpret them to mean “don’t go to the garage or stables or the east side of the studio, but the main house if fine”. The agencies did get more organized as things went along, but this image is still amusing.

Midge is a good wench with a winch in the front and winch in the back. The question then is which winch will winch best when Midge needs a winch?

Yarr fore and aft winches have ye. Avast ye one should be hanging from the mizzenmast. Oops talk like a pirate day has come and gone. The aft winch would work well for hauling a crippled car from a day at the track onto a flatbed trailer for the sad trip home. The fore winch is most useful for pulling somebody back on the road yourself included. Great for moving that tree truck blocking the road. Could pull down offensive statuary with it. Having 2 is certainly a luxury.