Continuing on from the last post: we have a lot of weeds and grass on the land.  Most of the weeds are now taller than Agent Smith and a few weeks back he did a bit of mowing to practice using Dino on the land.

Here is a before show:  that’s the old rodeo ring completely filled in by weeds in the middle foreground. Here is an after shot of the same area after Agent Smith used Dino.

And then here is a shot from down in the rodeo ring.

This pic below was posted earlier, but it helps give a sense of scale.  This was taken with a long lens and Agent Smith is actually standing up while driving Dino. 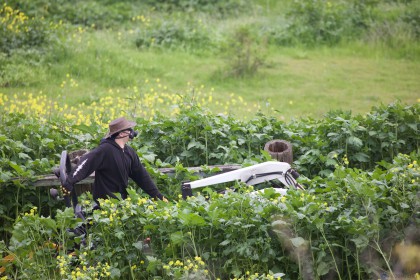 He hasn’t been the only busy one.  I’ve been learning to wield our smaller cutting devices.  Namely a metal disc weed eater, large hedge trimmers and a standard wire weed trimmer.

Once again a before shot.

Followed by an after shot.  Didn’t take terribly long so there is some hope we’ll have things in shape before the deadline.

“Deadline?” you are probably now wondering to yourself.  Yes, we have to abide by county weed abatement regulations.  Normally the yearly deadline for compliance is April 1st, but we’ve already been notified of one extension (4/15) and since it’s generally not safe to mow the hillsides around here until several weeks after the last rains and the last day of rain so far was 3/20, we are expecting a second extension.  Never-the-less we’re prepping to be able to handle a lot of the job ourselves.  The Mowing Man will be around to handle the big pastures (especially the hillsides) and spray to keep weeds from regrowing near the fences.  Once that it is done, well then we’ll tackle the next bit…