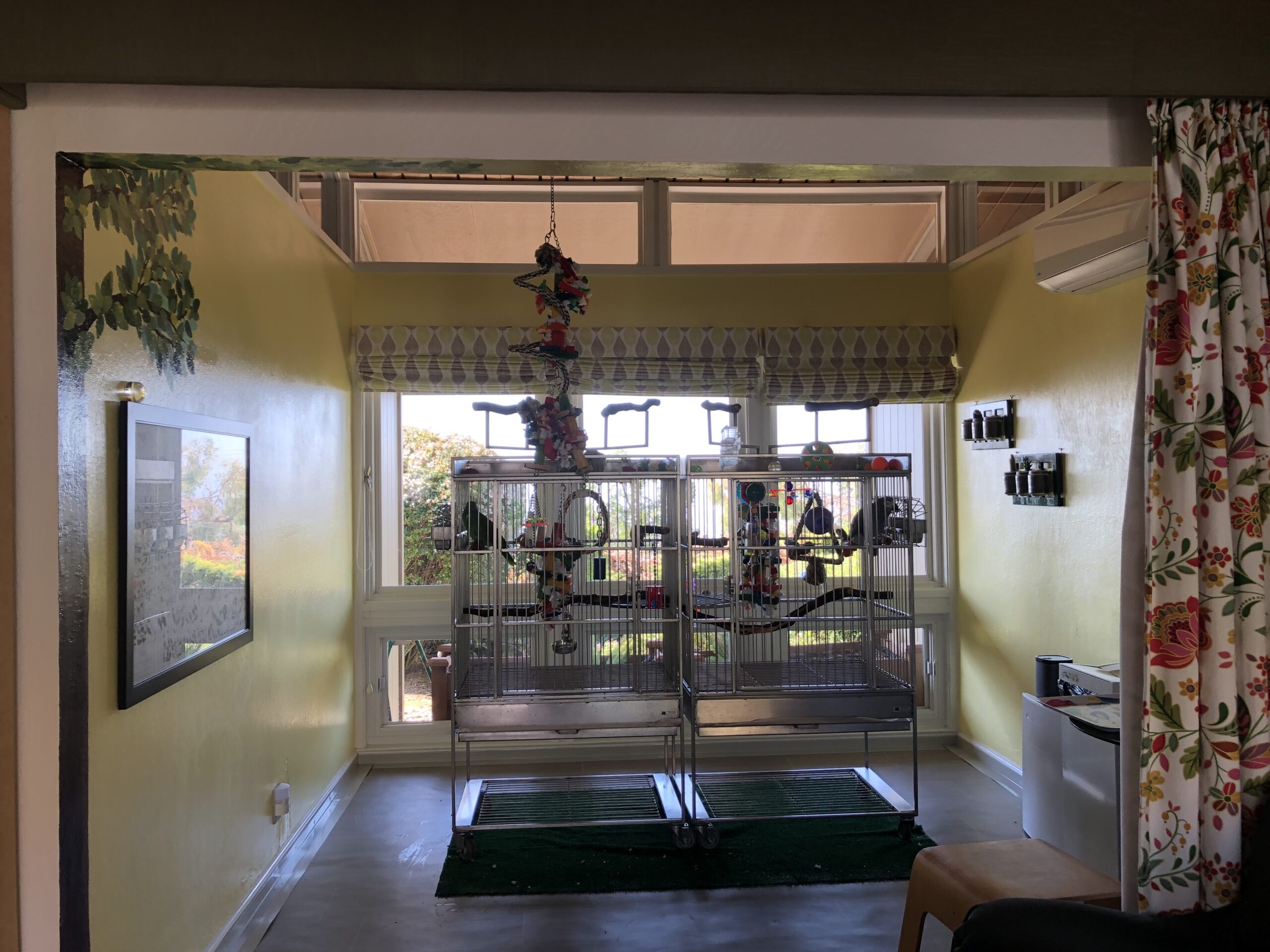 Regular readers of this little blog know that we have two large parrots that share our world. While Tenar and Thlayli (Thy for short) are basically feathered dinosaurs, they are usually pretty smart. Imagine winged five-year-olds kids that prefers to walk, or waddle, or shuffle backwards throughout the house. (You can see regular posts about them over at their Instagram Page: PurgatoryParrots.)

Most early mornings they wait patiently in their alcove/room with the blinds drawn and the curtain closed until I am up and open up their space and let them out of their cages for the morning. Some mornings or if we forget to draw the curtain/blinds, however, they can be a bit “shouty.” On such occasions it is not uncommon for me to stumble down the north hall, duck through the curtains, open up their cages and then head back to bed. Usually about fifteen minutes later both of them are in our bedroom. While Tenar wants to come up on the bed where he will happily go back to sleep next to me (and not poop on the bed,) Thy prefers to hang out under the bed or elsewhere in the room.

Once the day is started, they are usually given breakfast before 10am (although with Shelter In Place, this is sometimes closer to 11am,) then they have a siesta until evening when they shout for me to let them out so they can raid each others’ food bowls. Each has particular likes and dislikes: Tenar loves peas and beans and Thy prefers apples and oranges. While they each receive equal amounts of whatever fresh food is on the menu that day, inevitably there are things each doesn’t eat and so they enjoy swapping cages to pilfer from the other.

I should also mention that they don’t have “assigned” cages. They are free, both when breakfast arrives and at bed time, to enter whichever cage (the right or left) that they chose — first one into a cage gets that cage sort of deal

Anyway, as I said, they are usually pretty smart–about the same sort of intelligence you’d expect from a kid in kindergarten, but while they are both over twenty years old , they behave emotionally more like toddlers.

Case in point, back when we had the floors refinished and their cages had to be moved to the studio building, I was away for a night and Agent Smith didn’t give them their breakfast in a timely manner. Tenar (the Amazon) decided it would be a great idea to fill his belly with some cardboard off a toy that was in a cage.

The cardboard gunked up his GI tract and he ended up spending a week in hospital (aka the vet.). I was able to visit him during the week, but he was pretty groggy. They kept him on fluids to help him pass all the goopy sludge, and eventually he started eating and pooping normally and was able to come home where he will never be allowed near another bit of cardboard again.

While he was at the vet’s I got his and his brother’s space sorted. New vinyl was purchased as well as a piece of felt underlay to help protect the now pretty floor. Then I picked up some new flashing to put down along the edges and thus protect the baseboards from any chewing beaks.

Thus by the time Tenar was home from the vet, both cages were back in their normal spot in the alcove of the north office.

And things were good for a while….but then….