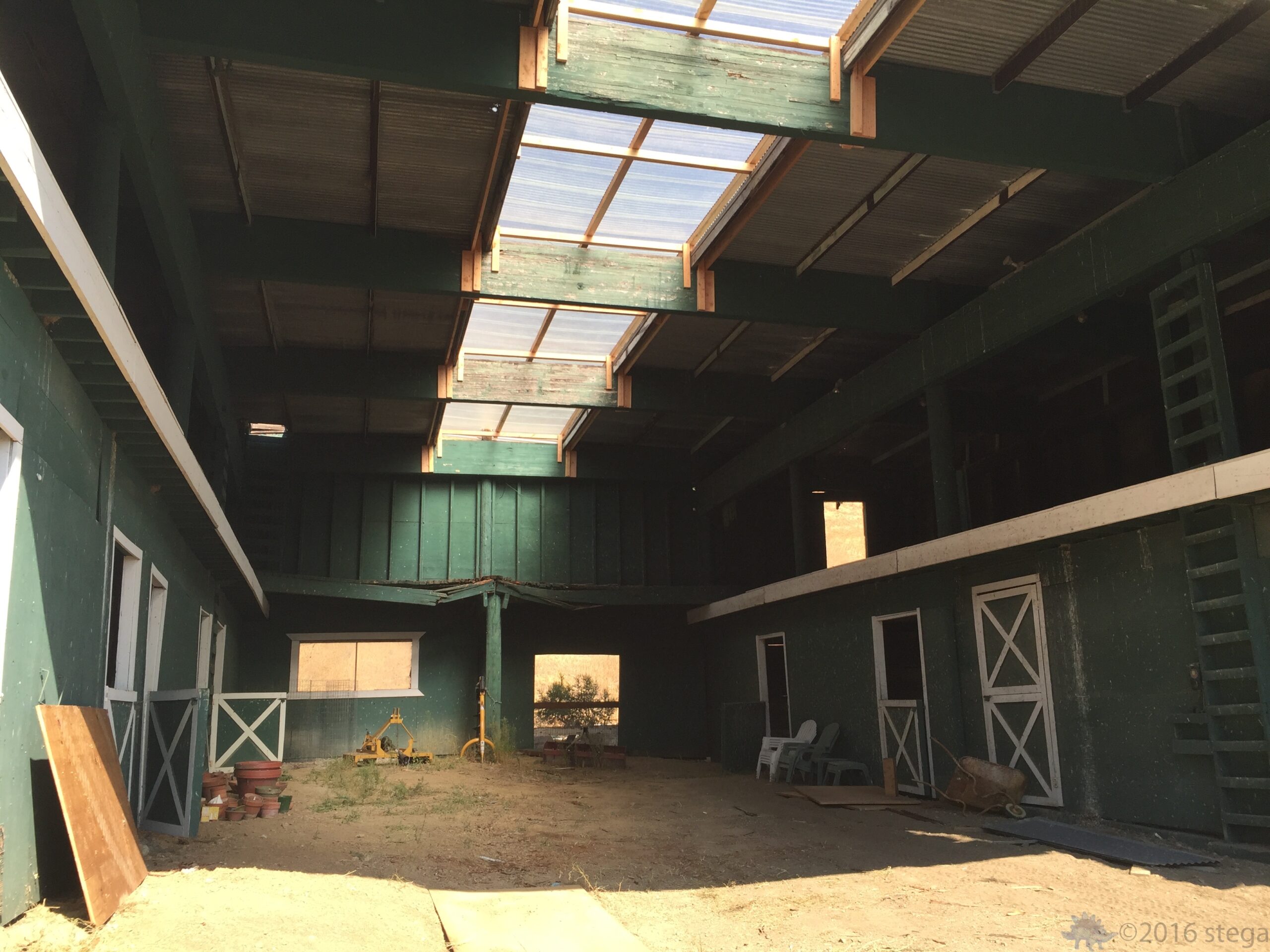 In late August/Early September we had a team of guys in over two weekends to put a new roof on the stables.  This was to help keep the interior dry until we can sort out (in a few years) what to do with the structure.

The stables/barn is a very unique structure as it was built sometime after the house was built in 1966 but sometime before the majority of the ribbons hanging in the tack room were won (1970-1971).  Constructed with a combination of railroad ties, telephone poles and some very large beams out of an old warehouse off Brokaw Road that was being demolished, it’s a mammoth building and at the time of the re-roofing, it was full of a lot of junk.  (More on that later).  There are five stalls on the left side, three stalls, a tack room and an office on the right side.  At one point there was power to the structure and there still is a run from the well tank down to it but we have that valve firmly in the off position. Here are shots of the stables from when we first looked at the house.  (You can see the giant trash pile just to the left–it went away a year ago.)

In order to secure the building a bit against the elements a team of guys and a couple of cherry pickers were employed. Here is a shot of the setup. We rented the big cherry picker from United Rentals and then we got a second from Home Depot as having two made the job go a lot quicker.  The larger was particularly prone to getting stuck in the loose soil with in the stables.  Here’s a shot of the two of them in use. A close up of the more portable if smaller unit before we took it back down the hill. The next weekend we got a second small unit for the weekend.  Here’s a shot of it next to the larger unit.  It was nimble enough we used it to change the light bulbs in the courtyard lanterns as mentioned in an earlier post. The crew reinforced the old glue lams which is actually what took the bulk of the time and effort.  Once that was done, they put down new tin and translucent tiles. Here’s a shot of the finished work. As you can see the holes in back were taken care of as well.  We’re just crossing our fingers that things stay put this winter.  We can get some really strong winds up here on the semi-mountain so we won’t be surprised if a few piece of the roof are pulled off.  But should that happen, I now know how to operate a cherry-picker…