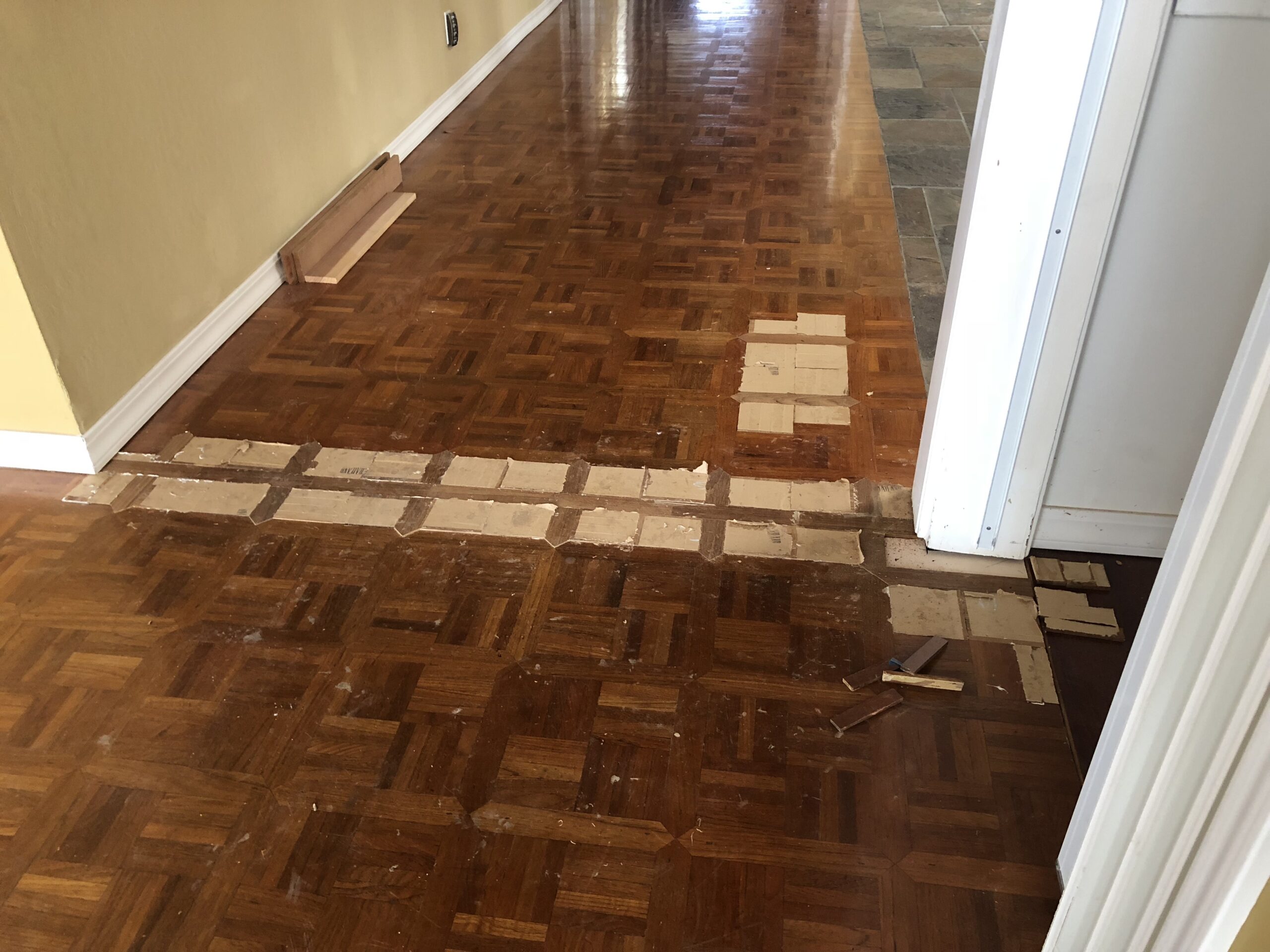 Before the teak that runs through most of the main areas of the house could be refinished a lot, and I mean a lot, of repairs had to be made.

There were in total five old furnace register holes, three monument outlets (that just means they were in the floor/ground,) and then some sections that were damaged by water long before we bought the place.

One of the very few good things the previous owners left us was a box of parquet teak pieces that according to the newsprint I found in the box were purchased in the mid-90s.

Now that we had the boards to match the flooring in the blue room and north office, it was just a matter of scheduling. Since Agent Smith’s dad was due to visit late that summer, it wasn’t until mid-October that this project got underway.

Scott Leslie, the owner of Leslie Hardwood Flooring did all the repair work himself. He’s a total floor geek — I love contractors who love what they do!

The two areas of most concern were where serious water damage had occurred sometime in the past. These were going to mean quite a mess would be made before things looked remotely good again.

The area by the west-facing sliding glass doors of the great room had seen some serious issues in the past. It took Scott half a day to expose all the damage, deal with it and then get things ready for new teak to be added. Complicating things were that there was a hole from an old furnace register in this area.

There was so much damage that he had to repair and/or replace the floor boards underneath.

Immediately to the left of this are was not only a second furnace register hole that need to be filled in, but also a monument outlet. Plus just to the right of the water damaged area was the second of the three monument outlets we wanted removed. (We had decommissioned the electrical service to all of these way back in 2015 when we had the main electrical panel replaced.)

Then there was the matter of the junction of the foyer and great room. At some point there was a persistent water issue that funneled water down from the roof above.

We encountered this issue early on and have since learned to keep a calendar reminder going to make us check the drain of said roof so it doesn’t happen again, and while we rebuilt the inside of the coat closet early on, we knew that section of the floor was going to need some extensive repairs.

Because the damage that occurred before we bought the place was so extensive (and so much more than a one time leak,) some serious excavation of the damaged area was needed.

Scott Leslie ended up removing the entire section from the corner pillar of the foyer/coat closet to the opposite wall as all the underlying wood/floor boards had extensive damage.

Then he put in a new underlay board.

Once it and the sealant he put in cured, he got to work laying in new parquet, but because of the settling of the house over the last fifty years, coupled with the damage, it wasn’t going to be a “perfect” fit.

He ended altering the parquet pattern ever so subtly to address the issues. As you can see in the image below he used some of the long pieces to create a long line and then he shaved a bit off the smaller squares so they’d fit in the spaces.

There were a few other holes left from the old furnace registers, but these were fairly easy to address.