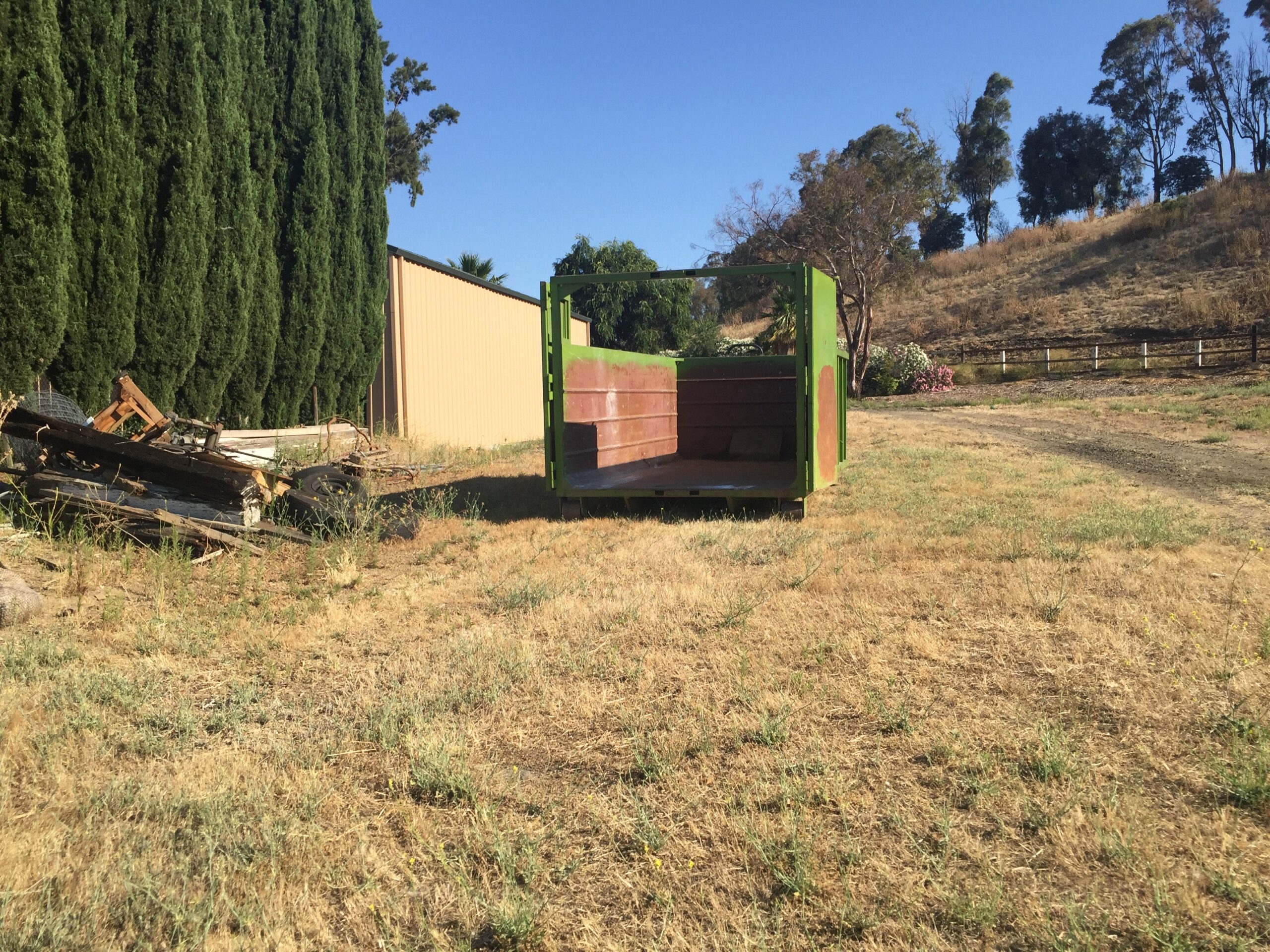 Last summer in July (2017) we completed the last major cleanup event here at Purgatory.  We got in another two dumpster and piled yet more debris left behind by the previous owners into it.

At that time we were also getting ready to start the studio remodel, so here is the list of all the affected areas the crew and I covered.

– [ ] Remove everything from Studio
– [ ] Ties out at water main
– [ ] Last of debris behind stables to dumpster
– [ ] Clean up west fence line
– [ ] Chunks of asphalt along driveway to pile
– [ ] Fallen branches to wood pile: kennel, by gate, and on way to well
– [ ] Put pile outside SportsCourt in dumpster
– [ ] Asphalt rocks to bottom culvert
– [ ] Finish weeds along road

We managed to get everything done except for completely filling the drainage chasm that was slowly opening along the edge of the south pasture.

Here are pics of some of the work:

Debris behind the barn including old rotted fencing rails.

There were a couple of old metal drums that we picked up and crushed with Bambi.  Lots of icky water oozed out of them before we chucked them into the dumpster.

And while we were shifting these boards, we made a startling discovery.  Namely our first up close encounter with a rattle snake. Sadly when the snake appeared he startled the guys lifting the boards and when they dropped the boards back down and sprang back, one of the boards had a nail in it and the poor snake got said nail right through its head.

We left the body out by the stables and in a few days time wasps had just about stripped it clean.

We also cleaned up all the debris that was up at the well tank — mainly the boards that the old steel tank once sat upon.  For those we had to chain saw them down from the ten and twelve foot lengths into more manageable sections.  Then we loaded them into Barbie:  thanks to the handy gate we now have up there it was a fairly easy endeavor. Then there was some debris down by the other new gate in the south pasture.

And then with a bit of mashing to get things pushed down below the top we had a very full dumpster.

And here’s a pic of the crew.  The guy on the left is our general helper, Ben.  He came to us via the Great Wall project and likes to come do side work with us a few times a year.  He’ll bring along two other warm and ready bodies to lift and carry.  Between the four of us we accomplish lots.

Finally here’s a shot of behind the stables once we were done and then two aerial shots showing the area before and after.