A while back we started having issues with livestock from a property down the road.  The acreage is rented out to a guy who hasn’t done the best job maintaining the fences. In addition he allows the animals to overgraze the land and they start getting hungry, so as a result a collection of horses, sheep and a mule were able wander all over the hillsides–including onto our land.  Not only was it annoying from a smell perspective, this all was happening while we were in the middle of the pool resurfacing project.

And we’re not talking about an occasional stray lamb–we’re talking about having to hop into the mini-truck three times a day to herd a dozen or so varmints out the front gates, as that is the only way in now that our perimeter fencing is tidier.

Here are sheep at the start of the driveway (taken from the easement.)

Sheep out near the stables….

And the mule.  I actually felt really sorry for this guy.  He had a huge wound on his left shoulder that was so covered in layers of flies it moved on it’s own. 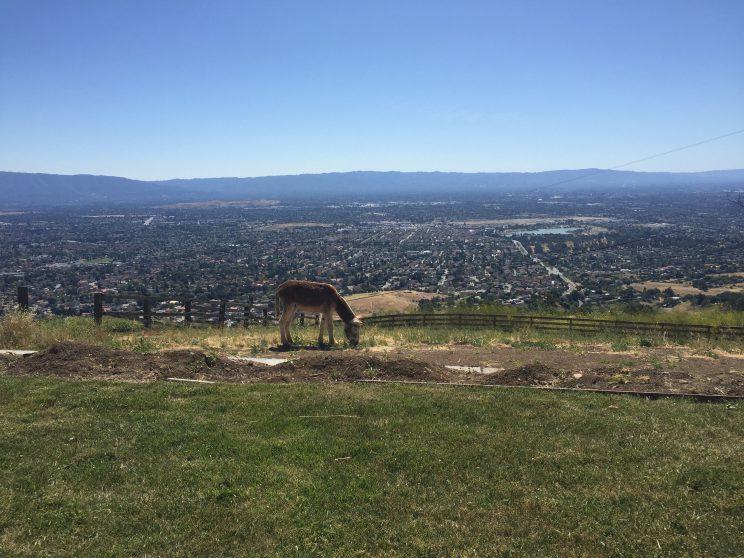 And here is a shot of our gate:  because we’re still shopping around for a new head unit to allow better control (right now the controller requires a machine with Windows 3.1 to access it) the only way to keep the gate shut is to manually close it and run a chain through to secure it.

After four days of issues things were quiet for a couple of weeks, but then the invasions began again.  Since I had called animal control to report the problems a few days after the first wave of invasions (and they cited the owner and made him take the poor mule to a vet immediately to have the shoulder wound dealt with,) it became a matter of waiting for the stinky sheep to reappear and then to call county animal control so they could come try to collect them.

So one sunny day AC rocked up with their trailer and we tried to get all 13 or 14 stinky sheep inside.

It was exhausting work made difficult by the fact that mini-truck was having a battery issue and thus out of service.  This meant I ran several miles–usually at a sprint while wearing my wellies.  Seeing as running is a rather painful thing to do thanks to some old injuries, I was a bit more than just sore the next day.  Still in the end we managed to get 7 stinky sheep into the trailer.

And then once Agent Smith returned home from Sonoma where he was buying a new seat for The Bus, three of the sheep showed up again and we managed to capture the ring leader.  She spent the night in a stable stall and AC collecting her in the morning.

Thankfully other than a couple of unrelated cows breaking in recently, we haven’t had further issues.  Our next nearest neighbor though has not been so lucky.  The sheep pretty much destroyed their garden and grape vines.  Then after the owner of the livestock sold off the sheep he bought goats and the goats did the same thing–only they have yet to appear on our land.  Perhaps the mule, who still lives there, clued them in on what happens to livestock that enter our gates…..sheep go in but don’t come out!