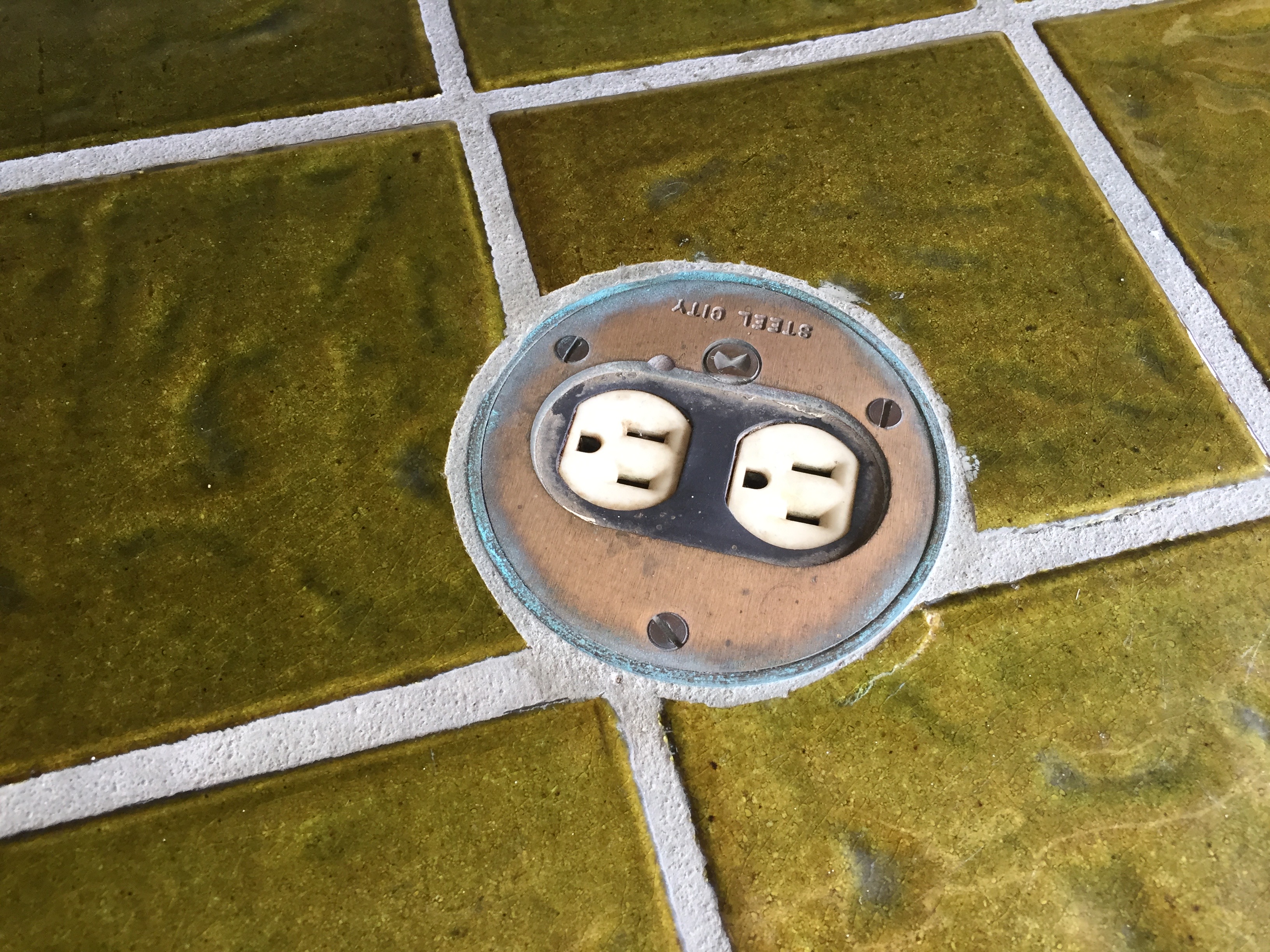 Agent Smith posted a while back about the monument outlets inside and outside the great room and what a mess they were.  Three of the ones in the great room were missing covers, at least one had had a fire within it, and back when we had the main electrical panel redone we had the electricians decommission them to just kill that risk factor right off.

Well since a few were missing covers they looked pretty awful, but getting new covers for them was not exactly cost effective.  A new SteelCity/Thomas & Betts brass floor monument cover costs between $100 and $250 from Graybar depending on if you go for plug, lamp or outlet.  That would have been anywhere from $300 to $750 to provide a primarily cosmetic fix for the great room–not super economical.  Then I started scouring Ebay regularly in hopes some cheaper options might turn up.  We got super lucky and about a month after starting the search I came across someone selling the lamp covers for just $14 a pop.  Added bonus, while they’re still “new” and unwrapped, they appeared to have been manufactured some time ago and looked a bit tarnished.

I bought three and once they arrived we were delighted.  Not only are they pre-tarnished and thus fit in perfectly with the existing covers we didn’t have to replace, even the screws were aged a bit.

It worked out so well, when writing this post I popped over to eBay to see if the guy who was selling the covers still had any in stock and he does–according to the ebay listing he’s only made that one sale of three to us.  So since we’re so happy with the finished result we just picked up two more to replace the two we didn’t touch back in January/February when this mini-project occurred.

Obviously based on the fact that this project happened in January/February and this post isn’t going to be published until sometime in July (although it was written in June) we are facing a bit of a backlog on getting project stories out there.  This issue is due to one part procrastination, one part digital assets management tool migration issues, and one part general insanity of life here at Purgatory.  The good news though is that now that the wall saga is put to bed, there are no more giant story arcs to cover and most projects can be covered in just one, or in cases like the upcoming pool remodel, a handful of posts.

Then there are of course the dozen or so posts that were started and then abandoned in the last year or so, and since I’ve digressed from the topic already, I will include the snippet of one here.  I forget why exactly this was written, but it does some up how very different life halfway up a mountain is from living in a city or even the actual suburbs.

We moved to Purgatory from San Francisco where we had spent over 7 years in a nice enough house located on Potrero Hill.  The house had one proper bedroom, two office-sized rooms, a four car garage and a back garden that was about twice as big as the normal SF back yard.  The house here at Purgatory is a bit bigger. As for our backyard–we don’t really have one as there is no “back” to our house.  As for a size comparison, the fact that our old back yard would in the swimming pool pretty much says it all.  (Another scale comparison: it is a longer walk from my office to the wine closet than it was from my old office to the corner liquor store.)

There are definite advantages to the additional space though as we finally have a proper guest room and guest bathroom (guests no longer have to sleep on an inflatable mattress in the living room or dining room), the boys have their own space just outside my office (which helps minimize the amount of dust and random bits of food that end up in my workspace), the giant garage has become a hub for Lemons car activities, plus there is the abundance of wildlife, the pool, hot tub, potential garden and orchard space, our own hiking area and the ability to just pop outside and fly a small RC plane about practicing some aerobatics without worrying about damaging property.   Plus there are the views.  From every window of the house there is something wonderful to see.

Perhaps the one facet that was not a selling point to our decision was the view, yet now it’s something we really enjoy and value. We did not set out searching for properties with a 270 degree+ views of Silicon Valley–we intended to buy a very large garage and pool with an attached house that didn’t need to be set on fire and rebuilt.    When after close to 2 years of looking we found this place it ticked the right boxes and the view was an afterthought.    Now almost 2 years after moving in the fact that every window presents us with a different view:  whether it’s the wildlife outside my office, the valley floor and downtown San Jose or the surrounding homes on the hillsides (and occasional fires) is a fairly awesome thing.