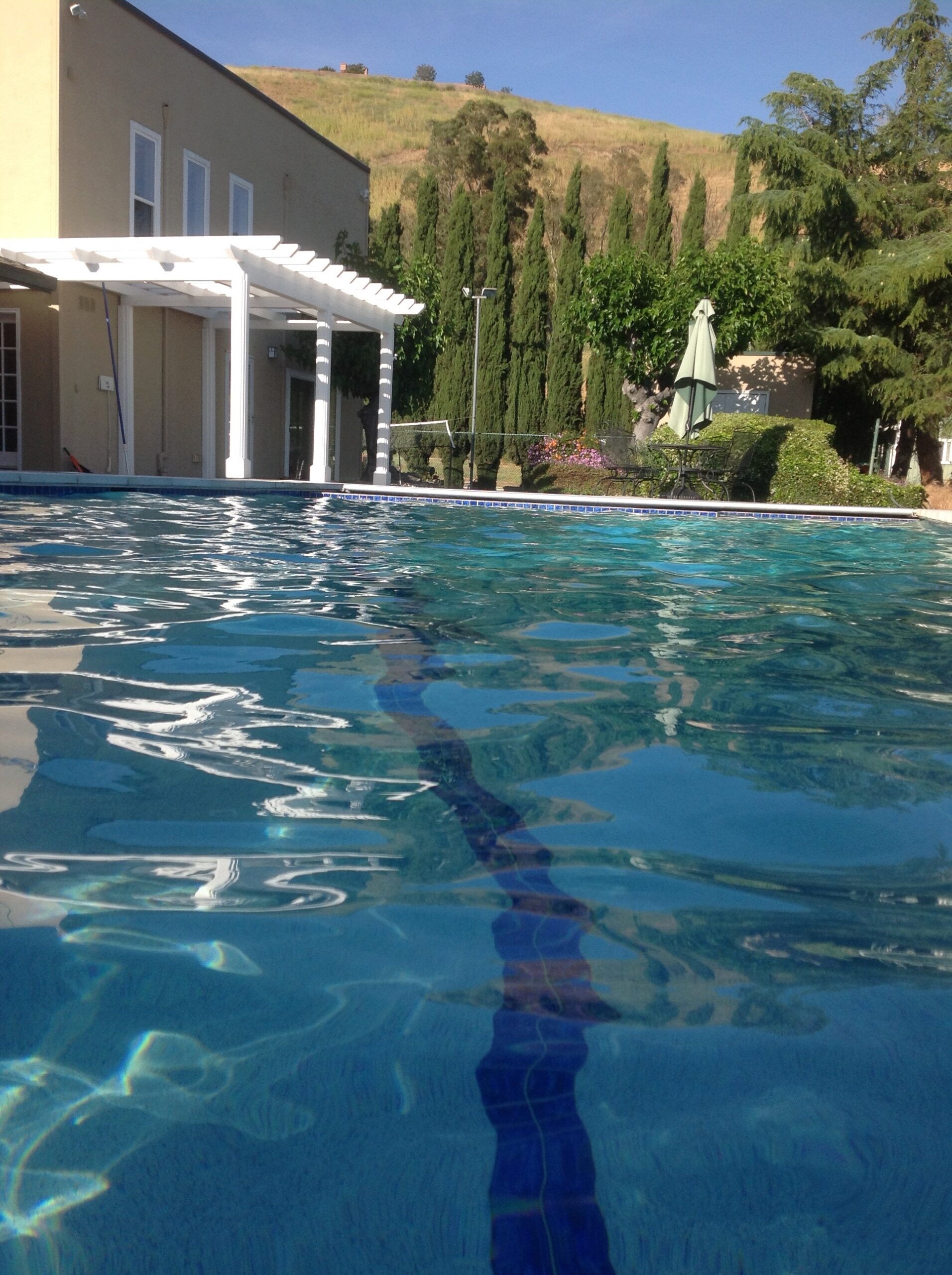 Because of a few delays we had to wait a day for the water trucks to fill the pool.  We decided at the start of the project that we would not be filling from our well but would instead pay to have water brought to us and pumped into the waiting pool. Of course we had a bit of rain in the day between finishing and filling, so we had a wee bit of a head start.

Based on the dimensions of the pool and basic math we thought the pool held about 44,000 gallons of water.  This was the estimate we gave to Bay Area Water Trucks and since one of their trucks holds 4000 gallons of water we expected it would take 11 loads to fill the pool.

So when a truck arrived promptly on Thursday May 25th the driver was ready for a full day of shuttling water up the hill.  It turns out just one driver did the whole fill-up as after each load he’d head back down to a city hydrant, hook up his meter and fill up.  Then he’d drive back to Purgatory and unload.  Thankfully he didn’t need a long hose run since access to the pool is just a short walk off the main courtyard. The driver was very experienced at filling pools and he taped an old pillow case to the end of hose after suspending it with rope.  This made sure even at the lowest pump setting the water wouldn’t damage the new finish. The first load was the slowest part of the filling process as he didn’t want to really open things up until most of the deep end of the pool was covered by water and the hose was floating freely.

A few truck loads into the process and we soon came to the realization that the pool holds significantly less water than basic math had led us to believe.  Instead of 44K gallons, in the end we filled it with just 35,000 gallons of water. Still a lot of water and still a very big pool, but almost a 1/4 less than we anticipated and thus we got it filled with just 9 loads of water–coming up fully loaded was not an issue as these sort of trucks are what help fight fires in the mountains. We then had to turn on the pump to start circulating and getting chlorine in the water.  Our regular pool people were booked up, so we learned how to do it ourselves–including servicing some of the equipment and learning how to startup the chemicalization.

After we got things circulating, a technician from Pool Covers Inc came out and reinstalled the cover rails and sorted out the rest of the cover apparatus–we didn’t remove the cover from the channel during the resurfacing like we had to do when we had the balcony tile replaced last last year, but instead just left the cover rolled up in its channel.  A few days after the cover was back on, a crew from Sea Bright Solar came out to check over the solar panels they had installed almost two years earlier and make sure everything was good to fire up.  Fire up we did–a heat wave meant the pool went from 72 degrees to over 90 in just a couple of days. We backed off the solar and the pool is now at a lovely 84-86.

And then just like that we were done, and not since the septic tank project nearly two years ago has a major project gone so smoothly.  The choice to go with Adams paid off and we’re happy that not only is the project done, but it was completed within budget with just a few unavoidable delays–best of all the pool looks awesome. Sure there were a few hiccups: what with finding out the main drain never actually worked properly since it had been blocked up by the POs sometime before we bought the place; and then there was the matter of a small disaster in the studio building once again caused by the stupidity of the POs and while that issue was tangential to the resurfacing project, it will get covered in a post or two later once the “solution” is completed.

We  came across two little pencil sketches the tile crew had done on the coping to explain to one another how the * across the bottom should go.  Since these will fade away soon I made sure to get pics of them. And finally here’s a vid of opening/closing the pool with some stroke action in between.