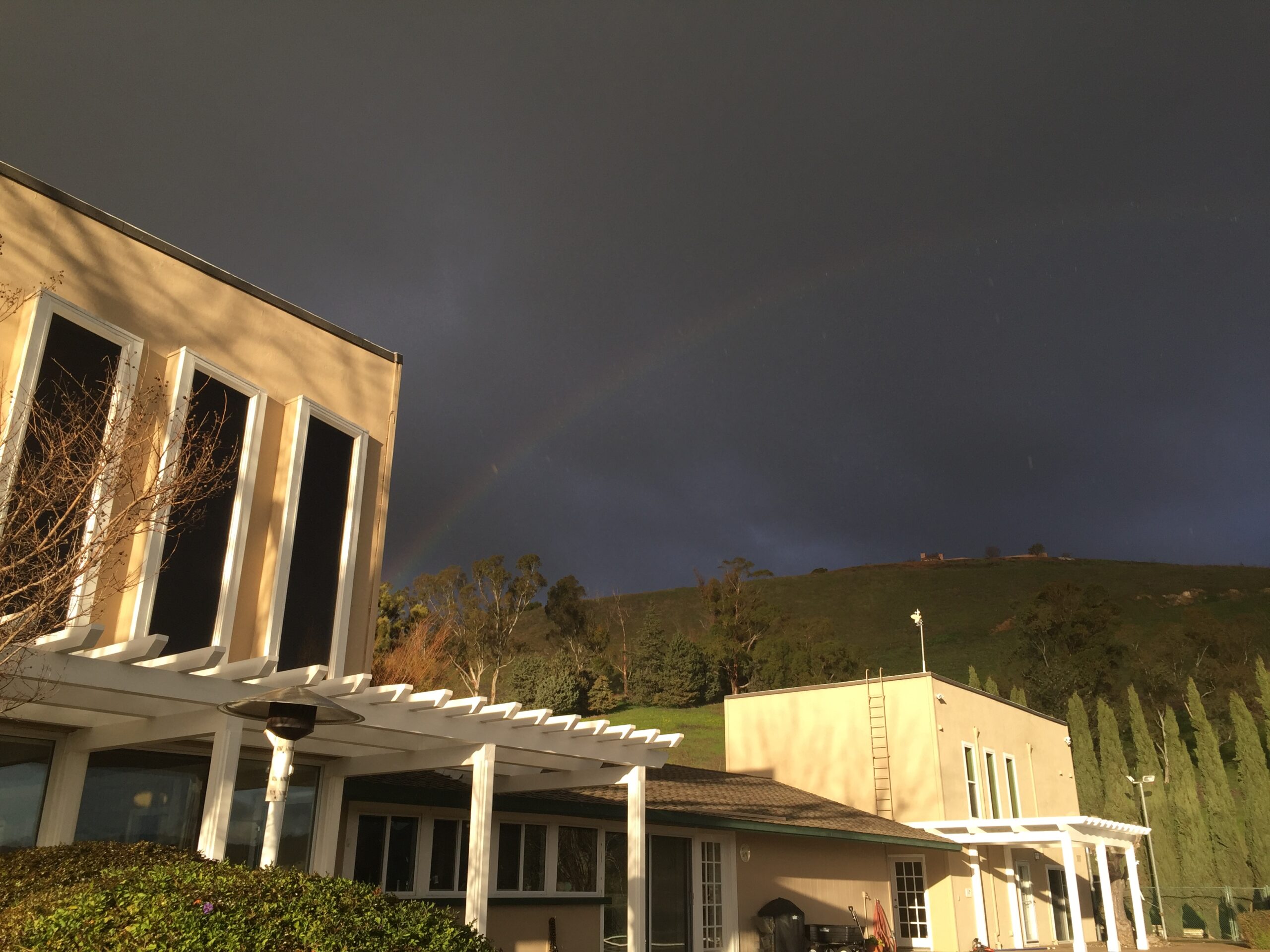 So there we were, without water and with a dirt driveway.  The crew returned with an excavator the next day and got busy.   They dug a trench from out behind the garage, along the north wall of the garage and then across the courtyard.

And let’s be clear here:  this was not the fault of the crew repaving the driveway.  Just as we had no idea the water line was not buried a safe depth nor did they.  It was just one of those crazy things that was either the result of the Doc saving money or the POs doing things badly, and while the pipe that was damaged could have been repaired, we had no idea what the condition the rest of the run was in and by the time the pipe reached the house it was only under an inch or so of dirt.  Thus it was in our best interest to lay a new run and a proper depth so that once everything was put back together we could rest easier.

As many things here do, getting water restored to the house took longer than expected.  A full three days passed before we had running water–they worked through Saturday to make that happen.  This meant, because our toilets used Flushmate units to provide more pressure for flushing we couldn’t even flush the toilets–because we’re on a well our water pressure is only around 47PSI.  Needless to say it was this time I was very grateful we received a complimentary pack of Unicorn Gold from the makers of Squatty Potty.

Service was restored though as they ended up replacing the old connection seen here on the left with a new setup.

They weren’t happy with the seal though so they returned that next Monday to tighten things up.

Then it was a matter of filling the trench they had made.  Of course when they were working close to the new inlet they managed to catch it and rupture the seal so we spent one extra day without water but at this point we could manage well enough as we did after all have clean toilets.

Once the water was restored we moved on to the second issue the courtyard demolition had revealed.  Namely that either when the courtyard lights were installed or when the POs put down the old asphalt that we had just removed, the wiring for these lights was done in a particularly sketchy manner.  Namely there was just conduit run along the footer board at the edge of the driveway that daisychained the lights together.

So it was time to make another trench and bury some conduit. We planned ahead though and had them bury an additional pipe beneath the driveway along with the smaller grey one you can see in the photo below.  Since we needed the grey pipe to get across to the far light, it made sense to add this extra conduit which be used at a later date should we decide we need to run power or something else over to that area.

Shortly after all the trenches were covered up it started to rain and it just didn’t stop.  For close to a month it did nothing but rain.

And this was the result.

The brown mass in the image just above…it’s water.  About four inches of water.  Needless to say it was an interesting time to be here at Purgatory.  An interesting and very muddy time.

My sexy new boots I found at Tractor Supply got quite a workout. It was survivable though and by the start of February (two weeks after the ruptured pipe) things start to improve–meaning the rains finally eased off and things dried out enough that we were able to start thinking of putting down the news asphalt.

The only truly annoying part of this tale is the fact that because removing the asphalt meant creating a large drop in height from the concrete pad the garage sits on down to the mud.

This meant that for several weeks we were unable to get either the 911 or the M Coupe out to drive and relied solely on Barbie, our Ford 150.  Thankfully Agent Smith usually catches a corporate bus to the office now as he can just zip down the hill on the scooter, so were able to manage even that.  The only down side is that both cars sat for so long without being driven that both batteries went flat.  They have mostly recovered thanks to the acquisition of some battery tenders but my little BMW still needs a little TLC for it to be fully recovered.