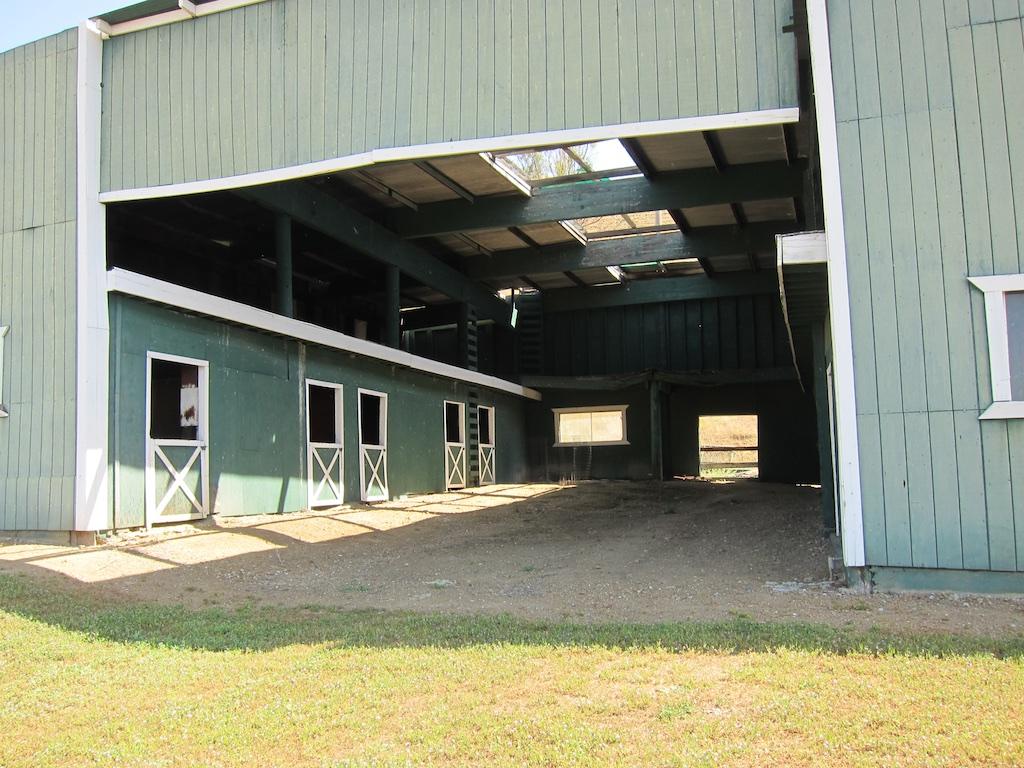 We’ve mentioned a few times that we have a very large pole barn that dates back to around 1969.  Last week we wrote about the roof work we had done and we’ve mentioned the amount of junk that was left in the building by the previous owners.

Here for your viewing pleasure are photos of all the stuff that was inside the left side stalls and then some post-op images after they were cleaned out. Inside the left front stall we had a collection of saws and random broken things plus a bunch of random sheets of wood piled up on one side.

Here’s a shot from last April before we made an offer on the place.  Everything you see in the pic was left here but since taking possession we had slowly picked through this stall.

The metal mess is great for the house yard fence and we’ve used some of what was left in the stall and store there rest elsewhere.  Here are some shots of what was underneath that mess. The table saws can be cleaned up and used, but just about everything else went into a dumpster.

Here are before and after pics. The second stall on that side of the building housed a collection of really: doors, signs, and many large garbage cans full of offcuts of random types of wood.  It was quite a mess.

I spent half a day back in November cleaning some of the mess out, but soon realized I was going to need reinforcements to get the job done.

Then during the barn reproofing project we found some young and hungry helpers who were more than happy to help us deal with issues like this for a nominal sum of money.  So over the course of two mornings myself and two such helpers managed to empty out everything.

One of the highlights of cleaning out this stall was finding many old doors that were in the house when it was first built and later removed (most likely due to age).  We found the old pocket doors and what were probably the kitchen door and north entrance doors, as well as the two doors pictured below.  They were the original furnace closet doors, and you will note that they have proper vents in them.  This sort of sanity check is missing from the current doors as they are solid and of course, mirrored.  (Almost every closet in this house came with mirrored doors.) Sadly no sign of the old front doors ,but we did find the utility closet door.  It, unlike it’s replacement was actually meant to be on the exterior of a building.  As regular readers of this site know, we had that awful hack job replaced this past spring with a whole new frame and door.  Both are able to withstand the elements and will not rot out like their predecessor. We also found some oddities like this random piece of wood that was water damaged into almost art.  Sadly the coating of grime, spider webs and bird poop made rescuing it impossible.

And how about a random sign for a hunting preserve…no clue if Purgatory was once said preserve or if the sign came from somewhere else, but did find 6 boxes of clay pigeons in the old tack room (but more on that later.) Finally ere are some before and after shots of the stall. Next up…the back two left stalls!