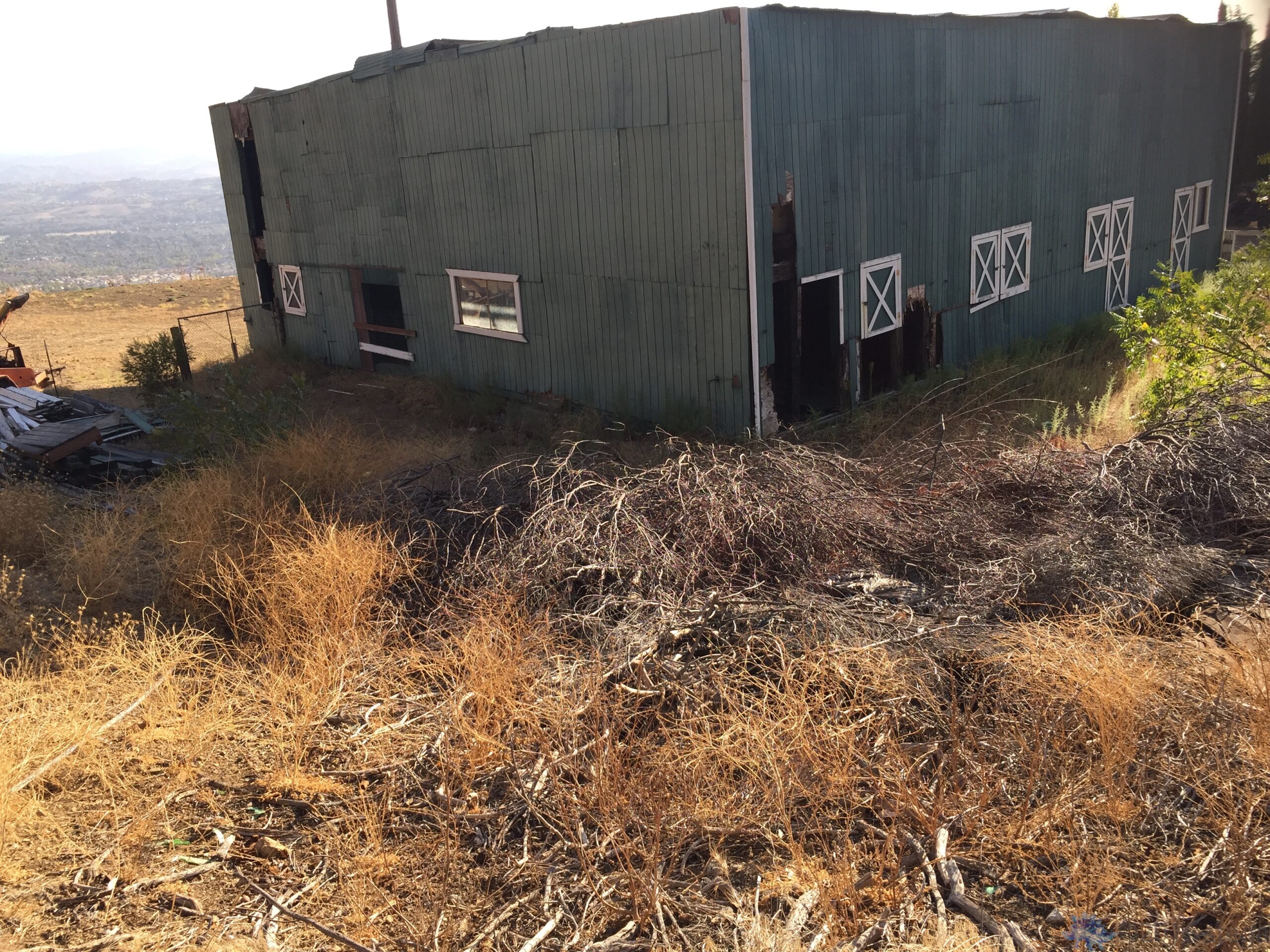 The stables finally got cleaned out thanks to the acquisition of a few dumpsters and the hiring of a few laborers.  While stalls one and two were pretty congested when we started to clean them out, nothing really prepared us for the nastiness that was to come. The third stall in was by far the most disgusting one.  Apparently the previous owners liked to hoard plastic planters like the kind you get when you buy something from a nursery.  The entire stall was chock full of them and when one opened the stable door the pots came tumbling right out.  I managed to get about a quarter of the stall cleaned out by myself last month, but with two helpers the rest of the work went very quickly.

One section of the stall has a bunch of old hay bales in it, and for now we’ve left those in place.  Perhaps the saddest thing we found during this project was the mummified corpse of a cat.  It had apparently gotten squished by the mountain of planters. We eventually got it all cleaned out and everything into the dumpster.  Here are the before and after shots. (Oh and the plastic bags we left are just full of dirt….that’s right the previous owners put dirt in plastic bags and then stored said dirt on the dirt floor of a stall.  I have no clue what their intentions were.) Thankfully the last two stalls on that side were a breeze to clean as they just had some general rubbish in them.

Some bird poop, wild mushrooms and a soda can were in the fourth stall. The far back stall has a giant hole in the back wall which from the outside really makes it look like a monster came along and tried to eat the building.

There was just some old lumber on the floor as well as yet another crushed soda can. Just like the back left stall, the back right stall was pretty empty too.  We could have kept the green fiberglass bits since that was what the stables roof was once comprised of, but in the dumpster they went to be recycled or resold. Then it was on to the last stall.  While not as awful as some of the others, everything in was completely covered in barn swallow poop.  Unlike the other stalls, it was also full of actually useful things. Stacked on an old pallet was a large quantity of slate:  the left overs from the front entry and wine room.  Plus a few tiles that match those in the great room.  We loaded it all onto the garden cart and wheeled the lot over to the courtyard.  There, with help from the pressure washer, we got everything cleaned.  Once the pieces dried, they were then all stacked neatly on a shelf in the garage where they will be safe from further guano deposits.

In addition to the tile we found this useful gadget:  a wheeled sprayer.  It too got a good cleaning plus a tune up and now it works reasonably well. Here are the before and after shots of the last stall.  Next post…the tack room and office.