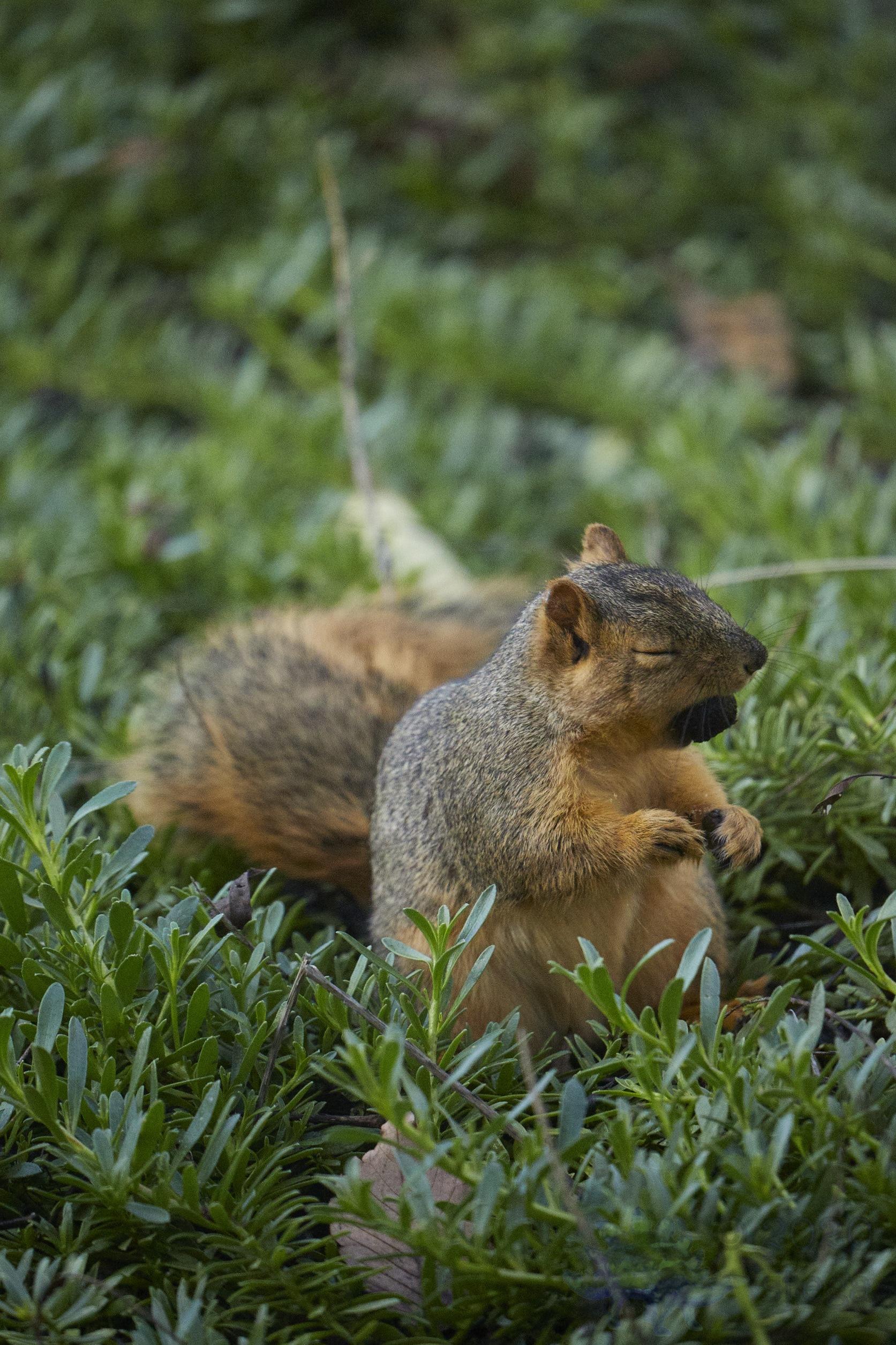 We have three species of squirrels here at the ranch. The cheeky and arboreal Fox and Grey Squirrels and the evil and destructive Ground Squirrels.

The Eastern Gray’s don’t live here, but are instead occasional visitors, mainly because our Fox Squirrel family have claimed the space as their own. We have just one family of Fox Squirrels: a single pair of adults and twice a year they produce between one to three pups. I am pretty sure their presence deters the Grey Squirrels from setting up shop, but that’s ok, because the Fox Squirrels have also become our enforcers and are more than happy to chase off any Ground Squirrels that venture near the main house. This is a good thing as those dirty little buggers (think sand-colored rats with slightly fluffy tails) are very destructive. They create underground burrows and tunnels wherever they setup shop and then in the winter rainy seasons they pull back and rats are prone to move in. This is on top of eating any pretty flowers or shrubs and woe to whoever accidentally steps into a burrow mouth and twists their ankle.

They do provide for a few interesting photographic moments though. We have managed to keep the Ground Squirrels from living near the house — aka within the house yard itself as demarcated by the house yard fence. This is basically a square with one corner lopped off as it is defined by the white house yard gate and fencing that surrounds the main house and old stables. In the image to the left, you can get a good idea of that area. Making Ground Squirrels stay away has mainly been the work of Agent Smith and his handy 22 caliber pellet gun. Yep, that’s right, we kill ground squirrels, BUT, and this is a big but, we now rarely have to do so. It seems the rodents are fairly smart and understand where they are not welcome. As a result in the last few years, only a handful have had to be removed from service. Many readers will now probably be aghast and think badly of us, but if you haven’t had a Ground Squirrel burrow near your house’s foundation, you simply cannot judge us. Trust me as I have had to deal with the ratty-results and it is not pleasant. The best example I can give is the time a snap trap in the crawl space under the house was triggered and took off the leg of a rat. There was blood everywhere and we couldn’t actually find the rat, but two days later we could smell its rotting corpse….. Thus Ground Squirrels are more than welcome to live elsewhere on the acreage: down in the south pasture is a happy spot for them as is out near our eastern neighbor’s skanky animal pens. We just do not want them near the house and so in that war we have reached a rather comfortable détente.

Now, the Fox Squirrels on the other hand, are more than welcome and they are very cheeky, but in a good way. While they venture into the garden areas they don’t make a mess and as drinking water is scarce here (we have three birdbaths up near the house) we just have the one family. In fact, we time any tree work so that it happens in late fall before their breeding season as we don’t want to end up with we pups that need whisked off to the local wildlife center because we disturbed their nest.

Back when I tested out some window seed feeders this one soon figured out how to score a quick meal. (We no longer use these feeders as they become bacterial-breeding-grounds way too easily.)

They are also very photogenic. Here’s a few images from over at stega.org.