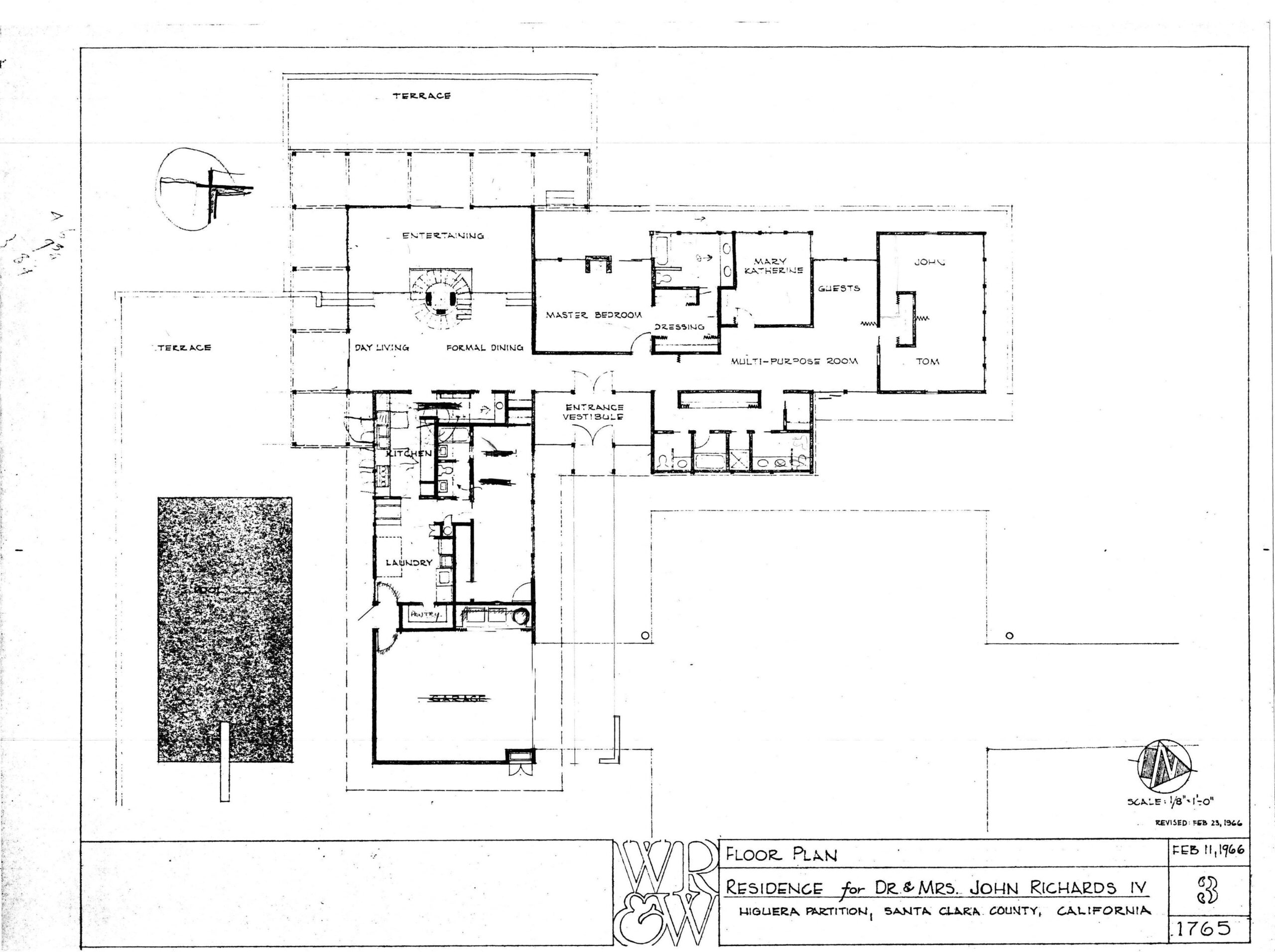 Following up from the last post…..I sent an email to the address and got a reply. It was from the eldest son who grew up in our house when the Richards Family lived here from 1967 to sometime around 1983. Pretty exciting thing.

Even more exciting, after a bit of back and forth we had set a date for him and his sister plus some of their family and friends to visit the ranch!

Cecil Speckman purchased the property in the mid 1980s and in 1988 the original attached garage was converted into a finished room.  An onsite well was bored and steel water tank installed at the north east corner in 1992 and thus water was no longer supplied from Jean’s property.    Upon Cecil’s death in 1994 — his ashes were scattered under the magnolia out front — the property transferred to his son Mike Speckman.  In the late 1990s Mike Speckman got married.  While the Speckmans neglected much of the outlying property, in 1999 they did construct the current studio building where there was once a smaller pool cabana, and at a later date, a kids play area and the sports court were added. In 1999 they also poured a new concrete slab surrounding the pool, resurfaced the pool and altered the pool shape by removing the original steps which allowed a motorized cover to be installed. Based on past listing photos, we know that at sometime during this period they redid the kitchen to extend it into what was the mud room, and removed the built-in planters in the foyer.

In 2012-2013 the Speckman’s attempted to sell the property. When it failed to sell they took out a small mortgage and redid the kitchen and bathrooms.  This meant the original two half-baths, shower, and tub rooms became one half-bath and one large, ugly bathroom for their now teenage daughter.  (We have plans to reduce the monstrously large bathroom’s size and reclaim the space between the two bathrooms.)  We know from satellite images that during this time the Speckmans also demolished a small horse shelter in the west field, and via old listing photos, that they removed the floating fireplace from the master bedroom.  The one good thing the Speckmans did do was install an array of solar panels in the south pasture.  We also know that some during the 20+ years they lived here someone tried to run some sort of boutique, as we pulled a bunch of garment racks and other paraphernalia out of the barn as well as several bins of brass knick-knacks.

Mike and I purchased the property in June 2015.  We had been living in San Francisco  and had spent two years looking for a large garage and pool with a house that did not need set on fire to be habitable.  While the house had a few issues, they were pretty much cosmetic and we have addressed most of them.

Since purchase the property the following work has been completed:

Demolished all the rotting decks (north side, outside the master bedroom, near the pool and lookout area

Filled in the pit Doc Richards said he cut in order to create the rodeo ring and lower terrace.  This stabilized the hillside.

The Speckmans allowed livestock to overgraze the land and our first spring we had nothing but thistle and mustard grass.  We now are at about 75% native grasses.

Renovated the studio building due to a flooding incident—let’s just say the Speckmans had a lot of really dumb ideas and the flood was because of one such.

Cleaned out the barn of all the garbage the Speckmans left.  This included the original bathroom vanities, many old doors and about 500 plastic plant containers.

Cleaned out the area to the left of the stables.  When we moved in the entire area was filled with rubbish.

The main water line to the house from behind garage to house was replaced after it was crushed during driveway repaving.  It is now at proper depth.  Electrical to courtyard lights also replaced at that time.

The septic tank baffle wall had failed as the Speckmans had installed a new concrete tank in 1999 but then built a deck over it and never pumped it.  The tank was replaced right after we moved in and now the area above it is a garden that services hundreds of birds.

The old fig tree suffered greatly at the Speckman’s hands.  They poured concrete down several cavities which weakened it and this past winter it could not withstand the 90mph+ winds we had during a storm.  Rather than haul it away, its remains now serves as the end border of the north garden.

Gutters were added to help drain water away from the house foundation.

The tar paper roofs of the great room, foyer and studio building were removed and replaced with foam roofs

The ladders used to access the roof of the great room and studio building were replaced with proper steel cage ladders that provide safer access.

Inside the house:
Most of the rooms have had some simple work done—mainly just painting the spaces something other than tan/puke-brown.  We know this was a recent change made by the Speckmans, as the 2012-2013 listing photos show most of the rooms were painted white.

The north bedroom (originally the Richards boys’ room) had been used by the Speckmans as a family room/office.  It is now my office and is lovely rose colors.

The north hall area, including the built in cabinets and drawers, is now a lovely off-white. (The cabinet drawer faces and doors are a perky green.)

The north hall alcove area is a bright yellow with two hand painted trees framing it and a cheery curtain to draw across the space as two (usually) sweet parrots inhabit the space.

The smallest bedroom (the one with the built in cabinets) was a dark purple when we moved in, but now it is a pretty blue and we added a custom Murphy bed and desk unit that compliment the original cabinetry.

We are currently planning out changes to the master bedroom/closet area and bathroom.

The great room saw the most significant changes as the Speckmans had painted the wood paneling of the chimney column. This was stripped back to match the original paneling in the upper areas of the space.  The fireplace is now used for plants.

The original teak flooring was sanded and restored to a more natural finish.  The Speckmans stated that a storm had blown out the upper story windows in the great room, and we are pretty certain they failed to make sure the foyer roof drain was clear, as there was a lot of damage to the floors beneath both areas. During the refinishing project repairs were made and all the old furnace register holes were also tidied up plus the monument outlets in the upper great room were removed

All the old drain pipes were replaced

The main electrical panel/service was redone.  It was then redone a second time when the Tesla Power Wall was installed.

Things we still need to address:

The old barn needs a lot of love

New green house/garden shed is being built starting 9/29 where the Speckmans had built a shed to house their skis and golf clubs there will now be something useful!

Courtyard lights are currently being restored to their former glory

This winter a major re-landscaping/rainwater collection project will begin