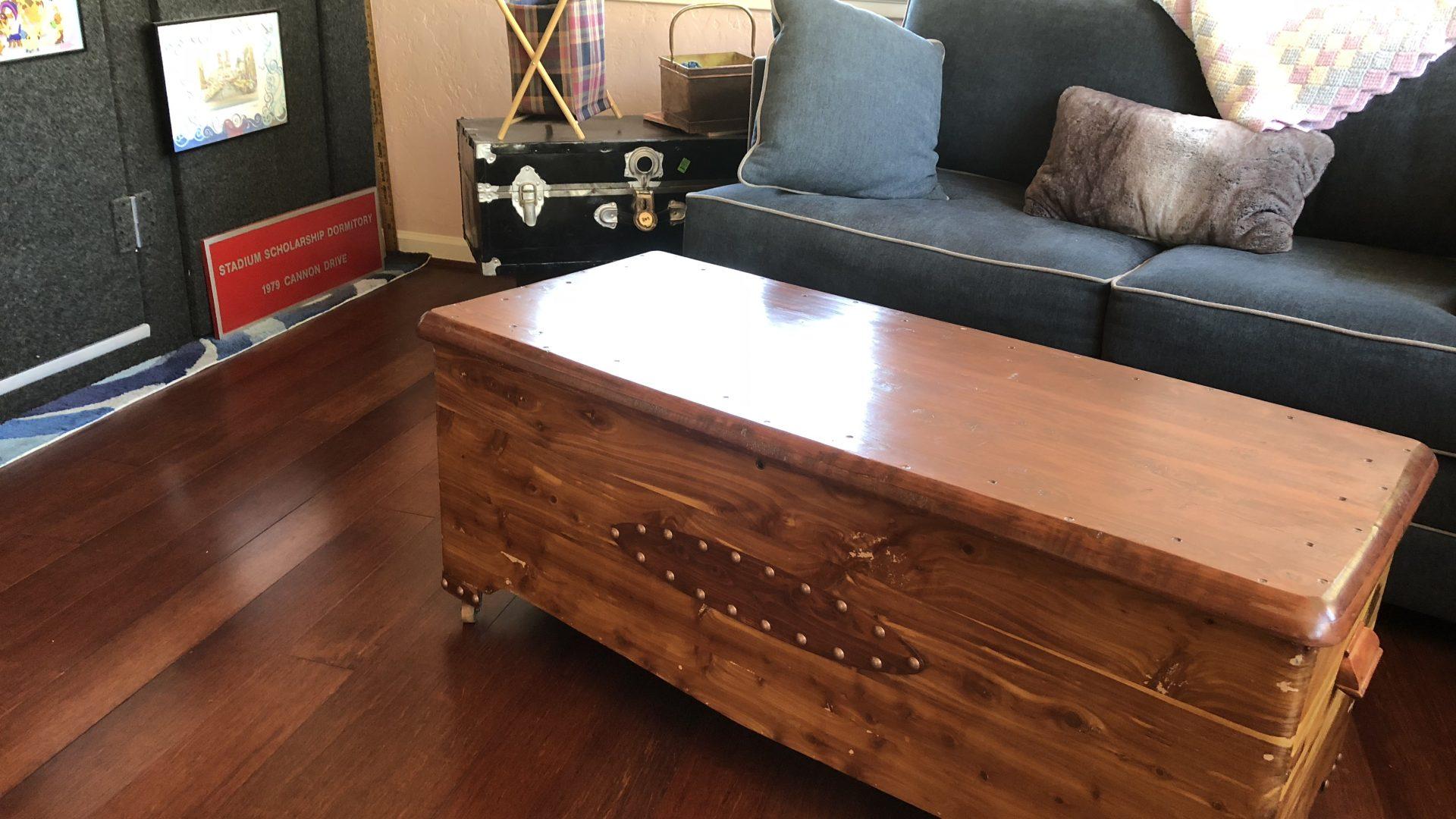 Since I’m one of only two grandchildren on my father’s side of the family, when it came time to help my grandmother move out of the house she and my grandfather had lived in for close to 50 years, I ended up with a lot of stuff.

The list includes a set of china that she picked up piece by piece each week at the grocery store with electroplated flatware to match; a funky late 60s pole lamp (that I’ve since repainted…twice;) two sets of super lovely machinist drawers (the larger of which is in my office and the smaller is in Agent Smith’s;) and of course our lovely kitchen table and three chairs that Agent Smith’s father refinished for us a few years back.

Another item I have that once belonged to my grandmother is a large cedar chest. It was up in the attic of the house my father grew up in for years. It dates back to sometime before 1940 based upon its construction and it was originally covered in rattan. (It was manufactured by the Stewart Company in Norwalk Ohio.)

Since claiming the chest as my own and moving out to California it had been wrapped under a protective covering of fabric with a cushion fashioned to wrap over the the top of it.

At our last place in SF it actually resided inside a closet, but once we moved here I figured it was finally time to maybe do something with it. So it sat in the great room awaiting that “something”.

Well the third time Agent Smith’s father visited us (back in 2017) he started work on making it sound AND pretty.

Turns out the 80+ years take a toll on furniture. Go figure…. Thus Agent Smith’s dad had a tough time getting the lid back into “ready for closeup” shape.

When he visited again in 2018 he then refinished the chest body. It too required a lot of love and fussing.

First he had to remove all the rattan, which was apparently attached with actual hide (aka horse) glue.

Then there was much fiddling to get everything sanded and aligned properly. Plus some of the base/feet sections needed to be rebuilt, and I had to order new wooden casters since the original ones were broken or had simply gone missing a few decades ago.

Above are shots of it after it was tidied up.

Once he was all with the gluing and sanding portion of the project, the chest moved into the downstairs area of the great room for the last bit of work.

The top was rejoined with the body and the body was then stained to match it.

Plus we found some upholstery tacks online to replace the original ones, as most of those were missing or damaged. When all the work was completed, the chest was moved into my office where it is now used daily.

And I mean daily, as I often sit on the couch in my office with a laptop, and the chest it serves as both a coffee table and storage. Plus it looks, I must say, rather smashing.