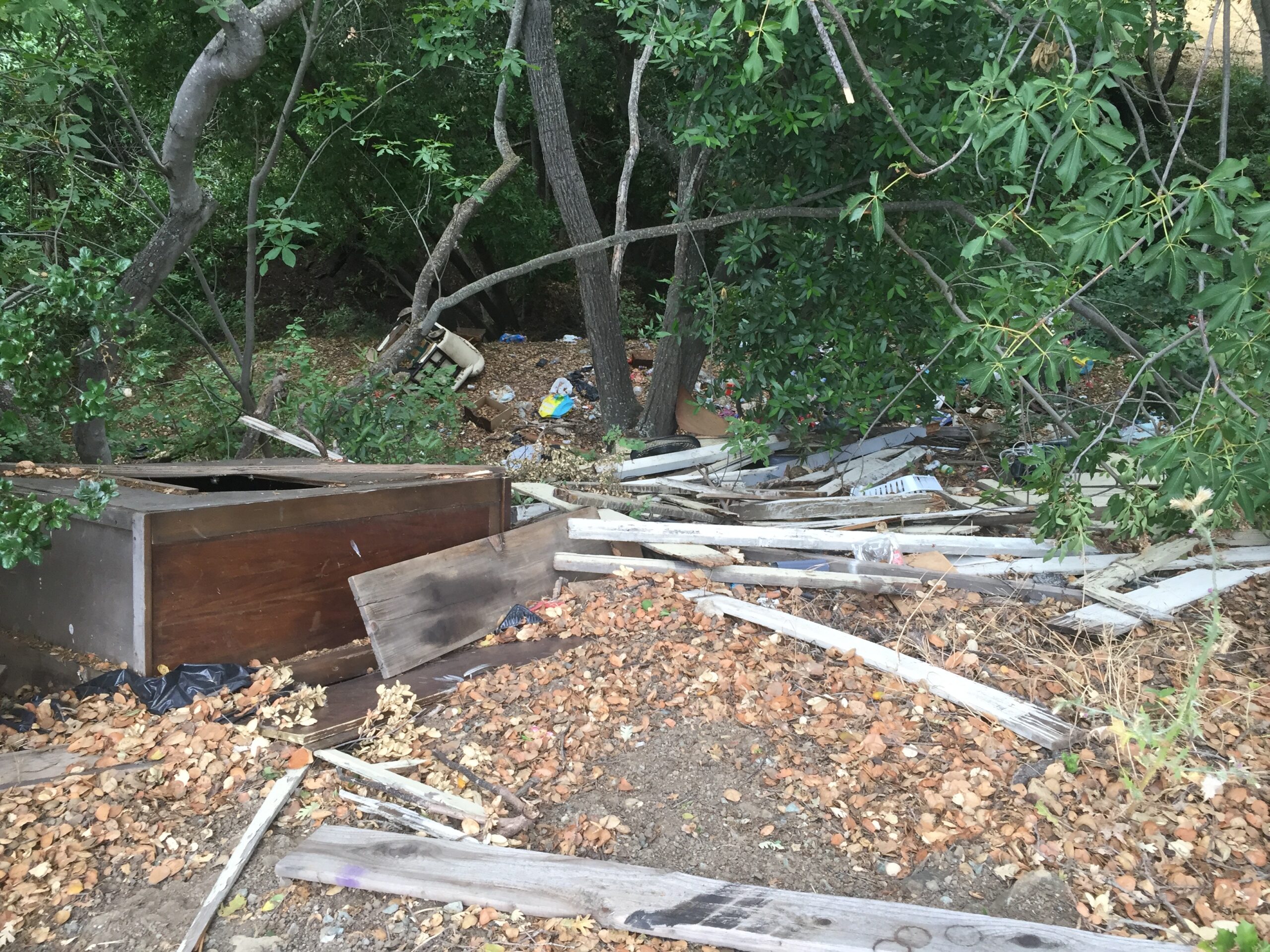 Illegal dumping is an issue up here.  A lot of rude people from the flatter areas drive up here late at night to dump their rubbish.  The worst culprits are landlords who just cleaned out a unit and don’t want to be responsible and take the garbage to a dump and pay a fee to have it properly dealt with. A few months ago, an area of the road we live off which already had a enough garbage dumped across that it that the mess was visible on Google Maps, got another load of stinky trash (including some mattresses and couches.) This particular section of road runs along an active creek that is about 30 or 40 feet below the level of the road.

Just before that load of garbage appeared a separate gathering of garbage bags showed up about 300 yards away on another section of road, and while residents reported both messes when they appeared we were totally unsuccessful in getting county’s assistance cleaning up the messes.  Santa Clara County is currently trying to get its act together to better assist residents with issues such as this, but they have to wrangle several departments into the mix, and anyone who has worked in a complex bureaucracy or large corporation can tell you that coordinating between all the mini-fiefdoms involved in such a project is like herding a herd sheep and goats and cows combined.  Adding to the confusion is the fact that our road is a private one meaning it is not administered or maintained by the county, so while sometimes our requests for assistance have been handled, more often than not they are refused. So, after nothing from county in the last few months, over the course of two weekends I organized an event in which 20 residents showed up end we managed to remove everything. And I mean _everything_ Bags of garbage, boxes of rotting paperwork, old mattresses, a plastic children’s play set, armchairs, couches, old dressers, broken TVs, refrigerators and other appliances–it all came out. Now this was the 14th dumpster I’ve ordered in the last two years from Ecobox.  When I called to arrange pickup (they knew prior that this dumpster was for the neighborhood cleanup and not for the random bits of garbage the previous owners of our property had let accumulate over 40 years,) I was honest and explained we had fished out several mattresses and couches from the mess and that those were in the dumpster.  Thankfully the manager was very understanding of the nature of the cleanup and since I’m a very good customer he refrained from charging extra to handle final disposal of those items.  Normally we just have wood and metal with the occasional old bathroom vanity (there were two in one of the stable stalls we cleaned out last year) or bit of concrete still stuck around a post we pulled out, so obviously this load of total junk was quite different from all our past topped up dumpsters.

Going forward I’m proposing to county that they could duplicate this idea and setup a small program to help residents with the cost of the dumpster and simple supplies like heavy duty garbage bags.  Thus more “neighborhood” groups might be willing to do this sort of thing in affected areas.  The organizer would then provide receipts, a list of names of who attended and visual documentation of what was done.  Then county would reimburse the most of if not all of the cost. That idea is a long way off and right now our little group of neighbors (there are just 45 or so houses on our road and half of them are below the area we just cleaned up and thus wouldn’t know of it unless they drove up here.)

Before and After Shots: And one last note, our new little tracked dump truck, Dumpy McDumpface proved incredibly useful the second weekend.  The first Sunday folks concentrated on all the garbage nearest the road and while that did involve getting down a somewhat steep 10ft slope, ropes made it fairly easy.  The second Sunday we worked further down closer to the creek and we were about 20 feet below the level of the road and the slope was too steep to just haul things directly up to the road.  Our little mini truck was useful as I could drive it in from a level opening about 200 yards away but turning about was difficult and it couldn’t carry much, so the second Sunday I drove Dumpy down, and in just a half a dozen trips back and forth between the area with the garbage back  to the more level access point, we got everything up and out.  Then a couple of waiting pickup trucks (one with a trailer) ferried the junk the mile or so to our waiting dumpster.

The only difficult part was that Dumpy doesn’t move very fast up hill and with just two relatively flat sections between the cleanup site and Purgatory, getting home was a slow crawl most of the time.  A very slow and shaky crawl as it was first gear up the steeper inclines and Dumpy on asphalt is a very jittery beast.

Footnote:  amazing the progress we’ve made in a year on the getting to know the neighbors though.