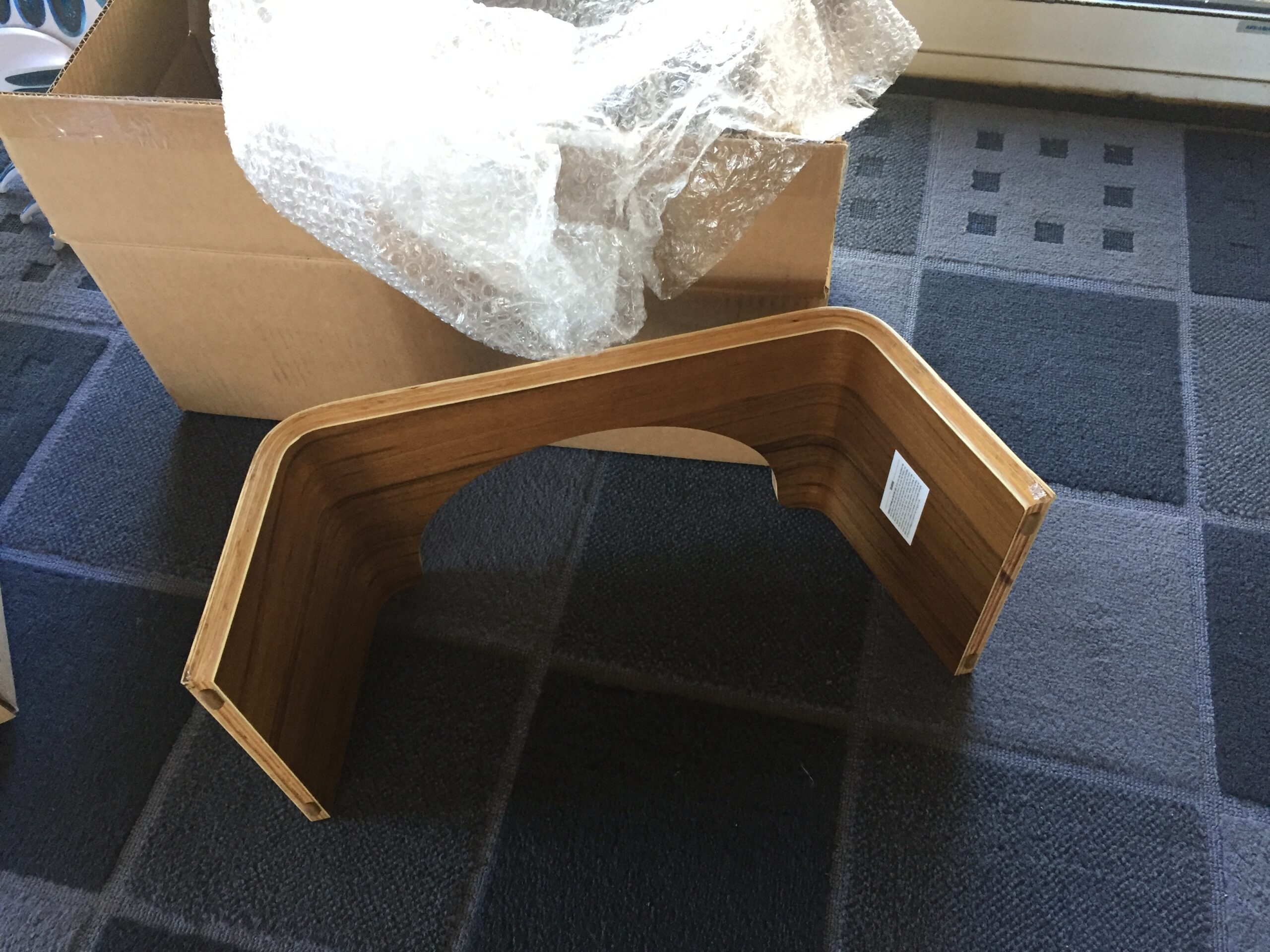 The photo to the left is of a damaged Squatty Potty that we ordered last winter.  I decided to try out their product as I’m short and a lot of short people rave about them.  Sadly the first one that arrived was slightly damaged (it wobbles ever so slightly as a result,) so I contacted the manufacturer and sent them pictures.  They said not to worry they’d ship me out a new one no charge.

So I waited.  Then a extra tall white plastic one arrived and the packing slip said it was ordered through Home Depot and was meant for someone in New Jersey.  Confused by this, I again contacted the manufacturer and they were puzzle by what had happened but said not to worry and they’d try again.

Soon enough a third one arrived and it was an undamaged bamboo plus the makers of Squatty Potty had tossed in a full set of their Unicorn Gold spray.  The stuff is meant to mask/eliminate odors when you use the toilet bowl. (And it really does work by the way.)  Not only did they send me the free pack of spray but they told me to just keep both the damaged unit and the mis-sent unit.  Since we don’t need three, I re-gifted the white plastic one and put the wobbly one in the guest bath.

But we weren’t done there.  We then hit up BidetKing.com.  A totally awesome site devoted entirely to your toilet needs.  Agent Smith has always wanted a bidet toilet but we weren’t keen on buying a completely new toilet and going through the install process.   Enter bidet toilet seats.  These things are truly awesome as you simply swap your normal seat for one, hook up a hose to your cistern fill valve and plug in to a standard electrical outlet.

And now for a bit of TMI: never having regularly used a bidet I was a tad skeptical, but after 6 months with one, I could not imagine living in a house that didn’t have such a feature. Cleaning is so much easier than just the usual method of wiping with toilet paper, and while we still use toilet paper to dry, the amount pales in comparison to the “old ways”.  This is great news as we are on a septic tank and leech field setup for our sewer needs, so the more non-biological components that we can keep out of the system the better

Plus our drain plumbing is kind of a mess as we have a lot of 90 degree turns, so anything we can do to simplify what we flush minimizes the likelihood of clogged pipes.  Here’s a diagram of what I mean– the green Iines are the drain pipes and the egress is at the bottom of the image. We decided to install these new goodies in what we call the powder room bath.  It’s a half-bath located near the front door.  In the above drawing it’s dead center. And for those interested, we went with a Kohler Novita BH-90/93.  Now all the remains is to eventually paint the room something other than puke brown.