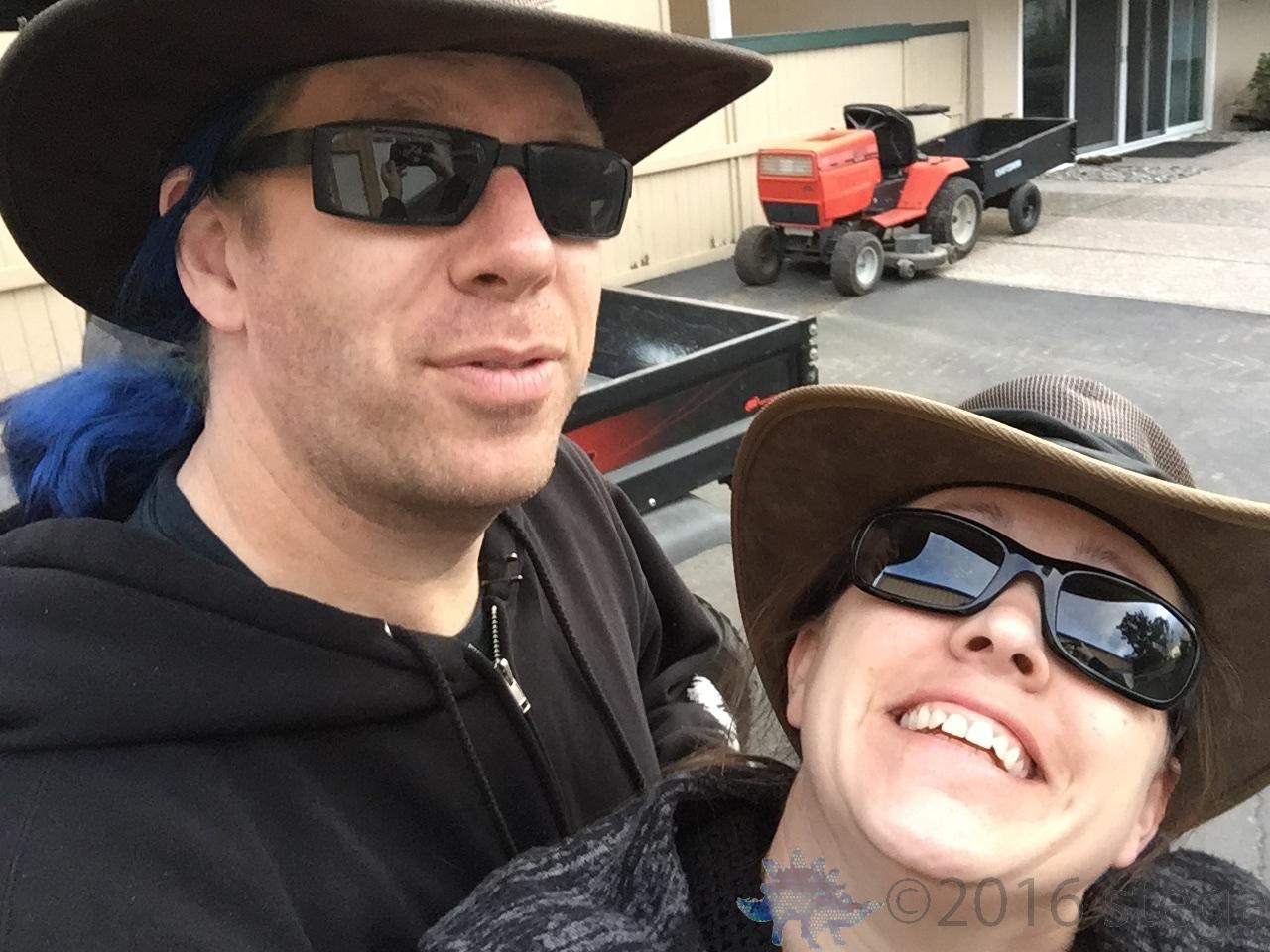 One of the things we did not have during the 8 odd years we lived in San Francisco was an actual spare room in which guests could sleep.  There was just our couch or an inflatable mattress set down in the dining room.  Here at Purgatory we have not one, but two such rooms plus a second separate building that can be used in a pinch for guests.

Thus, since moving in, we have been graced by visits from several notable dignitaries.

For example, last September Agent Smith’s father arrived for just shy of a month and made good use of the “guest suite”.  He assisted with fence repairs and the demolitions of the small horse structure and old dog kennel. He and Agent Smith also worked to rebuild some of the fencing surrounding the house yard while he was here.  The end result was that we completely filled a 30 cu yd dumpster–the first of many.

Agent Smith’s father will be visiting us again this September and we hope to put him to work again.

In addition to him, later that fall a group of neighbors from the Potrero Hill (that’s where we lived in SF) came down for a lovely lunch and guided tour.

Then in January my parents were out from Ohio for a week, and they too made use of the guest suite during their stay.  They drove up from L.A. as they spent a week in that area visiting customers and networking while doing a bit of sightseeing.  One of the highlights of their visit with us was a trip down to Santa Cruz and a meal at Gabriella Cafe.  We had been there together years ago, so it was a fun thing to revisit together.

Since then we have had quite a lot of visitors and we now find ourselves entertaining much more often then we did when we lived in San Francisco.  Friends from Zurich have overnighted with us, friends from my days as a network engineer came over for a lovely dinner where we made use of the pool, grill and patio furniture.  Lastly the BDR guys are often here on weekends to work on the race cars, and sometimes when the work goes into the early morning hours one of them will make use of the guest facilities here.

Three very noteworthy visits occurred this summer.  In late May L&R, friends from Ohio, visited us for a week and we went to Fanime and Clockwork Alchemy. We also made a trip up to SF to visit the newly remolded San Francisco Museum of Modern Art as well as a few trips down the hill for some light shopping and tasty sushi.

Then in early June I finally met in person someone I’d known since college.  Dork (for that is his nickname from CuSeeMe days) stopped by with his family on their way north from Monterey.  We sipped juice and chatted while Dork Jr. swam about in the pool with his dad.  They brought me some lovely artichokes that were so large the prospect of cooking and eating them myself was daunting–Agent Smith doesn’t care for artichokes.  Never fear though, as a week later more CuSeeMe friends visited and I was able to share the tasty giants with them.

Typing of giants, one of these visitors, Big J, is quite tall in person.  Here’s a shot of little Slurpee trying oh so hard to show up at the same level but not quite making it.

As you can tell, things this summer have been busy in new and exciting ways which leave us often feeling a bit awumbuk.

From the CNN article:

Awumbuk: It’s a funny thing about house guests. While they’re in your home and you’re tripping over the extra shoes and suitcases that are suddenly littered about your living room, you start dreaming about how nice it will be when they leave. Yet, after they do, your place often feels too empty. To the Baining people of Papua New Guinea, Smith writes, this feeling is so prevalent that it gets a name all to itself: awumbuk, or the feeling of “emptiness after visitors depart.” There is, luckily, a way of ridding the home of this rather melancholy feeling: Smith writes that “once their guests have left, the Baining fill a bowl with water and leave it overnight to absorb the festering air. The next day, the family rises very early and ceremonially flings the water into the trees, whereupon ordinary life resumes.” That’s one way to do it.

I have yet to try the water technique.