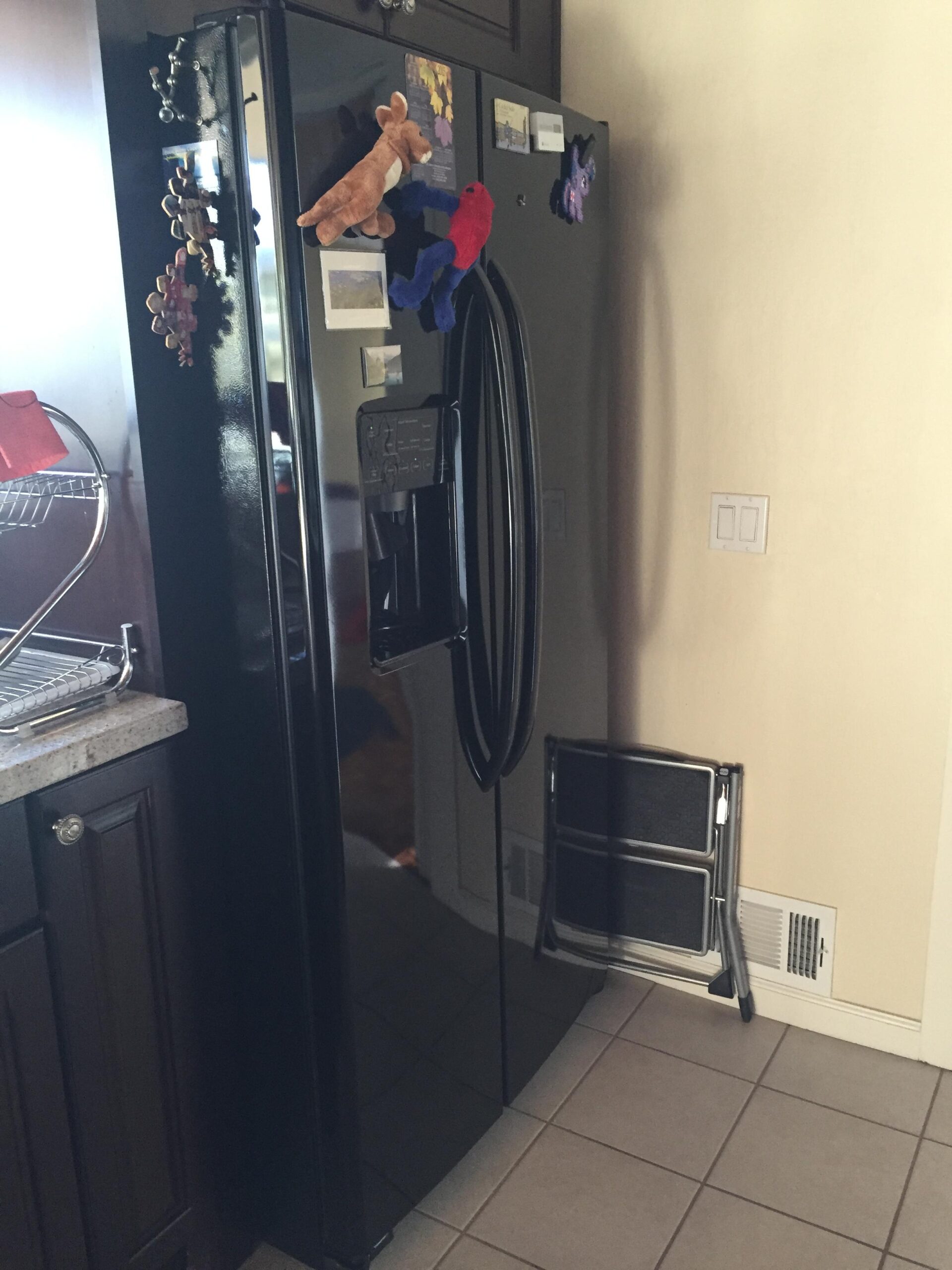 When the POs remolded the kitchen they used Lowes (I found this out thanks to another issue I’m currently chasing down.)  It seems they (the POs) just went in and said “here’s some money, update this (probably) 25-30 year old kitchen”.  As such a lot of default stuff is in our kitchen.  None of it is terrible, but like the rather meh reverse osmosis we just replaced, over time we will probably upgrade and change things to make the space more useful. Case in point, the refrigerator.  It’s a perfectly nice fridge:
a GE Profile side-by-side in black.

The problem though….the door handles are very big and because it’s a side-by-side and in a corner, you can’t actually open the fridge door completely.  This means you can’t get the drawers completely open, reaching stuff in the back is hard (let’s not talk about how much food as gone bad) and it’s just in general a thing that annoys us.

Back in July we were at a nearby Home Despot and spent serious time looking at the refrigerator offerings wondering if we should replace the GE.  While we decided to hold off, we did figure out what our “dream fridge” was:  a nice LG French Door unit.  Not only does it have smaller main handles, it is designed so that you can get the drawers open easily with the main doors at just ninety degrees. It also has an easily accessible (and thus easy to keep clean) ice/water maker, a roomy bottom freezer with sliding level sections, and best of all, a door within the door so things like milk and butter can be taken out quickly.  About the only dumb thing is that the fridge has the ability to talk to a smart phone, but being an LG fridge it will only apparently work on an android thingy.  Still, I really wouldn’t want a self-aware fridge telling me I need to eat more eggs and use up the whipped cream cheese by tomorrow.

Over the next couple of months we read some reviews of the LG and compared it to others we’d seen, and we still dreamed of it’s frosty goodness, yet we obstinately suffered through the annoyances of the GE.  Squatting and twisting to get food for the boys each morning; finding another head of lettuce that had languished forgotten and hidden in the bottom back; or trying to squirm and shuffle things about to fit in a fresh plate of lemon squares.

Then, last week, Agent Smith was at Lowes and noticed, the LG….was on sale.  So I did some research and discovered that because it’s the end of the year, appliances everywhere are on sale.  Home Despot/Lowes/Sears/even the independents…all have appliances on sale for 40% off. Just like cars at dealerships, the old models need to go so that the new ones can come in.  We had no clue appliances were on such schedule. So, Friday we put in our order and today, our new, oh so sexy fridge arrived.  The delivery guys were fast and efficient, moving the old fridge out and into the garage as it will be rehomed to a place where it will fit in, be fully functional and thus be loved greatly.  (And for those wondering why we don’t just keep it to use in the garage or pantry–we already have fridges in both those spaces that actually function very well/make use of their allotted space in a rational manner.)  They then hooked up the existing water line and moved the new guy into place.

I think the Roo and Crotch Frog (pictured hanging off the side, as the front of most stainless steel fridges–including Mr. Freeze here–aren’t magnetic) approve of the change in their venue.

Here are some action shots…The image on the left is of the quick entry door:  basically a mini fridge where we have butter, juices, milk and we’re not sure what else we’ll eventually store in that section.  The image on the right is of the fully open fridge and freezer compartments.  (You can still get to the stuff in the quick entry section but as you can see, there’s actually plastic sectionals and a pop-out door in place to help insulate the rest of the fridge from chill loss when you open that section. We’re quite happy with Mr. Freeze as Agent Smith is now calling it.  We’re also starting to ponder a possible replacement for the GE dishwasher that behaves in a more stupid than usual manner ninety percent of the time…