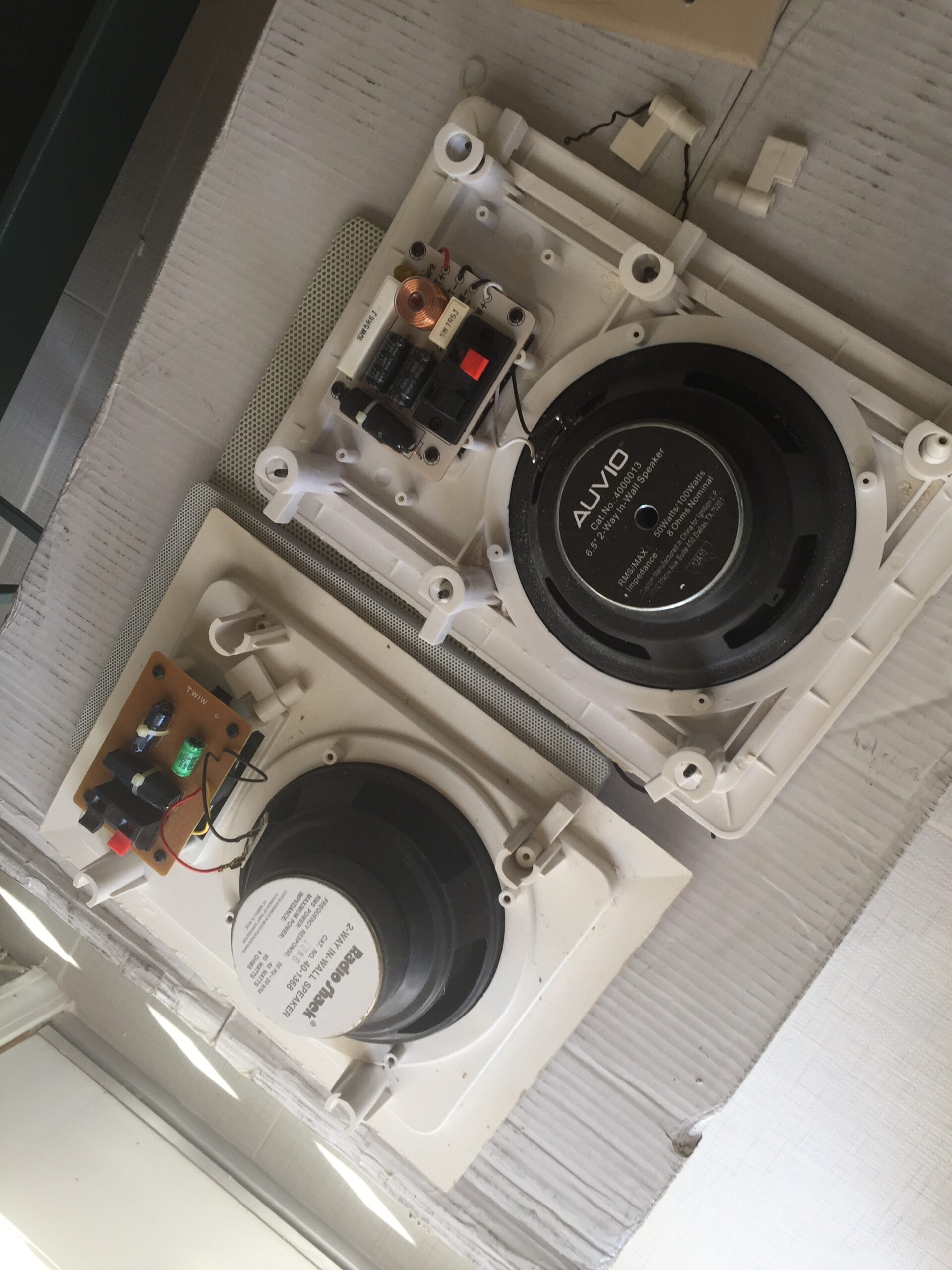 While we waited on the new windows to arrive to replace the pseudo windows the previous owners jammed into place because they were either too cheap to spend the money to have the job down properly or they were just stupid and let their contractor run amok, our contractor got busy filling holes. According to records, back in 1999 the Previous Owners took what was a simple open pool cabana  and plopped down the Studio building in its place.  The building is a hot mess that consists of three different spaces.

First there is the upstairs loft area that consists of a giant closet that contains a second walk-in closet and I’m not kidding when I say the first closet is bigger than most San Francisco kitchens.  The POs used it for extra clothing storage and apparently, according to a friend of mine who worked in law enforcement, the closet within the closet is simple panic room.  I’m thinking of converting it into a second sound booth….  As for the rest of the loft space the POs had a couple of arm chairs up there and their rather scanty selection of reading materials. Directly below the loft space there’s the small downstairs room which can be entered via the French doors near the pool equipment.  (Last year we had the door frame rebuilt so prevent it rotting out.)

The room has a giant closet across one wall and a door into the little wine room.  This space was used by the POs for a two seat couch across from TV #10 which was used solely for video games — remember they had 12 TVs scattered about the house.  In the pic above you can just make out the built in speakers and dangling wires on the brown wall to the left of the doorway/giant spiral staircase.  That is where TV #10 once lived.  When we moved in all that remained was a large bracket that the TV once hung from. Well here’s a shot of all the patching that was done to remove the conduit holes and speakers. That teeny, little room had so many holes that had to be cleaned up:  the speakers in the wall, the conduit holes for wiring, plus there were actually speakers mounted in the ceiling back near the closet doors — seen post-patching in the image below. That built-in speaker motif was then carried through to the main room. There were four speakers in that room. Here’s a pic from the original real estate listing showing the space as the POs had it setup.  The large black cabinet in the right corner housed a stereo and TV #11.  All the speakers were thus wired to that corner of the room. When they moved out we were left with a snakey pile of wires.  Here’s a shot post-flood/pre-renovations of the mass.

Originally we thought we should keep the speakers and rerun the wiring to a better part of the space, but then a WTF thunderbolt hit us and we just wanted the speakers gone. Considering the POs propensity for using underpowered amps to drive speakers at high volumes and thus cause them to blow out, we were not at all surprised when our contractor removed the speakers from the walls and we learned that they were just inexpensive units from Auvio and Radio Shack. Finally after all the holes were patched our contractor sealed up the giant hole where the silly door once was.  He later textured that space as well as all the patches so that when we were finally ready to paint the space everything blended almost seamlessly. Then we continued to wait….and wait…for the new windows to arrive.