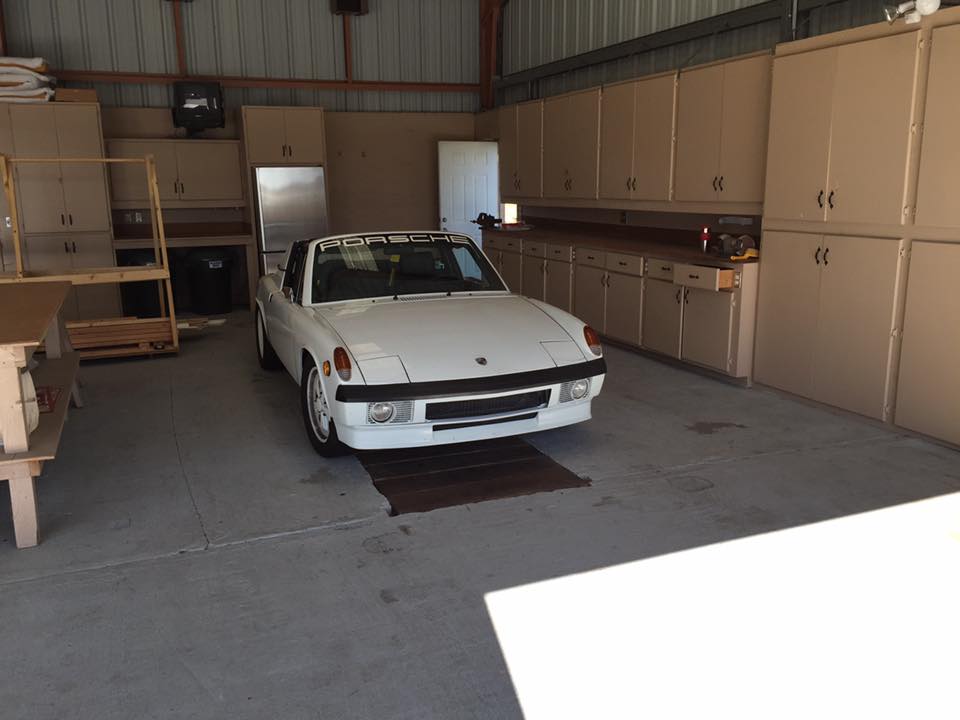 AS has  been spending his free time doing his own bit of nesting, organizing his office space and the garage.  About six weeks ago I bought 20 sections of shelving from a mob advertising on Craigslist.  They delivered everything to us and AS assembled a few sections and this is what things on the left side of the garage looked like up until last weekend.

Then AS’s dad arrived and the fence obsession began, but now that AS’s dad is back in .au, and while we still need to paint the new fence rails and there are still several sections that need work, the focus has shifted back to finishing some house/garage stuff.

Last weekend AS completed Stage One of the garage nesting.  First he pulled out the Volvo’s and the 914 and Barbie out…For those that don’t know the Volvos are the Whale (#245)–the LeMons race car driven by a team from BDR, and the eventual replacement Volvo (which donated it’s engine to the Whale after the camshaft in the Whale’s previous engine broke/died/failed in a catastrophic manner.)  Barbie is our durable Ford F150 which we bought just after closing on the house, and the 914 is the project car–it has a Chevy 350 in it and is currently midway through a carburetor to fuel injection conversion project (currently on hold due to the whole “zomg we bought a house” thing we’ve been doing for the last six months.)

With the cars out of the way, Agent Smith put together more shelves in the back left section of the garage.  This created a spot for the Volvos to rest yet still be accessible and easily moved over to the pit. It also created a space on the front side for our daily driver cars and the motorcycles.  All the lumber that was once stored on a crappy A frame cart is now up on the shelves and somewhat organized.  Most of the stuff that was strewn about during the moving process is slowly making its way to the shelves.

Here’s a shot of the right side of the garage with the mini truck in the back ground straddling the pit.  This side is now “open for work”.

The bikes were moved over by our cars, and Barbie and the 914 now park in the front middle section.  The next stage of the garage project will mean pulling out that closet thingy in the back.  It’s cumbersome and not very useful.  Plus it takes up a lot of space. The big tables that came with the garage may then go into that space as work benches.

Now the big goal this week will to wash the cars and cover them, as the only problem with the garage is it’s so big, stuff can get really dusty.  Of course as I finish this post…it’s actually pouring outside.  Doesn’t really affect my ability to wash the cars as I just use 1/2 a bucket of water and some No Rinse, but it does mean I’ll get wet if I go out to wash them now.