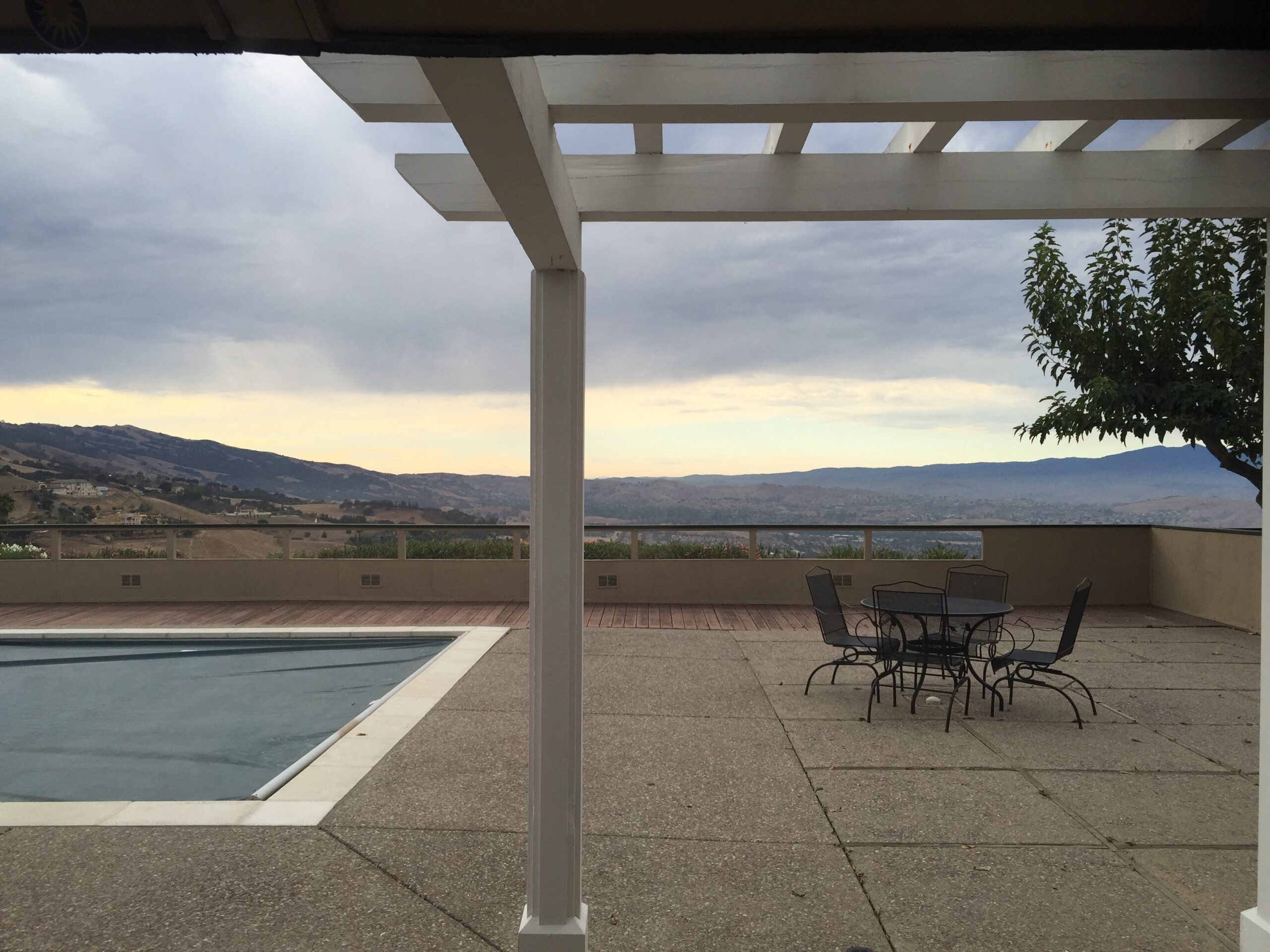 I’ve been working on lining up contractors for a couple of projects and thus have no big news to share. Instead I have a few random pool bits from the last few weeks…

We recently had a small adventure with the pool chemistry.  Because the POs deferred just about all maintenance, our pool circulation pooped out a few weeks back (one-way valve flapper broke loose and got stuck).   We got things fixed (and put in new filters) but it meant we lost circulation for a week.  After a tech from Genie Pools (2/9/2020 edit: they’re no longer in business) came out and got things running again, we made several trips down to the local Leslie’s Pool and had several talks with the staff there (who by the way are awesome).  Now we have a much better understanding of what water we have and how to manage it.  Because we’re on a well, we don’t have normal water. While our Cyanuric Acid and Hardness are high, our free Chlorine is low, but we have no solids and a near perfect pH.  (Yeah for having a lovely new cover.)  This week when I did my swim workouts, the water was perfectly clear if a tiny bit chilly.  I have a nice full coverage wetsuit on order now from Kiefer.

In other pool news, we set about figuring out what is going with the lights in the pool.  It is slightly strange that the pool lights are powered off a breaker in our pantry’s breaker box.  (We have one main electrical panel and then two sub panels in the house, plus one in the Studio and two in the garage.)  The rest of the pool equipment (pump and such) hang off breakers in the Studio.  This is because the lights and that breaker box are original to the house, while the current pool equipment and the Studio were just put in a few years back. Anyway, we called Genie Pools for help as AS took the lights out of their cavities last weekend and discovered that because the POs were so cheap they reused the the O-Ring/seal when they replaced the bulb the last time instead of paying money for a new one, water leaked into the housing and it and the wiring to it are completely toast.  Genie then had their electrician visit us yesterday and they’re going to work up a quote that will move the Pentair control box a few feet to the side, wire it up properly (as of course it’s not wired properly as this was something the POs put in after all) and then rewire the pool lights to the same breaker box and put in LED units in to replace the old housings/setup.  We figure it’s something that is better to get sorted now rather than later.

In other news, we had real rain here almost two weeks ago.  So much so that I had a heck of time getting the water off the pool cover.  We ended up buying a little Blue Wave Dredger sump pump.  Now I just need to rain again so I can test it out.

As for the hot tub that came with the house:  it is well and truly dead. Considering it’s over 30 years old, not too surprising.  The plastic is so old it’s disintegrating, so we’ve started shopping around for a new one, but putting a new unit in will mean ripping out the horrible deck currently built around the existing one.  What was it about awful decks that the POs loved so much?  One over the septic tank, one around a hot tub, and let’s not forget the awful one on the side of the pool or the unsound observation platform at the corner of the great wall….

In other water news…we have Flushmates in every one of our four toilets.  Because we’re on a well, and even though that well is 200 feet above the house in elevation, we still have less water pressure than your typical home (we peak around 47psi).  The Flushmates are great for making sure we have a strong sturdy flush every time and we use less water.  We’ve been having issues with one of the units (of course it would be the one in the master bath.) This morning though, AS took it apart and of course the “Flush Valve Cartridge” came apart and left bits of itself in the tank.  Access to the tank is through an opening less than 3″ in diameter, so enter the stega with tiny hands and all the bits were soon retrieved and reassembled.  For now, the unit is working normally again.  Huzzah.

Sadly, another part of the master bathroom is not so easily fixed are the stinky sinks. Since taking possession of the house there has often been a nasty sewer smell emanating from the sinks in our bathroom.  Various drain de-clogging solutions seemed to fix the issue, but it would return a few weeks later.  I had a plumber out last week though to finally figure out what is going on and it turns out we have a broken drain vent pipe.  The PO’s would have known of this issue, but did they tell us? Of course not!  The most amazing thing is that they renovated that bathroom one year ago (permit is dated 10/14 and inspections were done 1 month later) so either a) it was broken during the renovation or b) it broke while they were then living here for another six months.  They of course did nothing about the issue.  Since I have a copy of the permit and that copy has the firm that did the work on it, I will be calling Monday to get them to sort out the issue as well as one with the shower in that room.

Lastly, we have a reverse osmosis setup in our kitchen and of course, looks like PO’s failed to install it properly.  Things that should be installed vertically are in horizontally and we haven’t decided if we’re going to replace it with a better system or just replace the filter cartridges.  Right now though, because it wasn’t installed right and the filters need replaced, it’s making some very interesting noises.