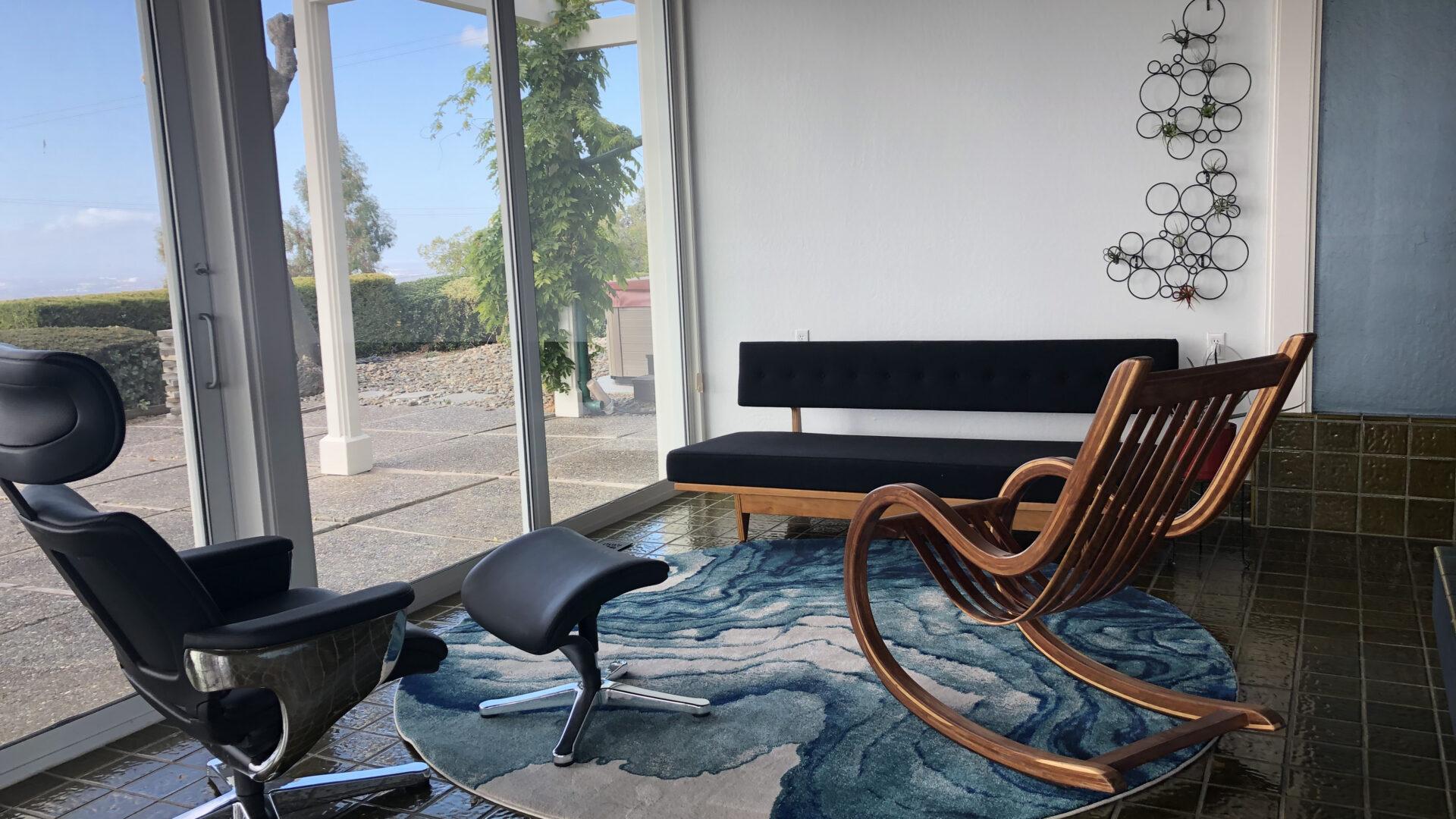 During the first few years that we were living here there was much discussion about what sort of furniture we wanted to purchase for the Great Room. We wanted any decor to be in keeping with the original early Mid Century Modern ethos of the space and if possible, we wanted to avoid buying just anything.

Up until May of 2019 about the only furniture in the space was the wee drop leaf table, the cafe table and chairs that came with the house, and a couple of what are technically patio chairs. When the great flood in the studio building happened we did end up with the black leather couches and our TV in the downstairs area, but that was only for a few months.

A friend of mine recommended several local auction houses here in the Bay Area. I started checking out their offerings since they post them online. A few months later a couple of interesting items popped up: some art (which I’ll detail in the next post) and a rather interesting dining room table. You can read more about that story here.

A few months later I managed to score a gorgeous not-your-grandmother’s-rocking chair, a wee side table, and our gorgeous Stein couch from the same Auction House. That story is here.

I also managed to find a few new items for the space. When at a World Market I found an armchair and a circular wall shelf. I ordered them online since they were large items and had them delivered.

A few other bits of furniture from were soon added: a late deco-style side table and a Danish Softline Pouf from auctions and thenan updated take on the classic Eames lounger chair that was an open box sale item from an online site.

At this point I knew I wanted to create/use circles in juxtaposition to all the existing squares in the space. Because the room is a giant box measuring roughly 26′ x 26′ x 24′ with the uprights creating 12 smaller squares in both the top and bottom sections, I figured circles would be a good contrast. Circles would also be a way to tie the Great Room and foyer into one space, as there was no “flow” between the two areas.

With that in mind I shopped for five new rugs for the space. I found two pretty abstract rugs for the downstairs area. One to go under the cafe table and chairs and another for the sitting area. Sadly one of them was more of an outdoor mat, so I had to find a second option. Then I found a pretty floral rug for the upstairs sitting area and a swirly patterned rug for the foyer. Finally, I splurged on a gorgeous oval braided rug for the dining area.

Continuing the circle idea, I found a metal trellis from Gardners.com. I mounted it above the new couch and it’s perfect for air plants. That couple with the mirrors placed around the metal tree I found on a trip to Florida as well as lots of plants and some small wall planters continued the circular theme downstairs.

Here are some pics taken shortly after the space was painted and the first bits and bobs added.

Furniture isn’t the only thing I’ve found at auction, as over the last two years I’ve found lots of interesting other things….