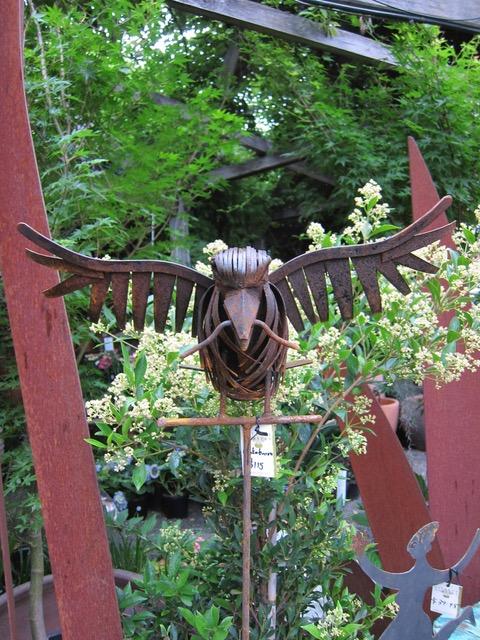 Way back in 2009 when Agent Smith and I were in Melbourne we came across a cute little metal sculpture and thought, someday, when we have a garden of our own, we’d like to have something like that in said garden.

Well back in April of this year when I was migrating from one photo management tool (Aperture) to another (Capture One), I came across a picture of the Kookaburra that I had taken.  I did some online sleuthing and managed to find the garden store we had seen it at and so I sent them an email asking if by some slim happy circumstance of chance they still had the item.  The kind staff at the Fitzroy Nursery wrote back to say that actually they had two in stock. One like the photo, which was a one meter rod and another that did not have a rod but could be put atop a pole or even a flat surface.

So the very next day I called them (they’re 17 hours ahead) and gave them my payment info.  One week later I got a package! Needless to say we’re delighted to have such a unique little sculpture that will eventually live outside in our garden area.  I say eventually as the landscaping project managed to stall out, and at the time of writing this post I’m in the middle of having fired our first architect, trying to get them to cough up copies of the work they we have paid for and they had done up the point of our firing them, while at the same time settling on a new firm that is more up to the unique task.